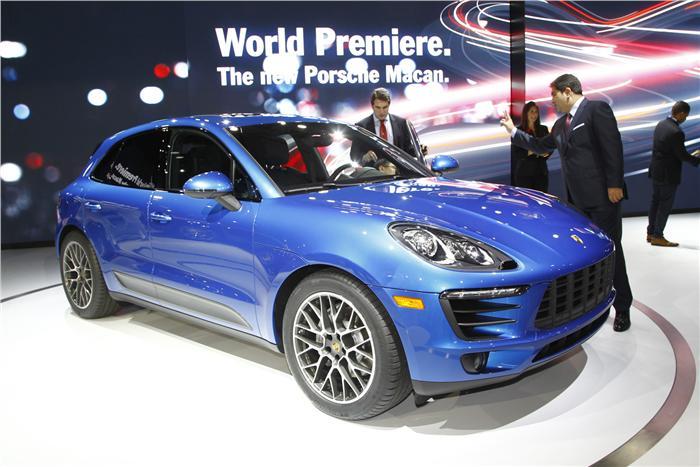 California's uniquely relaxed biennial car event this year clashed rather inconveniently with the Tokyo event, but seemed surprisingly unaffected by it.

It wasn't an easy competition to win. The battle might easily have been won by the surprisingly elegant-looking long wheelbase Range Rover, destined to make buyers happy on many an emerging export market, or the handsome-looking Jaguar F-type Coupé, which has a sense of rightness about its styling that eludes even the first-launched convertible version.

But while those are merely models completing a range: the Porsche represents a foray into a brand new model sector - that for compact SUVs - and if it achieves anything like the 50,000 annual sales Porsche bosses have been predicting, it will rapidly become the fastest-selling model in the marque's 65-year history.

On a balmy Californian open day which ended with a few unseasonal showers, most people agreed that, even if it wasn't exactly spectacular, the top-spec Macan Turbo made a good fist of embodying its makers' claims for 268kph performance and supercar acceleration with a squat, wide-shouldered shape that was purposeful and full of character. But, crucially, it was not so butch as to disenfranchise the many female users who will buy it and use it.

Two other cars stood out for leadership honours. The Ford Edge concept, an elegantly-chiseled SUV of about BMW X5 proportions that will soon come to Europe, and the new Kia K900 "full-size sedan" that combines a handsome exterior with a hugely spacious, well-equipped and crafted cabin to threaten the Lexus LS460 and Mercedes S-class in their traditional markets when it hits showrooms in 2015. It'll be powered either by a 5.0-litre V8 or a 3.8-litre V6, producing 420bhp or 310bhp depending on buyer choice.

There was another launch for the all-new Mark 3 BMW Mini, its Transatlantic launch only a couple of days behind the UK event (timed for Alec Issigonis's 107th birthday) on account of the fact that the US is now the largest in the world for the bumper-selling - but now slightly larger selling - baby hatchback.

Subaru also chose LA to show its next WRX performance car, an odd choice given that the hacking hordes were mustered in Tokyo at the very same time. The car received the usual boos from the people who should know better. Los Angeles isn't anywhere near the epicentre of car manufacturing in the US, or the world, but it is the biggest retail market for many of the most experienced premium cars. Whereas the pace is comparatively slow to reveal new production models, it is downright expert at producing imaginative custom concepts, as a hall dedicated to the modifying interesting cars made clear. A long-nose drag race creation featuring no fewer than four "Detroit iron" V8 engines was typical of the breed.

One hoped-for debutant was still a couple of weeks from launch, so was sadly missed from the show. That, of course, was the much-discussed but never scooped 2014 Ford Mustang, due to be revealed on December 5. New Ford group design boss Moray Callum was on hand in LA, but wasn't saying a word about it yet: the forthcoming launch is global, whereas California's show seems a shade parochial - and, in a curious way, all the better for it...​
You must log in or register to reply here.
Similar threads