Staff member
Virat Kohli was pleased to equal Viv Richards' record of being the fastest to 5000 ODI runs but added that he was still in the initial stages of his career and had a long road ahead of him. Kohli reached the landmark in his 114th innings, the same as Richards, when he scored 86 for India in the first ODI against West Indies in Kochi. 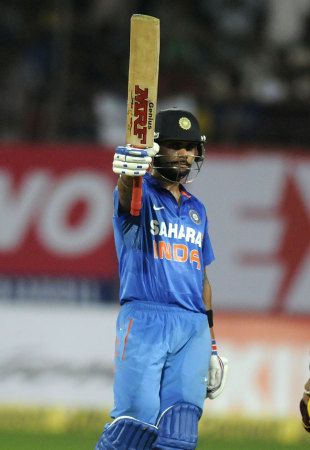 "I was told in Bangalore during the last ODI [about the record] but I did not really remember it because I do not approach a game thinking about records," Kohli said. "I said to myself that if you bat well, along the way these milestones are bound to happen. To equal a feat with a player like him [Richards] is a very good feeling but it does not stop here because it is more or less the beginning. I am only 25. It is nice to equal his record but still there is a long way to go."

Kohli and Rohit Sharma put on 133 for the second wicket to set up a victorious chase in just 35.2 overs after India's spinners restricted West Indies to 211. The visitors' modest total was in sharp contrast to India's previous ODI series against Australia, in which over 3500 runs were scored in 11 innings. Kohli credited India for adapting to the Kochi pitch that he said was different from the flat surfaces seen in the Australia series, during which the "momentum" had been emphatically with the batsmen.

"There was variable bounce on the wicket in the first innings," Kohli said. "Compared to that, it was better in the second innings. But the wicket was slow and the ball was turning. It wasn't a flat batting wicket. It wasn't a free flow of runs. It was a low total which is why maybe we finished it earlier. If they had 260-270 on the board it would not have been easy to chase it down in the time we did.

"The Australian series was more of momentum. Both the sides had momentum as far as batting is concerned. Everyone backed themselves and went for their shots. There was an air of confidence around that whole series that batsmen could go out there and express themselves. It was a great display of batting from both sides.

India motored home at a run a ball for the loss of only four wickets but Kohli did not think that was because the West Indies attack was lacking on control. "They have pretty experienced bowlers," Kohli said. "Ravi Rampaul...Sunil Narine is a very good spinner. Dwayne Bravo has got about 180-odd one-day wickets. Darren Sammy is a very clever bowler. In the Champions Trophy in England, their bowling attack was right up there. They were making teams struggle for their runs.

"We just batted well. I don't think they bowled too badly. We hit percentage shots and did not try to slog the ball and didn't try to play shots that were not on the merit of the ball. It was more of good batting than indisciplined bowling. Credit goes to our batters."

Before Kohli and Rohit dominated, India's spinners took eight West Indies wickets for 117 runs in 31.5 overs. MS Dhoni, the India captain, said it was the slow bowlers who set the game up for the batsmen to polish off a modest chase. "We didn't start very well, with the ball coming on nicely," Dhoni said. "There was a bit of variable bounce which assisted our fast bowlers. Overall, I think the spinners did the job and kept the pressure on.

"It was not easy for the opposition to rotate the strike, so they had to go for the big strokes. I thought it was a wicket where the spinners can do the job, so I thought let's start with [Suresh] Raina. He bowls slightly flattish and can be of good effect with the variable bounce. The first wicket he got [Marlon Samuels], it didn't bounce much.

"I think they [Shikhar Dhawan, Rohit, Kohli] have been batting really well. Again Virat was brilliant. I thought our bowlers did well and the batsmen negotiated the new ball really well. There were not many runs to be scored, but still they batted really well, especially against Narine who was spinning it both ways."[/img]
You must log in or register to reply here.
Share:
Facebook Twitter Pinterest WhatsApp Share Link
Top