Khalsa College: A beacon of light

Khalsa College: A beacon of light
The institution, established in 1892, played a key role in the freedom struggle. Today, it has carved a niche for itself in the educational scenario, reports Varinder Walia 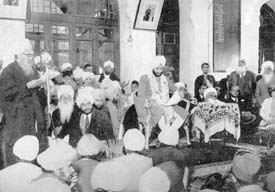 A file photo of Maharaja Yadvinder Singh, great-grandfather of Captain Amarinder Singh, shows him reading the annual report of the college in 1939. Also seen in the picture is Principal Jodh Singh, who is presenting the report. ​
Very few persons know that the first four principals of the 114-year-old Khalsa College, founded on March 5, 1892, by the then-Lieutenant-Governor of Punjab, Sir James Broadwood Lyall, were Englishmen! ​
These four principals were Dr Johan Campbell Oman (1898 to 1899), M.G.V. Cole (1900 to 1910), R.G.Wright (1910 to 1915) and G.A.Wathen (1915 to 1924). However, Colonel W.R.M. Holroyd was the Founder-President of the Governing Council of the college, while Dr William H. Ratigan succeeded him.
After the Englishmen, Rai Bahadur Manmohan, Principal of Government College, Gujarat, became the first Indian to be appointed the Principal of the college.
Sardar Bahadur Bishan Singh became the first Sikh Principal in 1928.
Bhai Jodh Singh took over in 1936. He will always be remembered for his professional commitment.
Mr Inder Singh (1952-1957), Dr Harbant Singh (1958-1961), Mr Balwant Singh Anand (1962-63), Mr Bishan Singh Samundri (1964-1969), Mr Sham Singh Kapur (1970-1971), Dr Harbans Singh (1971-1975), Mr Gurbax Singh Shergill (1975-1989), Dr Harbhajan Singh Soch (1989-1995) and Dr Mohinder Singh Dhillon (1996-2003) have left indelible imprints so far as the making of Khalsa College is concerned.
The basic aim of starting the college was to spread modern education among the Sikhs.
Today, the college, built in the typical Sikh architecture style, has carved a niche for itself in the educational map of the country.

Architectural marvel ​
The college building, a unique architectural monument, is tourists’ delight. Bhai Ram Singh, Vice-Principal of the Mayo School of Arts, Lahore, was the spirit behind the architectural marvel of the college.
The main building is a masterpiece of the Sikh architecture.
Bhai Ram Singh was entrusted the work of planning the college building, while Sardar Dharam Singh Gharjakhia, a reputed engineer, was specially transferred from Bannu to Amritsar to supervise the construction of the college.
Sir Sunder Singh Majithia, a renowned Sikh, was the man behind the foundation of the college.
He became the honorary secretary of the college in 1902. The present President of the Governing Council, Mr Satyajit Singh Majithia, is the grandson of Sir Sunder Singh Majithia.
Dr Daljeet Singh, the Principal of the college, said that Khalsa College owed its remarkable academic achievements to a galaxy of inspiring teachers.
Freedom saga
Khalsa College played a pivotal role in India’s freedom struggle. In 1921, the students and teachers of the college registered their protest against the British rule by boycotting the visit of the Prince of Wales to the college.
During his visit to Amritsar, the “Father of the Nation”, Mahatma Gandhi, did not forget to visit Khalsa College.
Mahatma Gandhi visited the college in 1920, a year after the Jallianwala Bagh massacre.
Among those who played the key roles in the freedom struggle included Partap Singh Kairon, Teja Singh Samundri, Sohan Singh Josh, Niranjan Singh Talib, Giani Shankar Singh, Mr Achhar Singh Chhina and former Speaker of Lok Sabha, Dr Gurdial Singh Dhillon.

The Tribune connection ​
A brief history of Khalsa College authored by Dr K.S. Bajwa takes a note of the key role played by The Tribune in selecting Amritsar (instead of Lahore) as the location for Khalsa College. “Rai Bahadur Bhagat Narain Dass, MA, wrote a pamphlet, ‘Amritsar versus Lahore’ and distributed it among Sikhs. Hundreds of telegrams were sent to the Lieutenant Governor and the Khalsa College Establishment Committee (KCEC) which appeared in the columns of The Tribune. Anti-Lahore articles often appeared, particularly from the pen of Amolak Ram of Gujranwala. On April 5, 1891, before the setting up of Khalsa College , a huge petition, about 2000-foot long, containing 46698 signatures was placed before the KCEC to plead in favour of Amritsar.”

College campus ​
Khalsa College is a composite institution with four wings consisting of faculties of Humanities and Social Sciences, Commerce and Business Administration, Sciences, the College of Agriculture and the Institute of Computer Sciences.
Besides, the campus houses the Khalsa College for Women, Khalsa College Girls’ High School, Khalsa College Boys’ Senior Secondary School and Khalsa College Public School.
The college campus covers an area of over 300 acres. With the persistent efforts of the Khalsa College Establishment Committee (KCEC), about 101 acre of land was purchased for Rs 10,000 in the village of Kot Sayyad Mehmood (now called Kot Khalsa).
The college has 86 classrooms, 10 tutorial rooms, 28 laboratories, a double-storey central library, a spacious conference hall and a seminar room equipped with audio-visual facilities.
The campus also houses a gurdwara, a gymnasium, a health centre and a dispensary, a dairy farm, a 220-acre students’ farm, besides a Botanical Garden, a swimming pool, a nursery, a fruit farm, a cricket stadium and well-maintained playgrounds and a well-equipped library. 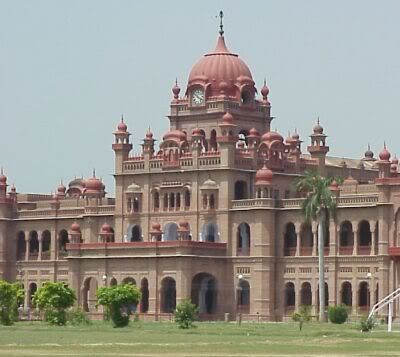