Khale saheb had his own style and uniqueness: Lata Mangeshka 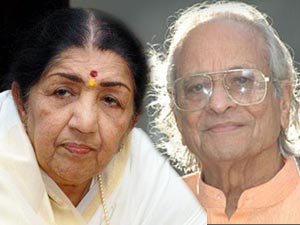 Bollywood singer Lata Mangeshkar has described music composer Shrinivas Khale, who passed away this morning at his residence in Thane, as one of the pillars of the golden era of Marathi music. The melody queen of India said that he had his own style and uniqueness and he has left his imprint for time immemorial.

Lata Mangeshkar said her family shared a close association with the musician since he moved to Mumbai. Talking to PTI, the singer said, "Khale saheb had his own style and uniqueness. He was not inspired by others nor did he copy anyone. There will not be another Khale in Marathi music.”

Shrinivas Khale had approached Lata Mangeshkar for a song 'Eka Talyat Hoti Badke' for HMV's album 'Panya Tuza Rang Kasa', but she could not allot dates for the recording, which was later sung by her sister Asha Bhosale and was very successful. She worked with him for the first time for the song 'Shravanat Ghan Nila Barasala' and later a movie song 'Ya Chimnyano'.

Shrinivas Khale was the only known musician to bring along two Bharat Ratna recipient singers Lata Mangeshkar and Pandit Bhimsen Joshi for a Hindi bhajan (devotional song) album Ram Shyam Gungaan. Talking about it, Lata said, "I was so scared when Khale saheb asked me to record with Anna (Pandit Bhimsen) as I thought I would not be able to sing alongside the legendary classical singer. However, Khale saheb handled me well and we recorded two duets. I had two solo songs as well in the album."
You must log in or register to reply here.
Similar threads