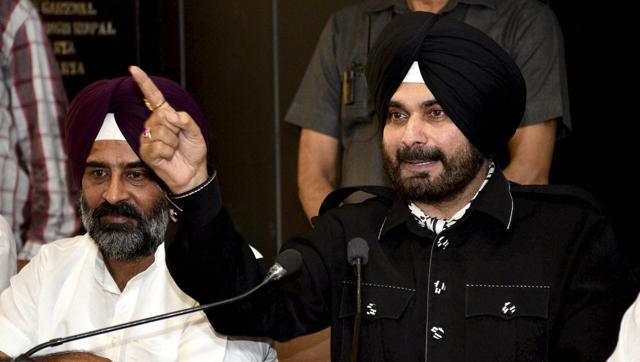 Aam Aadmi Party chief Arvind Kejriwal wants only “yes men” and asked Navjot Singh Sidhu to not fight the upcoming Punjab polls in return of a ministerial position for his wife, the cricketer-turned-politician said on Thursday.
At the launch of his new political forum Awaaz-e-Punjab , Sidhu said his dramatic resignation from the Rajya Sabha in July had nothing to do with Kejriwal, quashing months of speculation about him joining the AAP after quitting BJP.
“Kejriwal told me don’t fight elections, ask your wife to contest, will make her a minister. I said Sat shri akal (goodbye),” Sidhu told reporters.

“Kejriwal ji tweeted about meeting me, but he said half truth. Let me complete it. My resignation had nothing to do with Kejriwal ji.”
The three-time MP from Amritsar has joined hands with three top voices against the state’s ruling Shiromani Akali Dal-BJP alliance -- former India hockey captain and suspended Akali MLA Pargat Singh and Ludhiana-based powerful independent state lawmakers and brothers Simarjeet and Balwinder Singh Bains.
“It’s time to speak the truth… There is a tradition in India that good people are kept as decoration pieces and used only for campaigning… Awaaz-e-Punjab is a revolutionary voice,” Sidhu said.
He repeatedly attacked the ruling Badal family, which he held responsible for putting the state in “dire straits”.
“The government should be for the people but in Punjab it is all about one family,” the former cricketer said.

Punjab goes to the polls early next year and the AAP and Congress are looking to end a decade-long rule by the Badals. The young AAP has been on the rise with thousands flocking to its rallies but has been hit recently by controversy surrounding the removal of its state chief.
Sidhu’s rumoured induction into the AAP was supposed to boost the party but the 52-year-old’s new forum may shake up the state’s political landscape so far dominated by the SAD-BJP alliance and the opposition Congress and AAP.​