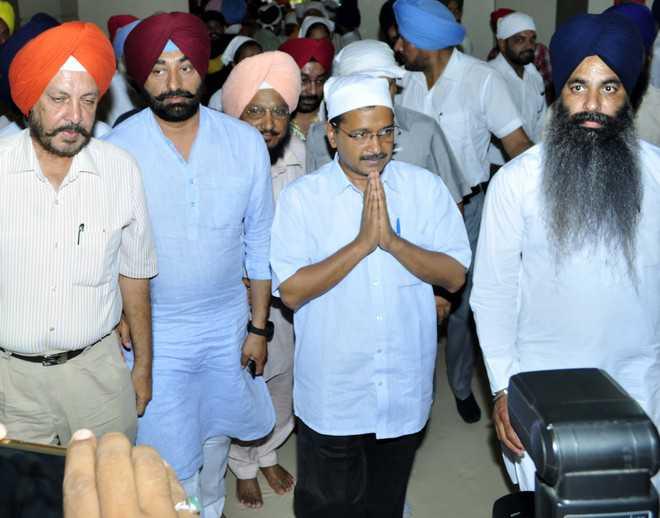 Amid heavy security arrangements, Aam Aadmi Party national convener and Delhi CM Arvind Kejriwal today met Sikh preacher Ranjit Singh Dhadrianwale at Gurdwara Parmeshwardwar here today.
Kejriwal was accompanied by state party leaders Sucha Singh Chhotepur, HS Phoolka, Sukhpal Khaira and Balbir Singh.
In an apparent attempt to play safe over the sensitive issue, the Delhi CM straightaway headed for a close-door meeting with Dhadrianwale, which lasted for about 45 minutes.
After the meeting, Kejriwal left in his car without talking to the media persons.
Dhadrianwale later said: "Ever since I was attacked, leaders from all major political parties are coming to meet me to express their solidarity."
He said: "I still maintain that I will not support any political party. As far as launching an agitation is concerned, we are still planning. But it will be completely peaceful."
On Akal Takht summoning him and head of Damdami Taksal Harnam Singh Dhumma, Dhadrianwale said he was yet to decide on it. "Mediation is necessary when two parties are at loggerheads with each other. I have till date not named any person or institution for planning a murderous attack on me. It is the duty of the state government to expose the assailants."
Woman journalist hurt
A woman journalist of a news channel, who tried to talk to Kejriwal, was hurt in the process. Some security guards allegedly pushed her aside and the front tyre of Kejriwal's car also reportedly ran over her foot. She was later admitted to a private hospital. An unidentified driver has been booked for negligence.
Delhi CM trying to fish in troubled waters: Capt
Chandigarh: Punjab Congress president Capt Amarinder Singh on Wednesday questioned the Delhi CM Arvind Kejriwal's locus standi in visiting Ranjit Singh Dhadrianwale. "Beyond your compulsive fondness to fish in the troubled waters you had no purpose in visiting the Sikh preacher as you could neither offer any solace nor any solution to him," Amarinder told the Delhi CM. "You could not find time to visit the spot of the killing of the Congolese citizen, who was lynched to death in your backyard (Vasant Kunj) and you spared a day to visit Punjab," he told Kejriwal, while questioning his "double standards". — TNS
Stay away from dera matters: Dr Gandhi
Patiala: On Delhi CM’s visit, local MP Dharamvira Gandhi said politicians were trying to take mileage out of such situations. He said their acts would promote enmity among Sikh sects, besides diverting people's attention from the failures of the Akali-BJP government. He warned the Congress, Akali Dal and AAP against politicising religious and dera matters. He said Punjab had already suffered a lot and nobody should be allowed to ignite fresh sectarian violence. — TNS
Phoolka defends visit
Muktsar, May 25
Senior advocate and AAP leader HS Phoolka today said Kejriwal’s meeting with Dhadrianwale was purely apolitical as they just discussed the “deteriorating” law and order situation in the state.
Phoolka said: “Earlier, we were comparing Punjab with Bihar. But now we say the state has become Afghanistan considering the prevailing situation.”