Jewel in the crown: Excerpt from Shashi Tharoor’s new book, An Era of Darkness 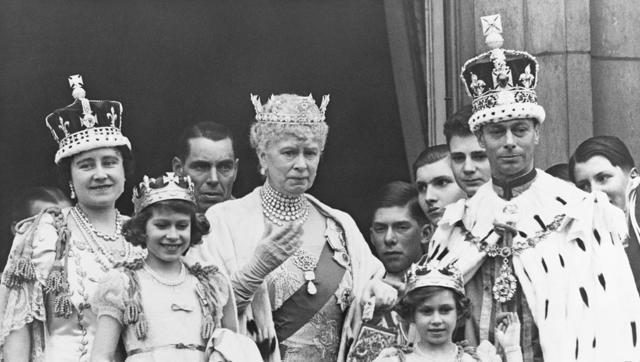 I shall say one last time that, in laying out this case against British colonialism in India, I do not seek to blame the British for everything that is wrong in my country today, nor to justify some of the failures and deficiencies that undoubtedly still assail India. There is a statute of limitations on colonial wrongdoings, but none on human memory, especially living memory, for as I have pointed out there are still millions of Indians alive today who remember the iniquities of the British empire in India. History belongs in the past; but understanding it is the duty of the present…

RETURNING THE JEWEL IN THE CROWN

So what do we do about colonialism, other than understand it? The issue of reparations, as I explained in the introduction, has been overblown: no accurate figure is payable and no payable figure is credible. My own suggestion of a symbolic pound a year may not be a practicable one to the finance ministries that would have to process it. An apology—an act of genuine contrition at Jallianwala Bagh, like Trudeau’s over Komagata Maru, might work best as a significant gesture of atonement. And a determination, in the metropolitan country, to learn the lessons of Empire—to teach British schoolchildren what built their homeland, just as German children are shepherded to concentration camps to see the awful reality of what their forefathers did. 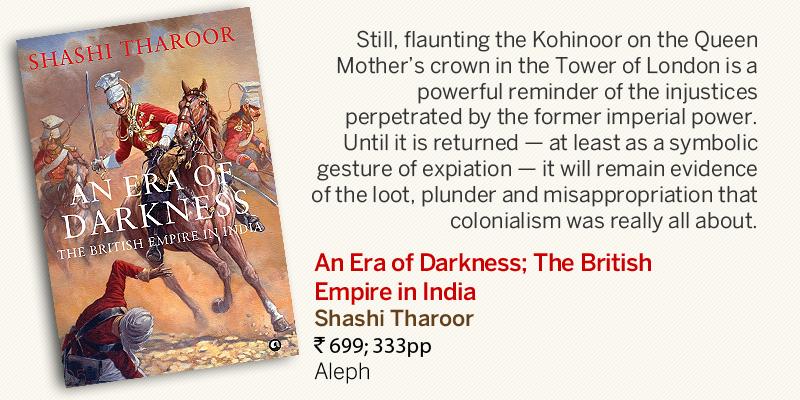 Another, of course, is the return of some of the treasures looted from India in the course of colonialism. The money exacted in taxes and exploitation has already been spent, and cannot realistically be reclaimed. But individual pieces of statuary sitting in British museums could be, if for nothing else than their symbolic value. After all, if looted Nazi-era art can be (and now is being) returned to their rightful owners in various Western countries, why is the principle any different for looted colonial treasures?
Which brings me, inevitably, to the vexed issue of the Kohinoor in the Queen’s crown.
The Kohinoor was once the world’s largest diamond, weighing 793 carats or 158.6 grams, when it was first mined near Guntur in India’s present-day southern state of Andhra Pradesh by the Kakatiya dynasty in the thirteenth century. (It has been whittled down to a little over 100 carats over the centuries.) The Kakatiya kings installed it in a temple, which was raided by the Delhi Sultan Alauddin Khilji, who took it back to his capital along with other plundered treasures. It passed into the possession of the Mughal empire that established itself in Delhi in the sixteenth century, and in 1739 fell into the hands of the Persian invader Nadir Shah, whose loot from his conquest of Delhi (and decimation of its inhabitants) included the priceless Peacock Throne and the Kohinoor itself.
It was Nadir Shah himself, or so legend has it, who baptized the diamond the Kohinoor, or ‘Mountain of Light’. An eighteenth century Afghan queen memorably and colourfully stated, ‘if a strong man were to throw four stones, one north, one south, one east, one west and a fifth stone up into the air, and if the space between them were to be filled with gold, it would not equal the value of the Kohinoor’. Upon Nadir Shah’s death, the diamond fell into the hands of one of his generals, Ahmed Shah Durrani, who became the Emir of Afghanistan. One of Durrani’s descendants was then obliged to cede the Kohinoor in tribute to the powerful Sikh Maharaja of Punjab, Ranjit Singh, in 1809. But Ranjit Singh’s successors could not hold on to his kingdom and the Sikhs were defeated by the British in two wars, culminating in the annexation of the Sikh domains to the British empire in 1849. That was when the Kohinoor fell into British hands. 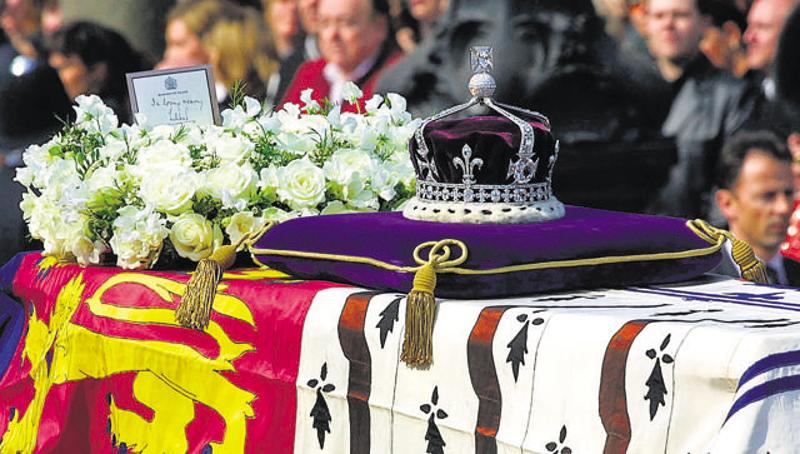 The startling statement in early 2016 by the Solicitor General of India — an advocate for the government — that the Kohinoor diamond had been gifted to the British and that India would not therefore seek its return, helped unleash a passionate debate in the country. Responding to a suit filed by a non-governmental organization, the All-India Human Rights and Social Justice Front, demanding that the government seek the return of the famed diamond, that the erstwhile Sikh kingdom in Punjab had given the Kohinoor to the British as ‘compensation’ for the expenses of the Anglo-Sikh wars of the 1840s. ‘It was neither forcibly stolen nor taken away’ by the British, declared the Solicitor General; as such there was no basis for the Government of India to seek its return.
The resultant uproar has had government spokesmen backpedalling furiously, asserting that the Solicitor General’s was not the final official view and a claim might still be filed. Indians will not relinquish their moral claim to the world’s most fabled diamond. For the Government of India to suggest that the diamond was paid as ‘compensation’ for British expenses in defeating the Sikhs is ridiculous, since any compensation by the losing side in a war to the winners is usually known as reparations. The diamond was formally handed over to Queen Victoria by the child Sikh heir Maharaja Duleep Singh, who simply had no choice in the matter. As I have pointed out in the Indian political debate on the issue, if you hold a gun to my head, I might ‘gift’ you my wallet — but that doesn’t mean I don’t want it back when your gun has been put away.

Reparations are in fact what many former colonies feel Britain owes them for centuries of rapacity in their lands. Returning priceless artefacts purloined at the height of imperial rule might be a good place to start. But the Kohinoor, which is part of the Crown Jewels displayed in the Tower of London, does pose special problems. While Indians consider their claim self-evident — the diamond, after all, has spent most of its existence on or under Indian soil — others have also asserted their claims. The Iranians say Nadir Shah stole it fair and square; the Afghans that they held it until being forced to surrender it to the Sikhs. The latest entrant into the Kohinoor sweepstakes is Pakistan, on the somewhat flimsy grounds that the capital of the Sikh empire, the undisputed last pre-British owners, was in Lahore, now in Pakistan. (The fact that hardly any Sikhs are left in Pakistan after decades of ethnic cleansing of minorities there tends to be glossed over in asserting this claim.) 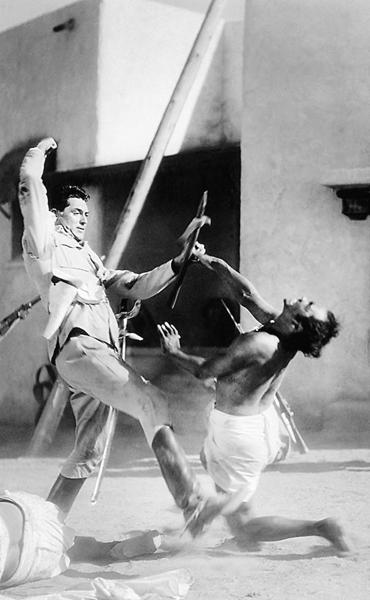 The existence of contending claims comes as a major relief to Britain as it seeks to fend off a blizzard of demands to undo the manifold injustices of two centuries or more of colonial exploitation of far-flung lands. From the Parthenon Marbles to the Kohinoor, the British expropriation of the jewels of other countries’ heritage is a particular point of contention. Giving in on any one item could, the British fear, open Pandora’s box. As former Prime Minister David Cameron conceded on a visit to India in July 2010, ‘If you say yes to one, you would suddenly find the British Museum would be empty. I’m afraid to say it [the Kohinoor] is going to have to stay put.’
And then there is a technical objection. In any case, the Solicitor General averred, the Antiquities and Art Treasures Act of 1972 does not permit the government to seek the return of antiquities exported from the country before India’s independence in 1947. Since the Kohinoor was lost to India a century before that date, there was nothing the government of independent India could do to reclaim it. (Of course, the law could also be amended, especially by a Parliament that is likely to vote unanimously in favour of such a change, but that does not seem to have occurred to the government, which perhaps understandably fears rocking the bilateral boat. For the same reason, it has not sought to move the Intergovernmental Committee for Promoting the Return of Cultural Property to its Countries of Origin or its Restitution in case of Illicit Appropriation, a UN body that could help its case.) The Indian Solicitor General’s stand seems to have taken the sail out of the winds of nationalists like myself who would like to have seen items of cultural significance in India returned as a way of expressing regret for centuries of British oppression and loot of India. 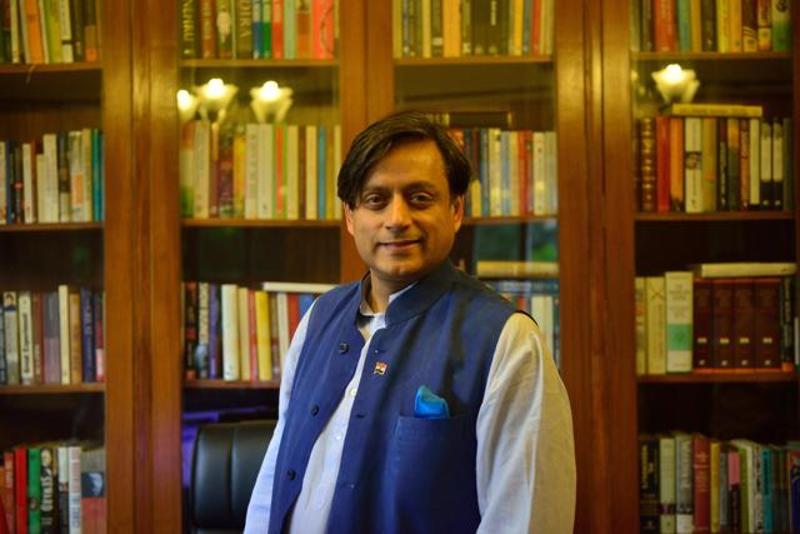 Still, flaunting the Kohinoor on the Queen Mother’s crown in the Tower of London is a powerful reminder of the injustices perpetrated by the former imperial power. Until it is returned — at least as a symbolic gesture of expiation — it will remain evidence of the loot, plunder and misappropriation that colonialism was really all about. Perhaps that is the best argument for leaving the Kohinoor where it emphatically does not belong — in British hands.
You must log in or register to reply here.
Similar threads