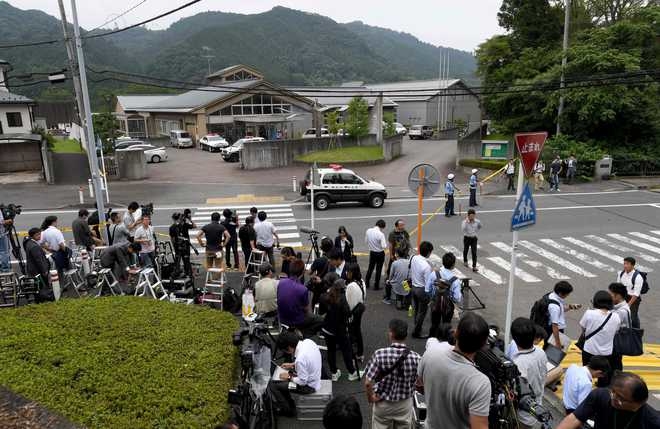 Nineteen persons were killed and 25 wounded after an attack by a knife-wielding man at a facility for the disabled in central Japan early on Tuesday, a government official said, in Japan's worst mass killing in decades.

The police have arrested Satoshi Uematsu, a 26-year-old former employee at the facility in Sagamihara, Kanagawa Prefecture, about 40 km southwest of Tokyo, a Kanagawa prefecture official said. Uematsu had turned himself in, the official told a news conference carried on public broadcaster NHK.

While all 19 had not yet been officially declared dead, they were all "in a state of cardiac arrest", the official said.

Another 25 people were wounded, 20 of them seriously, he said.


Japanese officials often describe people as being in cardiac arrest before they are officially declared as dead.

The Kyodo news agency says the dead ranged in age from 18 to 70 and included 10 women.

Staff called police at 2.30 am local time (1730 GMT, Monday) with reports of a man armed with a knife on the grounds of the Tsukui Yamayuri-En facility, media reported. The man wore a black T-shirt and trousers, reports said.

The 3-hectare (7.6 acre) facility, established by the local government and nestled on the wooded bank of the Sagami river, cares for people with a wide range of disabilities, NHK said, quoting an unidentified employee.

Another woman who said she used to work at the facility said many patients were profoundly disabled.

"They are truly innocent people. What did they do? This is shocking," she told Japanese television station TBS.

Police had recovered a bag with several knives, at least one stained with blood, the Kanagawa prefecture official said.

Asahi Shimbun reported that the suspect was quoted by police as saying: "I want to get rid of the disabled from this world." Other reports said he had held a grudge after being fired from his job at the facility.

Twenty-nine emergency squads responded to the attack, Kyodo reported, with those wounded taken to at least six hospitals in the western Tokyo area.

A man identified as the father of a patient in the facility told NHK he learned about the attack on the radio and had received no information from the centre.

"I'm very worried but they won't let me in," he said, standing just outside a cordon of yellow crime-scene tape.

The man, who arrived at the scene around 5 a.m. (2000 GMT Monday), said he had never heard of trouble at the facility before.

NHK reported that the facility is usually locked at night but the man broke into the building by smashing a window.

The facility's website said the centre had a maximum capacity of 160 people, including staff.

The US Army's Camp Zama base is near Sagamihara in the adjacent town of Zama.

Such mass killings are extremely rare in Japan and typically involve stabbings, due to Japan's strict gun laws.

Eight children were stabbed to death at their school in Osaka by a former janitor in 2001. Seven people died in 2008 when a man drove a truck into a crowd and began stabbing people in Tokyo's popular electronics and "anime" district of Akihabara.

A revision to Japan's Swords and Firearms Control Law was introduced in 2009 in the wake of that attack, banning the possession of double-edged knives and further tightening gun-ownership rules.

Members of a doomsday cult killed 12 and made thousands ill in 1995 in simultaneous attacks with sarin nerve gas on five Tokyo rush-hour subway trains.
Last edited by a moderator: Aug 29, 2020

Abe to resign over health, ending era of political stability

The race to replace the prime minister is intensifying, with Chief Cabinet Secretary Yoshihide Suga and former LDP Secretary-General Shigeru Ishiba in the frame.

Prime Minister Shinzo Abe, the nation's longest serving premier, said on Friday he is resigning due to health reasons. Here is what some international lead

The official campaigning to head Japan’s ruling party has begun with outgoing Prime Minister Shinzo Abe’s longtime right-hand man now seen as a front-runner to succeed his post and his unfinished jobs, including coronavirus and economic measures

Says fighting pandemic and turning around economy his priority Yoshihide Suga was elected the new head of Japan’s ruling party on Monday, virtually guaranteeing him parliamentary election as the country’s next Prime Minister.

TOKYO (AP) — The financial misconduct trial of former Nissan executive Greg Kelly began Tuesday with Kelly saying he committed no crimes and was only trying to keep his star boss Carlos Ghosn from...