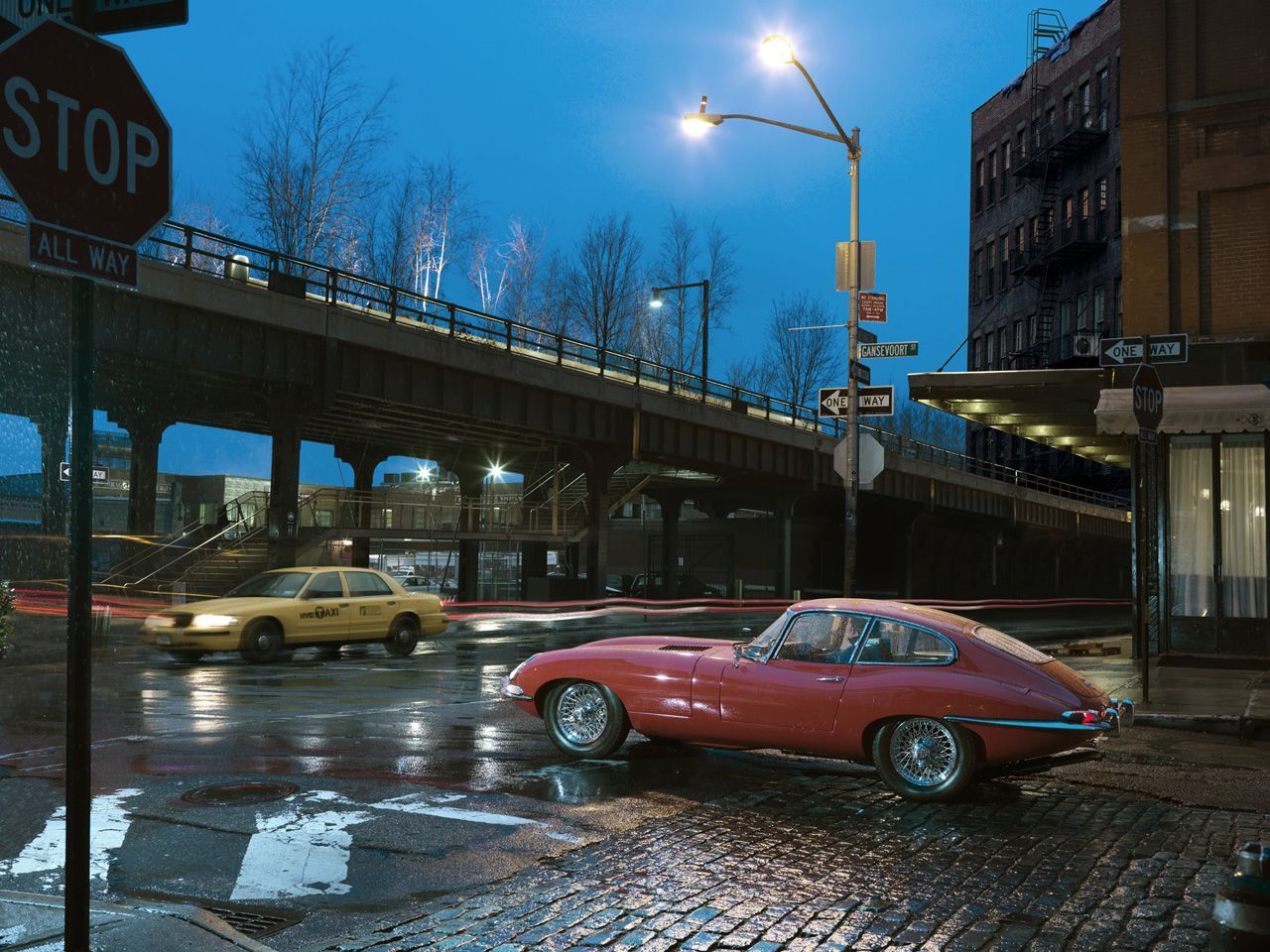 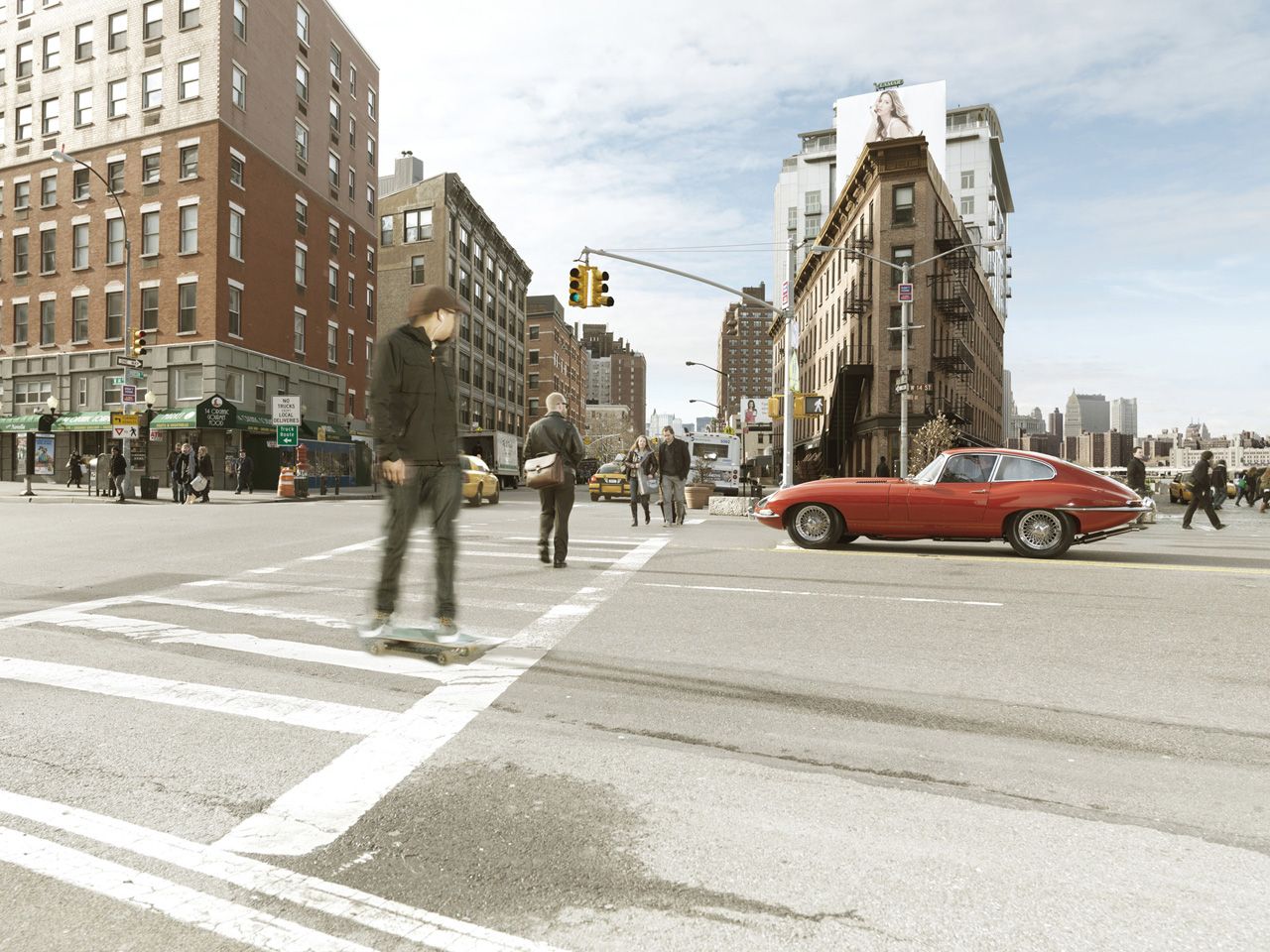 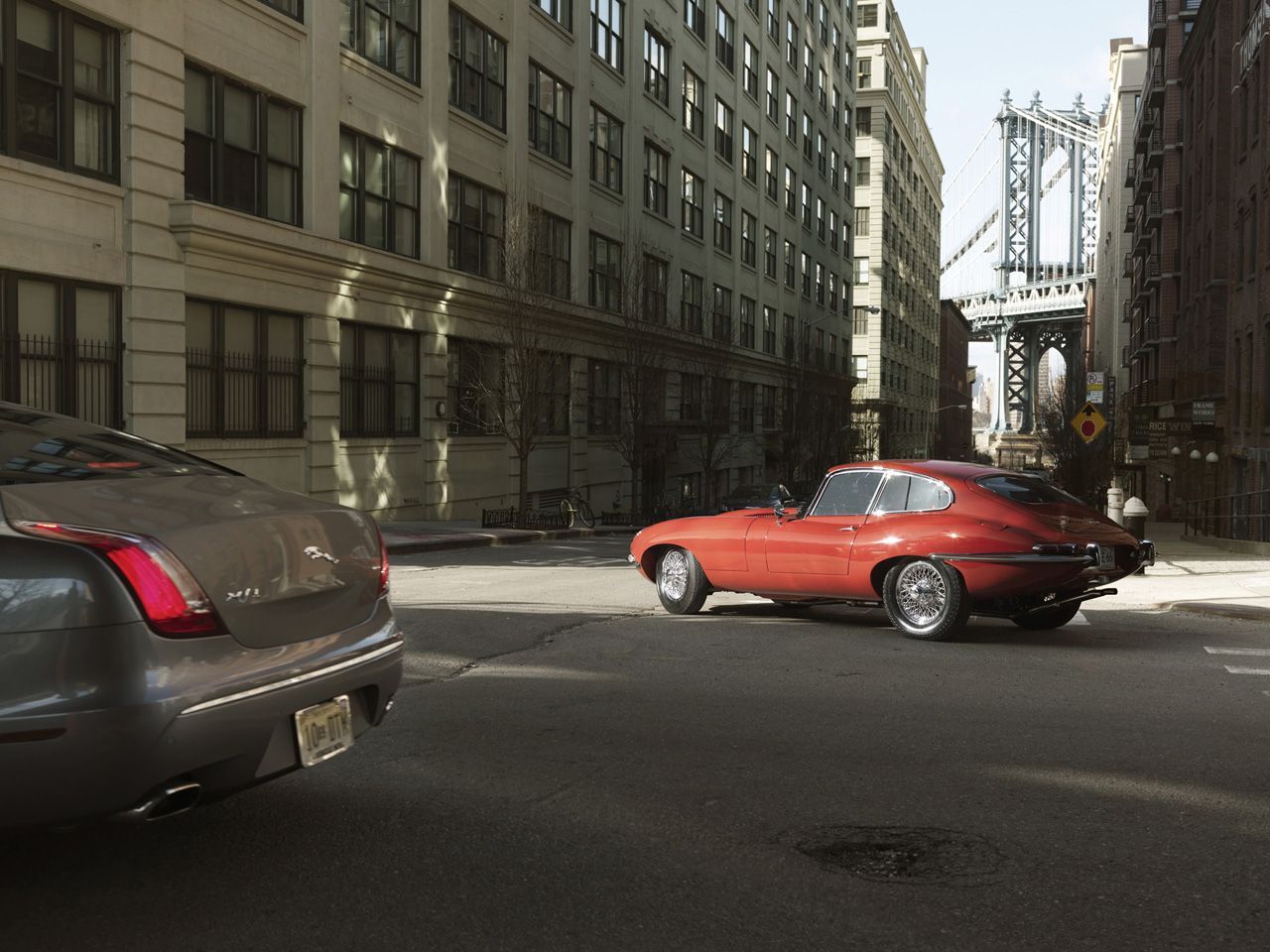 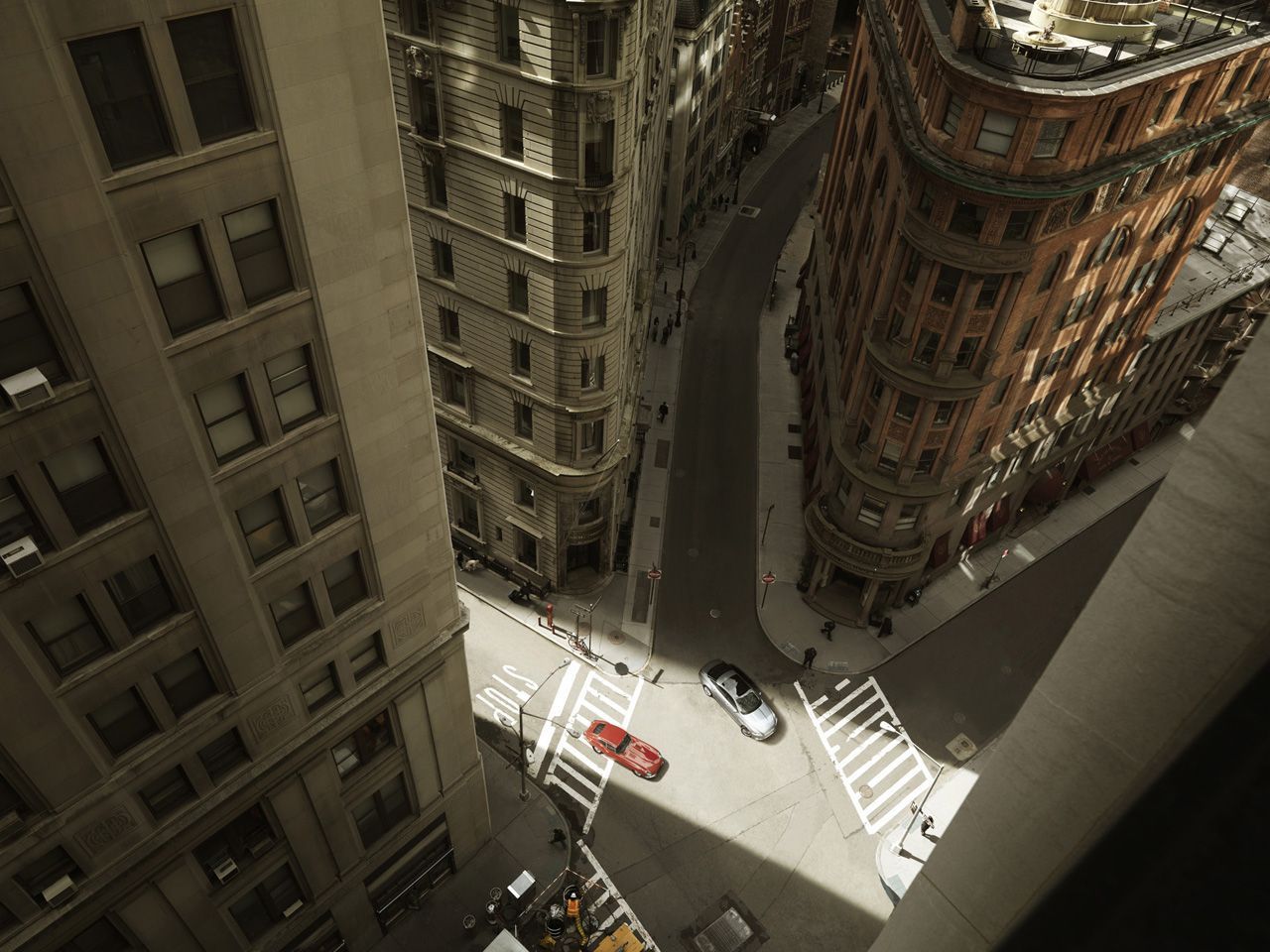 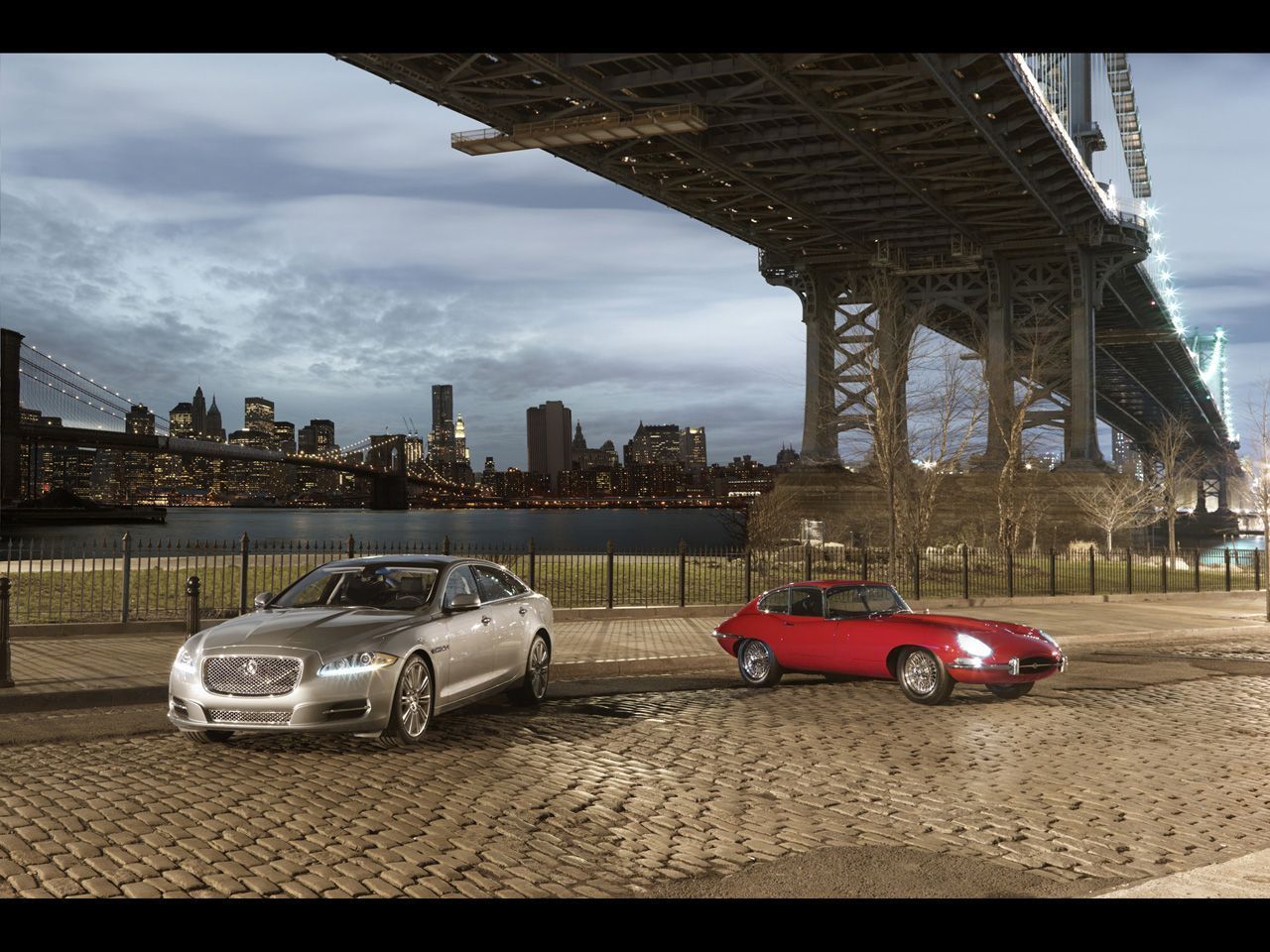 Fifty years ago, the New York Auto Show played host to the launch of an automotive classic: the Jaguar E-Type - or XKE as it was known in America.

If any country took the E-Type to its heart, it was the United States. More than two-thirds of all models built were sent across the Atlantic, establishing a special relationship that persists to this day.

On first sight of the E-Type at its launch, Frank Sinatra is reputed to have said: “I want that car and I want it now”, and old Blue Eyes was just one in a long list of Hollywood greats to covet the two-seater sports car. Steve McQueen, Tony Curtis, Britt Ekland and Brigitte Bardot were all celebrity owners.

The beauty, performance and passion that all Jaguars embody still resonates strongly in America to this day. The 21st century XJ limousine turns as many heads in New York with its lithe, powerful and captivating presence as the E-Type did when Sinatra first saw it 50 years ago.

Two cars, two eras, one company. Both are entirely of their time but, crucially, both are Jaguars and therefore share a definitive purpose – to be fast and beautiful.

Few companies are fortunate enough to have the design heritage enjoyed by Jaguar; one that stretches back half a century and more. It’s this visual integrity that allows comparisons to be drawn between the groundbreaking new XJ luxury saloon and the legendary E-Type sports car, a machine so beautiful that it holds a permanent place in New York’s Museum of Modern Art. These two cars may be separated by a gulf of 50 years, during which time the global automotive industry has changed beyond all recognition, but both are unmistakeably Jaguars.

Jaguar’s Design Director Ian Callum explains how two cars separated by more than a generation can share the same design philosophy: “Part of the purpose of a Jaguar is to look beautiful. We always tryto make our cars visually that little bit wider, lower and longer. That’swhat our proportions are about. When you see them together, the XJ and E-Type speak the same language.”

This is true even though the two cars fulfill very different needs. One is a high-tech limousine with sporting intent, whose unique flowing design is conceived to turn heads in the modern world. The other an iconic two-seater created for the ’60s boy (or girl) about town.

According to Callum, the E-Type demonstrates the overriding principle of sports car design: minimum bodywork encapsulating maximum performance. He explains: “The excitement and beauty of the car were almost created as a by-product. You’ve got beauty derived from its scientific purity of surface and excitement from its proportions.”

“We still work very hard to get the proportions of our cars as tight to the mechanicals as possible. Unlike the E-Type, of course, the XJ has to carry five people in total comfort but the principles of wrapping the body around the package to create exciting proportions are exactly the same now as they were 50 years ago.”

As envisaged by its designer, Malcolm Sayer, the primary aim of the E-Type was to be fast. Indeed, topping out at 150mph, it was the world’s quickest production car.

As an aerodynamicist, Sayer employed a uniquely scientific method of design, which involved the use of slide rules and logarithmic tables to plot the complex curves and straight lines that gelled so harmoniously to create not just the E-Type but its C-Type and D-Type racing predecessors.

“Malcolm Sayer shaped the E-Type with absolutely pure geometric lines,” explains Ian Callum. “He wasn’t driven by aesthetics for the sake of it, he was trying to build something that was shaped by mathematics. That’s how he built his cars up and their beauty is determined by purity and simplicity. That same restraint of line guides us to this day, in everything we do, as we create the next generation of Jaguars like the XJ.”

The E-Type, however, was more than the epitome of automotive beauty. It came to symbolise excitement, embodying Jaguar founder Sir William Lyons’ words that: “driving should be a pleasure not a chore.”

In its profile, stretched lines, prominent rear haunches and the arc of the rear window it was the archetype of sporting performance. The same is true of the XJ, which although it is very much a product of the 21st century, shares key styling attributes with the E-Type that have become firmly established in the company’s design language.

Flourishes such as the E-Type’s famous bonnet bulge – necessary to cover the straight-six engine – have been carried over to the XJ as a symbol of its potency. Both cars share the same sense of front-end drama to give that quintessential Jaguar ‘rear-view mirror’ presence.

Callum explains that it was Lyons’ ability to focus on the future that led to such distinctive designs:

“The E-Type was ahead of its time, just as the XJ is now. Williams Lyons’ philosophy was all about taking that next step. He was very adventurous and knew that it is Jaguar’s job to break the rules. He never looked back, always forward.”

A question Callum is often asked is whether he would design another E-Type. His answer is always the same: “I would refuse, it had its time and place. What I will do is create something as dramatic now as that car was then and I think the XJ achieves that.

Hailed as the architect of Jaguar’s future success, Design Director Ian Callum has a passion for the marque that stretches back to his formative years.

Having shown a talent for drawing from the age of four, it was as a teenager that Callum realised his calling lay in automotive design. Aged 14, he was inspired by the original XJ saloon, designed by Sir William Lyons:“That was a car of great proportions and excitement; it was the best looking and handling saloon in the world at that time.”

This prompted the youthful Callum to send Bill Heynes, Jaguar’s engineering guru, some of his own designs. In response Heynes advised Callum that in order to pursue his dream career, he should study engineering draughtsmanship and industrial design.

Callum earned a place at the Glasgow School of Art in Scotland, followed by a Masters degree in Design at the Royal College of Art in London. After graduating, he designed cars for Ford, Tom Walkinshaw Racing and Aston Martin. In 1999, a mere 30 years after seeking Heynes’ advice as a young boy, Callum was appointed Design Director of Jaguar. He had moved into his dream job.

Callum recognises the huge legacy left in his care by men such as Lyons, Heynes and Jaguar design legend Malcolm Sayer, insisting that it is their determination to explore the possibilities of design and performance that inspires his work today: “I know how intently my predecessors pushed the boundaries. Jaguar has always been a forward-thinking company and that philosophy guides us now.”

Despite the ever greater legislative, safety and comfort constraints on design freedoms, in just over a decade at the helm, Callum has created an award-winning range of Jaguars that capture the drama and passion of the cars of old while remaining entirely focused on the future. As Callum explains: “My task is to look forwards. The car I am most proud of is the next one.”

Created without compromise, Jaguar’s flagship XJ limousine is a class-leader in the mould of Jaguars of old and yet is a beguilingly cutting-edge offering that places its rivals firmly in the past.

The XJ’s construction is as innovative as its appearance, utilising state-of-the-art techniques pioneered by Jaguar. Crafted from high-grade aluminium, the car is lighter than much of its opposition by up to 150kg with the commensurate gains in performance, agility and economy. Up to 50 percent of the structure is made from recycled aluminium allowing for a potential saving of up to 3.3 tonnes of CO2 per car.

In order to maximise the potential of its class-leading architecture, the XJ is powered by the latest highly-efficient Jaguar AJ-V8 petrol direct-injection engines, in both naturally aspirated and supercharged forms. Smooth and powerful, these provide effortlessly refined performance.

Once inside, passengers will find themselves cocooned in unparalleled luxury. Bathed in natural light from the panoramic glass roof, the interior is meticulously crafted from the finest materials in a manner that is strikingly contemporary.

Standard and long wheelbase versions are available, while new for the 2012 XJ range is the Rear Seat Comfort package, which offers an advanced new entertainment system, as well as electric recline, lumbar adjustment and massage functions.

Jaguar is justly renowned for its innovation and the company has, in the cockpit of the XJ, created a haven in which cutting-edge technology is unobtrusively and instantly at the command of the driver. In place of the traditional instrument panel is a 12.3-inch high-definition virtual information interface that can be customised to display a range of driver-critical information.

A range of premium surround-sound entertainment systems is topped by the 1200W, 17-speaker system from British experts Bowers & Wilkins and provides concert-hall levels of audio fidelity. All infotainment systems feature hard disc-based music storage and connectivity for audio and video devices via a powerful Media Hub.

The E-Type is still revered as the ultimate artistic fusion of mechanics and mathematics and if proof were needed of its aesthetic credentials, it came in 1996 when it was the subject of an exhibition at New York’s Museum of Modern Art.

Entitled Refining the Sports Car: Jaguar’s E-Type, this was only the third time a car had been exhibited at the museum and was made possible by the donation of an opalescent, dark blue 1963 Open Two-Seater to MOMA by Jaguar.

The exhibition traced the genesis of the E-Type’s design and engineering from that of the revered 1950s C-Type and D-Type endurance racers with which it shared a stylist in aerodynamicist Malcolm Sayer. Alongside the flawless E-Type was an example of its legendary, race-winning, straight-six engine, images of its predecessors and original engineering sketches.

The E-Type was one of the first production cars designed along aerodynamic principles, worked out by Sayer using complex mathematical equations to design the ellipses and other elements that defined the car’s timeless appearance.

The organiser of the original exhibition, Assistant Curator of the Department of Architecture and Design, Christopher Mount said: “Rarely has a car inspired the kind of passion in both motoring enthusiasts and the general public that the Jaguar E-type has. Even today, the E-type is considered an icon of the post-war British sports car.”

The E-Type was so well received that it is now on permanent display at MOMA.