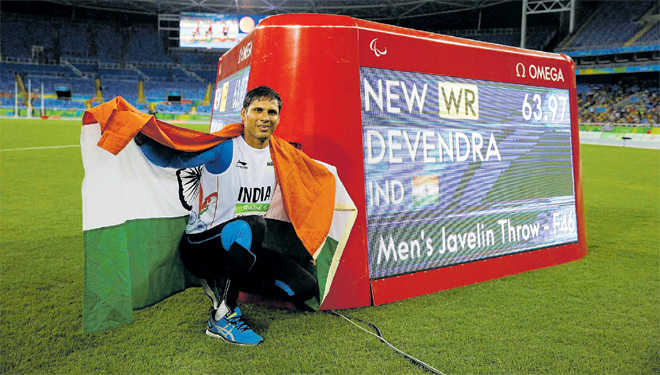 Javelin thrower Devendra Jhajharia’s “deal” with his six-year-old daughter propelled him to win a record second gold medal in the Paralympics.
Jiya, who would accompany Jhajharia for training in Rajasthan, struck a deal with her father that if she topped in the LKG exam, he would have to win the gold in Rio.

“She proudly phoned me to announce ‘I’ve topped, now it’s your turn’, something that kept echoing in my ears when I entered the field at the Olympic Stadium,” Jhajharia, the only Indian to win two gold medals in Paralympics, said after winning the men’s F46 javelin throw.
“She will be the happiest person. I will wait for her to wake up and speak to her,” he said after breaking his own world record he set in Athens in 2004. Devendra stayed awake the whole night and kept talking to his family and well-wishers till 5 am in Rio.
His world record throw of 63.97 metres came in his third attempt as it bettered his own mark of 62.15m that he had produced for his maiden gold at the Athens Paralympics in 2004. It was a long wait for the 35-year-old, who did not feature in the previous two Paralympics with the event missing in the Games programme.
To keep himself in shape and injury-free during this period, he followed an intensive training and rarely visited home, a village in Churu, Rajasthan. So much so that his two-year-old son Kavyan does not recognise his father. “Hopefully, I will be able to spend some time with them now,” says Devendra.
Devendra trained during April-July in Kuortane, Finland, where he became friends with Kenyan thrower Julius Yego. “He would tell me his story of penury and how he learnt javelin throw by watching YouTube... it was quite an inspiration. He would tell me I would win the gold at Rio. He got the silver."
Devendra is all praise for his personal coach at SAI, Hisar, Sunil Tanwar. Devendra’s left hand had to be amputated when he was eight after he accidentally touched a live cable.
You must log in or register to reply here.
Similar threads
Punjab News Sidhu-ਕੈਪਟਨ ਮਾਮਲੇ 'ਤੇ ਕਾਂਗਰਸ ਪ੍ਰਧਾਨ ਦਾ U-Turn
Four Dead, Several Injured As Protests Against Dilution Of SC/ST Atrocities Act Turn Viole
Tamil Nadu Villagers Turn To Ancient Water Technique To Save Themselves From Drought
The great engineering dream loses steam as more students turn to arts
24-year-old quits IAS to turn free e-tutor
Share:
Facebook Twitter Pinterest WhatsApp Link
Top