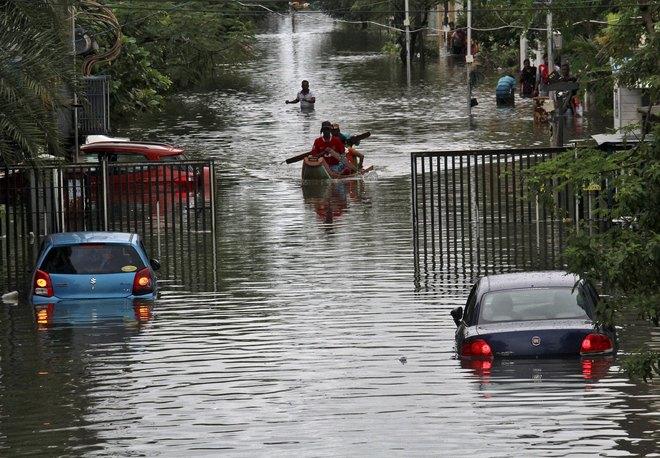 The Army, Navy and the Air Force today came to the rescue of thousands of people, including hospital patients, severely hit by heavy rain in Chennai that has left several parts of the city submerged.
The Chennai airport has been shut till December 6. The city resembled an island as unprecedented rain in the city broke a 100-year record. Crucial road and rail links have been snapped, the airport shut and thousands rendered homeless in Chennai and its suburbs.
Editorial: Cost of unfettered greed: Uttarakhand, Srinagar, and now Chennai
Issuing a red alert for the next 48 hours, the India Meteorological Department said Tamil Nadu would not get any respite for the next seven days. Flood water reached up to the second floor of various housing board colonies on the banks of the Adyar as people climbed to the rooftops, waiting for rescue and relief in several parts of the city and its suburbs. Officials said the death toll due to the unprecedented rain had gone up to 197. Besides rushing in with rescue teams, the armed forces have also launched UAVs to assess the situation. Four columns of the Army, including troops from the Garrison Infantry Battalion located at Chennai and one column requisitioned from Bangalore, continue to carry out extensive rescue and relief operations at Tambaram, Mudichur, Manipakam, Guduvancheri and Urapakkam areas. With civil communication non-functional in several areas of Chennai, the Army is resorting to radio communication for coordinating rescue operations. Mobile telephony largely remained crippled because of failure of telephone towers and the landline phones in several areas went still because of the flood.
The Navy rushed INS Airawat with five additional boats besides six integral boats to bolster the rescue and relief efforts. The ship is also carrying 20 divers, medical supplies and other relief material, defence sources said. It is likely to reach Chennai by early tomorrow morning, they said.
According to the IMD, a cyclonic circulation in the Bay of Bengal, which has been responsible for the incessant rain, will persist for the next four days. The trough of low over the southwest Bay of Bengal and adjoining Sri Lanka off Tamil Nadu coast with upper-air cyclonic circulation over interior and neighbourhood continues to persist. Thereafter, the state will see an anti-cyclone activity that will be associated with "heavy rain" at some places. The next 48 hours are crucial, especially in the oversaturated areas, IMD chief LS Rathore said.
You must log in or register to reply here.
Similar threads
IPS officer's daughter threatens police constable in Chennai, says 'will get you fired'
A doctor extracts live cockroach from woman’s skull in Chennai
Worst over for Chennai as Cyclone Vardah passes, storm to move towards Karnataka
Chennai: Debt-ridden family of 4 found hanging at home after five days
Chennai: One killed, 10 injured as ‘drunk’ driver crashes Porsche into autos
Share:
Facebook Twitter Pinterest WhatsApp Link
Top