Innovations Do Not Need Money, Degrees Or Work Experience – 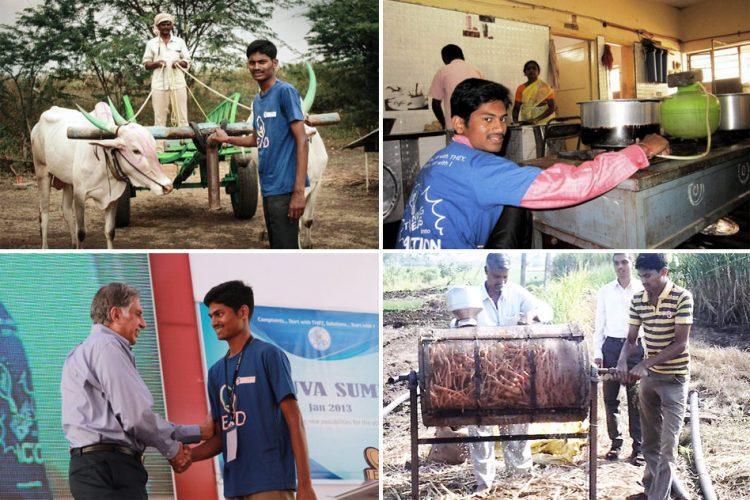 Santosh Kaveri is yet another innovator who proves that in every obstacle there lies a latent opportunity, if only it is tapped. One can overcome harsh financial background if one has the drive to succeed, helping hundreds in the process.

A resident from Belgaum in Karnataka, Santosh had to walk for 10 km everyday to attend school. Since he hails from an economically weak family, he had to work on his farm from a very young age. In order to work as well as manage his studies, he would wake up at 5 am. Later he got enrolled at Business Administration course of Samiti College Belgaum and also became an active member of LEAD (Leaders Accelerating Development), an initiative of Deshpande Foundation, Hubli. It was this organization which brought his innovative ideas to fruition.

Carrot Cleaning Machine:
This was the first innovation that Santosh made as a part of his first LEAD project. In order to make the carrots appealing to the customers at the local market, as many as 12 farmers are needed to clean one quintal (100kg) of carrots. Santosh wanted to save the time and labour in the process. He was inspired with an idea when he observed a washing machine one day and realized that the same technology could be used in cleaning the carrots, too.

However, adapting the technique of washing clothes to cleaning carrots resulted in 11 failed attempts first. Santosh did not give up and finally developed the carrot cleaning machine which requires only 2 people to clean a quintal of carrots in 15 minutes! Additionally, no electricity and very less water are needed. This has proved to be a boon for farmers in 10 villages and won him the Best LEADer award by Ratan Tata during the Deshpande Foundation’s 2013 Yuva Summit.

Eco Water Coil:
The first success at helping the farmers encouraged Kaveri to undertake other entrepreneurial initiatives. One such innovation is Eco Water Coil which is a stovetop device which performs twin functions at the same time – it boils water for cooking and collects hot water for bathing. According to Santosh, “In India gas is expensive, and no one seems to be concerned about that.” It was this concern which inspired him to develop a system which conserves gas, thus reducing the economic burden on farmers (they save Rs 1000 per month) while at the same time providing hot water for different purposes. Indeed, “necessity is the mother of invention”.

Brake System for Bullock Cart:
Yes, the term itself sounds paradoxical since we associate brakes with motor vehicles. Santosh has developed a brake system for bullock carts which does not require fuel, and so, is eco-friendly. A typical bullock cart is controlled using a rope which is inserted in the nose of the bull. It can be very painful for the animal and also requires a lot of labour by the driver, especially while loading or unloading goods from the cart when the cart has to be made to stand still, or moving up and down a slope. Using a foot brake would not allow the cart to move after loading.

This prevents any harm to the bulls and enables the driver to efficiently control the cart at the time of loading, unloading, moving up or down a steep slope and while turning in a short radius. More weight can be carried on the carts with less manual labour and at a total cost of Rs 4000-5000 per system. It also leads to reduction in bullock cart accidents.

Santosh Kaveri had won the Best LEADer Awad once again during Yuva Summit 2014 and Rs 1 lakh in the Master Of Social Entrepreneurship pitch your idea competition. It is no wonder since he chose not to concentrate on cities, which become the focus of developmental projects, and instead concentrated on remote rural areas of India. Instead of aiming for luxuries this young entrepreneur is working to uplift the farmers who constitute the backbone of Indian economy, overcoming all financial and other constraints. He also proves that innovations need not come only from scientists at a huge cost but even from a simple-guy-next-door at low cost. We need not wait for a college degree or work experience if we want to make a difference in the lives of rural Indians or those not as privileged as we have been. Thanks Kaveri for showing us the way!​
You must log in or register to reply here.
Similar threads