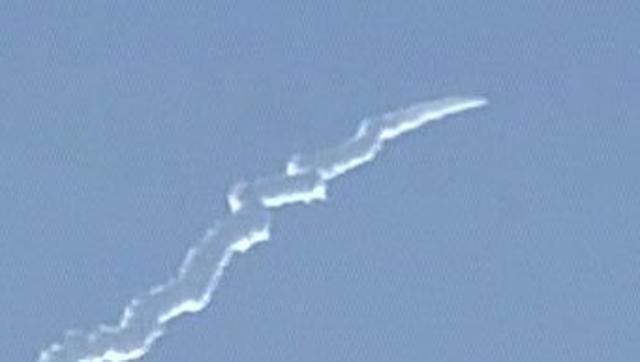 Isro successfully tested its first ever reusable launch vehicle in Sriharikota early on Monday morning.
The 6.5 meter long Re-usable Launch Vehicle - Technology Demonstrator (RLV-TD) weighs about 1.7 tons. The cost of this project is Rs. 95 crore.
Isro used a mini-rocket with a booster to fly the winged reusable launch vehicle into lower earth orbit for demonstrating the feasability of the technology.
The state-run Indian Space Research Organisation (Isro) has designed and built the 1.7-tonne RLV-TD as a flying testbed to evaluate technologies developed to reduce the cost of launching rockets for carrying satellites into the earth’s polar and geo-stationary orbits.
This will be the first time Isro will fly a winged body and bring it back to land on make-shift runway in the Bay of Bengal. However, in further tests an undercarriage will be placed to make it land, possibly at Sriharikota.
“The exercise will enable us collect data on hypersonic speed, autonomous landing an cruise flight using air-breathing propulsion,” Vikram Sarabhai Space Centre (VSSC) director K. Sivan had said ahead of the launch.
Space agencies worldwide spend, on average, $20,000 to make and use medium-to-heavy weight rockets to launch satellites.
The first technology demonstrator will conduct the hypersonic flight experiment, followed by landing test, return flight experiment and scramjet propulsion test, using a 15-tonne rocket with nine tonne of propellants (solid fuel) as a booster.
As the cost of access to space is a prohibitive in space exploration and space utilization, a reusable launch vehicle will be low-cost for on-demand space access.
The space agency’s telemetry, tracking and command network (Istrac) in Bangalore will collect data from the vehicle spanning vertical take-off, its release in space by the rocket booster for manoeurves and its plunge into the sea in the Bay of Bengal.
The vehicle, however, will not be recovered, being a ‘dummy’.
“In subsequent test flights, we will attempt to land the reusable vehicle at a specific location on land like an aircraft does on a runway so that we can again use it for launching more satellites,” Sivan had asserted.
The space agency is developing the RLV and its support systems from the budget earmarked annually for technology development and research and development.
The cost of developing the RLV technology is estimated to be about Rs.100 crore ($15 million).
Nasa, however, grounded its space shuttle programme in 2011 after using its reusable vehicles like Discovery, Endeavor, Columbia and Challenger as a space transportation system for over three decades since 1981 to launch various missions, including the International Space Station (ISS) and the Hubble telescope.​