India map according to Tamilians 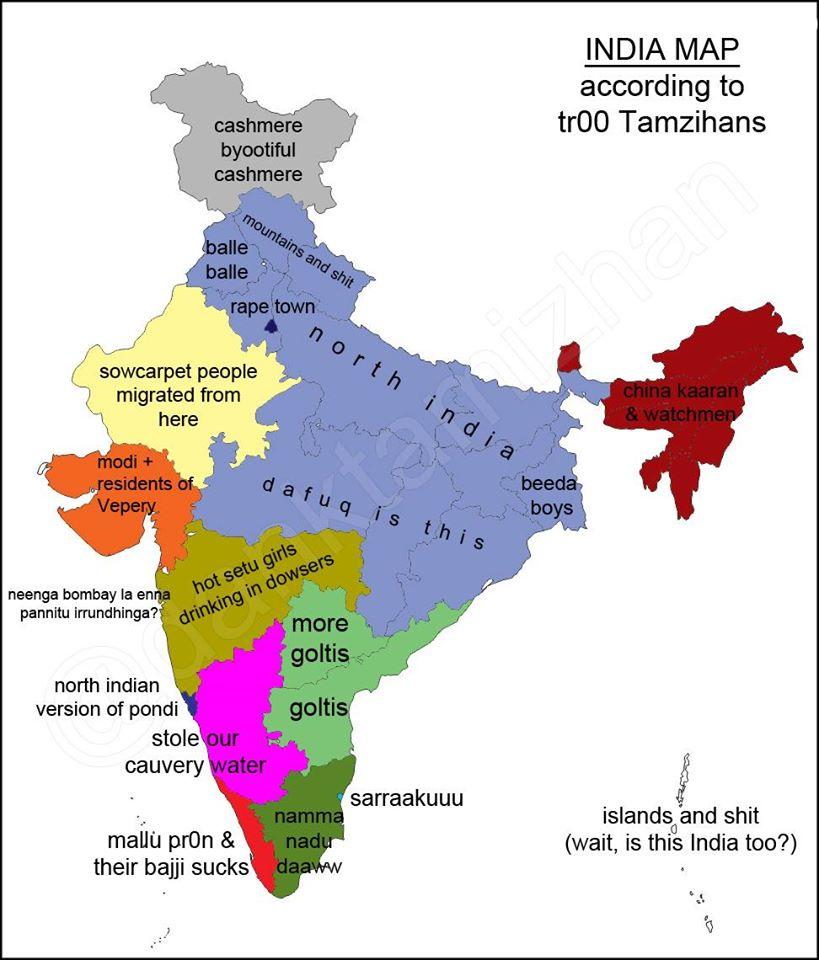 Kashmir: It's a famous yesteryear song from a film set in Kashmir. Recently one of our TN MPs sung this song in Lok/Rajya sabha and became laughing stock of the country.

Rajasthan: Sowcarpet is an area in Chennai heavily populated by Rajasthani ppl so...

North-east: China kaaran means guy from China, the usual racist things used to refer to NE ppl anywhere in India. Watchmen means, we have seen most working as Goorkhas/watchmen for building so.

Gujarat: Gujarat: Vepery is an area in Chennai where I guess many Gujjus stay? (not sure)

Mumbai: Famous dialog from Baasha(blockbuster hit Rajini movie, watch it if u havent its brilliant) where Rajini was a DON in Mumbai, then settles to a peaceful li(f)e in Chennai. His brother says this dialog to him which means "What were you doing in Bombay?" It's a very iconic dialog(I dunno why though)

WB: No idea wat beeda boys means, maybe most bengali ppl we know chew pan parak and spit it out? (Not sure)

Goltis: Te+lu+gu when read in reverse = gulute. That eventually mutated into gulti, and finally, golti. AFAIK it was just used to refer to telugu ppl without actually saying 'telugu' so that they dont notice. i guess even now its used in the same way.

Sarrakkuuu: How liquor is referred to in Tamil. You know Pondicherry-liqour-party connection

one good thing is that they recognize that punjab is a happy state. people sing and dance .

Staff member
India according to Punjabis bhi bana do

Doraemon said:
India according to Punjabis bhi bana do