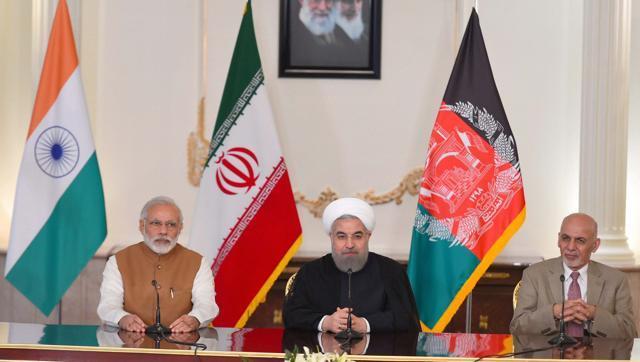 India signed a historic three-nation deal on Monday to develop the strategic port of Chabahar in Iran and build a transport-and-trade corridor through Afghanistan that could halve the time and cost of doing business with Europe.
Developing the Chabahar port is seen as crucial for India because it will not only allow New Delhi to bypass Pakistan and access global markets but also counter China’s expanding influence in the Indian Ocean region. But the project’s land route through Afghanistan remains a security headache.
“We want to link with the world. (The) agreement …can alter the course of history of the region,” said Prime Minister Narendra Modi after the deal was signed in the presence of Afghan president Ashraf Ghani and Iranian President Hassan Rouhani.
“Studies show that… the corridor could bring down cost, time of cargo trade to Europe by about 50%.”
Separately, Modi and Rouhani signed several deals, including on sharing intelligence to combat terrorism that was “rife and rampant” in the region as well as increasing cultural and technology contact.

India has watched with unease Chinese funding for a strategic port in Gwadar, Pakistan, which New Delhi believes will give Beijing access to the Indian Ocean area. The Chabahar port, New Delhi hopes, will help counter Chinese moves in the region.
New Delhi will spend about $500 million (Rs 3,400 crores) to develop the port in southeastern Iran’s Sistan-Baluchistan province as a regional trade hub that will allow it to open up an alternative land-sea route for trade with Afghanistan.
The three countries have engaged in protracted negotiations since 2003 but the lifting of sanctions on Tehran in January has boosted prospects of the port’s development.
India has already spent Rs 680 crore in building a 220-km highway in Afghanistan that connects to Chabahar but Kabul has warned New Delhi to be ready for possible attacks by Pakistan-backed elements to delay the project.
The Exim Bank of India also signed an agreement to provide Rs 1,000 crore credit line to the Iran’s Maritime and Ports Organisation for making jetties and berths at Chabahar.
State-owned construction firm Ircon signed an agreement to lay a rail line from Chabahar port to Zahedan and Nalco signed a deal to look at the possibility of setting up a 0.5 million tone aluminum smelter at Chabahar free-trade zone, provided Iran gives cheap natural gas.
“India and Iran have always focused to add strength to our relations, even during difficult times. Both countries can look to expand our cooperation in the fields of trade, technology, investment and infrastructure and energy security,” Modi told Iran’s IRNA news agency.
He also quoted a couplet from legendary poet Ghalib, “Once we make up our mind, the distance between Kaashi and Kaashan is only half a step.”
Reuters news agency also reported that Indian refiners cleared part of the Rs 43,200 crore owed to Iran for crude oil imports. This is the first payment to Iran by India since the lifting of Western sanctions against the Persian Gulf nation earlier this year.
India is one of the biggest buyers of Iranian crude, and is set to import at least 400,000 barrels per day (bpd) from Iran in the year from April 1. But it built up a backlog of payments when Iran was under sanctions.​