Can anyone post a video of someone teaching Gidha......... i know basic one but i want to learn the kind girls do in competitions and stuff...........SOMEONE PLZZZZZZZZZZZZZZZZZZZZ VIDEO PAADIYO.......

lolz thanks......i actually do know gidha i just want to learn the fast foot work........i know satwinder bitti had a video out where she teaches step by step by m not able to come across that video.......anyways thanks....

Every great art and craft in this world has to go through a long passage of evolution. Most of the popular art forms ancient and modern had a long history of evolution and transformation. “Giddha” happens to be the most popular and glamorous folk dance art of Punjab. Of course “Rome was not built in a day”, similarly “Giddha” in its magnificent choreography did not pop up overnight. It took centuries, if not millanniums to evolve. But the end product is a very eye catching experience. Well groomed “Giddha” dancers while performing are a treat to watch.

My late father Sardar Sochet Singh was a great thinker, philosopher and an excellent narrator of what he read, saw and knew. Once during the early seventies, I solicited his thoughts on the evolution of Punjabi folk dance “Giddha”.
He told me frankly that he has no definite knowledge about the time frame of the evolution and transformation of “Giddha”, but from what he observed and heard, he can give me his own hypothesis of the evolution of “Giddha Dance”.
In spite of a long centuries old history of prevalent girl child faeticide in Punjab, he explained that a girl child, after birth, had naturally become the dearest child to her father.
From the day of her birth to her playful childhood, her attraction towards the dolls, her playing habits and the daily chores that she performs, have all been dear to the father and all have gotten woven into the fabric of Giddha dance in one form or the other.

The grace with which the girl child walks and the style in which she runs, jumps and gets ecstatic, all these have entered Giddha dance in one form or the other. When two sisters or for that matter two friends hold each other’s hands in the form of a cross, the right hand of one girl holds the right hand of the other girl standing opposite to her and vice versa, the left hand of one girl holds the left hand of the other and they start moving rhythmically in a circular movement without loosening the grip, either in a clock-wise direction or in anti-clockwise direction, the action in Punjabi is called “Kikli”.
“Kikli” has also become a part of the overall mosaic of Giddha dance. Also when the hands of the two girls do not hold each other and the girls run in the same patternlike “Kikli” in a circle in either clockwise or counter clockwise direction, this action has also become an integral part of Giddha dance. Dancing without proper rhythm is a mockery of dance, it is true of “Giddha Dance” too. 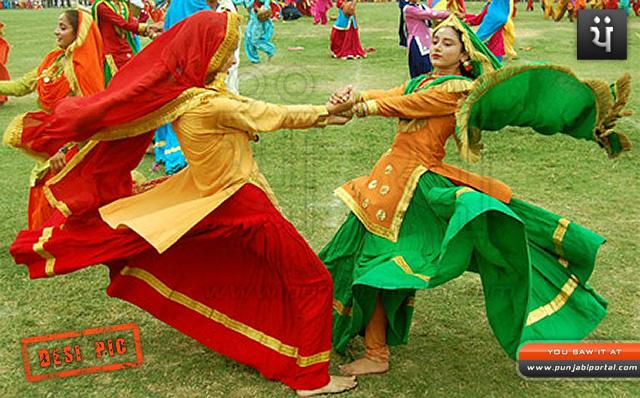 Until recently the girls (women) have been milking the cows and buffaloes in the privacy of their parental “Havelis” (stylish dwellings of the well to do). The rhythmic motion of milking the milch cattle has been incorporated into one of the several conspicuous features of Giddha dance. In the evenings, the girls used to boil the milk and prepare it for making curd (in America curd is called yogurt).
In the following morning, the curd is ready for making butter and butter milk. The girls transfer some of it into a burnt clay pitcher and then start churning it with a wooden vertical and round shaped piece called “Madhani”. The “Madhani” is lowered into the curd and moved alternately in clockwise and anti-clockwise directions with a thick cotton or jute string wrapped around it and held in both hands of the girl and after about half an hour of persistent churning, the butter gets separated from the churned curd.
Some water is subsequently added to the churned curd and it becomes buttermilk enough in quantity for quenching the thirst of a family for an entire day. The rhythmic churning action of “Madhani” by the women has also crept as a step into the Giddha dance.

Similarly, during the days gone by, the women used to grind their own wheat and maize floor. They used to operate a stone made round shaped grinder called “Chakki” by hand. The “Chakki” has the upper round shaped stone piece moving over the base circular stone piece. The rhythmic motion of the floor grinding wheel in a clockwise direction has also become a feature of Giddha dance.
Until about half a century ago, the women used to make their own cotton thread from raw cotton. For this purpose they used to operate spinning wheels in groups of two and more. The rhythmic motion of running the spinning wheels has also become a part of Giddha dance.


Sometimes, the girls make a “Masala” powder after grinding the traditional Indian spices. They put the whole spices in a thick stone bowl and start beating the spices with a thick round shaped wooden piece. First one girl lifts the wooden piece up a bit and then releases it over the spices, then the second girl, standing opposite to the first girl, does the same thing. This rhythmic action is repeated several times over until the spices get ground adequately. This action also has been incorporated into one of the several steps of the “Giddha” dance.
During the monsoon season in particular, the girls enjoy riding the swings with ropes tied to the higher branches of trees. This swinging action with two girls driving the swings in opposite directions has been incorporated in “Giddha” dance. In Bhangra, the beat is provided by a two ended large sized drum called “Dhol”. But in “Giddha” a smaller version of “Dhol” called “Dholaki” is used and “Dholki” is played by a girl. These days some other instruments producing melodious sounds are also used to enhance the effect of “Giddha” dance.
Some verses of rhythmic poetry are also narrated in set sequences by the “Giddha” dancers. One girl recites a couplet of poetry called “Boli”. After the “Boli” is finished, the other girls erupt in a vigorous dance. Once they finish their dancing steps, the other girl comes forward and recites another “Boli”. This is again followed by another spell of vigorous dance. Sometimes two girls branch out of the bunch and coming to the front they perform a set of synchronous dance sequences. The other girls stay behind. But after one group completes the act, that group recedes to the back. Then another group emerges into the front, performs similar acts and then recedes to the back.
Sometimes pairs of girls are replaced by trios. Some girls perform kite flying actions too. As the time is passing, just like any other art, “Giddha” is becoming more and more sophisticated and the number of must perform steps is increasing.

The “Giddha” dancers perform in circular, semi-circular, arcs, stars and diamond formations. Since it is not a competitive sport, there is no limit to the number of participants in the “Gidha” teams. The number can be as small as four and can go on to exceed twenty. If the performers are well trained, then the more the numbers of participants, the merrier the event is. “Jaago” is a tradition in the cis-Sutlej Malwa region of Punjab. One woman leads the group of dancers with a baked earth pot balanced over her head. The pot has a burning fire in it.
All the actions involved in this ritual held during the weddings, have creeped up in the “Giddha” dance sequences too. These days folk songs are also sung during “Giddha” dances. Some vintage recordings of legendry singers like Surinder Kaur and Parkash Kaur are played these days to accompany the “Giddha” dancers.
You must log in or register to reply here.
Similar threads
Help learning bhangra plz
Please Help Wedding Cards
Help please-Making Traditional punjabi wedding card
Help! Can someone please write "Ravi" in punjabi
Can anyone help me?
Share:
Facebook Twitter Pinterest WhatsApp Link
Top