hats off to Samaresh Jung 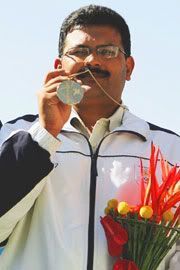 Samaresh Jung of India has been named as the winner of the David Dixon Award for the most outstanding athlete of the Commonwealth Games.

The David Dixon Award is named after the former Honorary Secretary of the Commonwealth Games Federation (CGF) and is the first of its kind for a multi-sport event.

All of the 71 competing nations and territories were asked to nominated one athlete for the award. All athletes are eligible regardless of their medal tallies.

The medal honours performance at the Games, fair play, and overall contribution to their team’s participation at the Games.
CGF President, Mike Fennell, said he was delighted that Samaresh Jung had won the second David Dixon Award.
"Jung is a remarkable athlete, who competed brilliantly in Melbourne, establishing a range of new benchmarks for his sport, and is an athlete the whole Commonwealth can be truly proud of,” said Fennell.

The Indian team came first in the Shooting medal tally, winning 16 gold, 7 silver and 4 bronze medals at the Games.