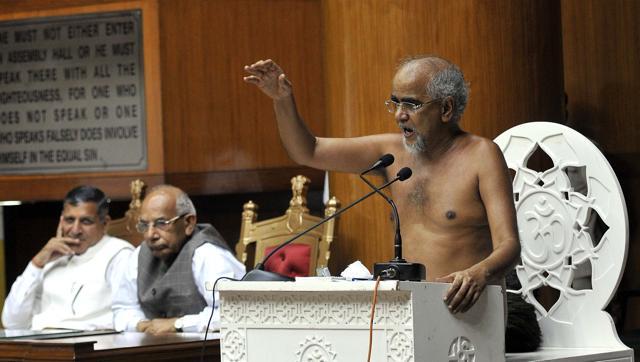 Known for his “kadave pravachan’’ (bitter discourses), Jain monk Tarun Sagar invited thunderous applause punctuated by laughter from MLAs belonging to all parties while driving home some political and social truths during a special event at the Haryana Vidhan Sabha on Friday afternoon.
It was the first time a religious leader addressed the House in its main hall. With this, the Bharatiya Janata Party (BJP) government set a precedent, after an all-party meeting gave its nod to the event.
After speaker Kanwar Pal adjourned the House for Monday, a temporary carved wooden partition was removed to reveal a dais placed at the VIP visitors’ gallery. Soon, the monk arrived wearing no clothing, as is the tradition among the sect. Introduced by chief minister Manohar Lal Khattar and welcomed by representatives of the ruling and opposition parties, the ‘muni’ took to the dais, with governor Kaptan Singh Solanki sitting next to him. 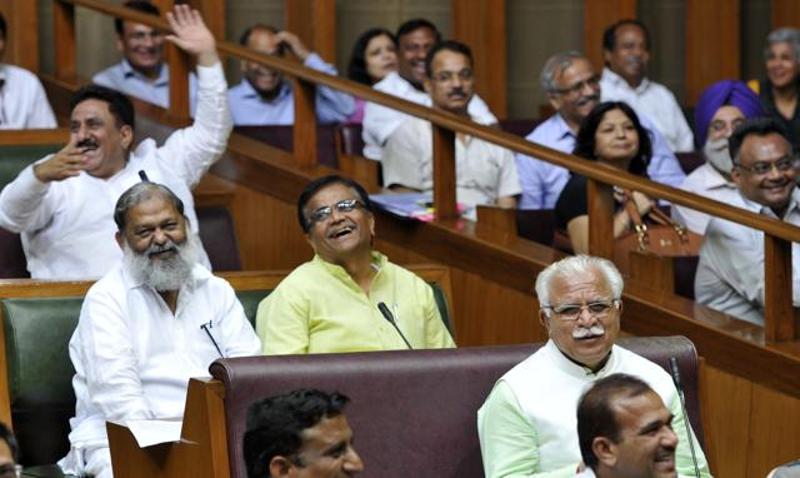 The discourse opened with the monk lauding efforts of Prime Minister Narendra Modi, leaders of Madhya Pradesh — where he recently delivered his first discourse in an assembly — as well as Solanki and Khattar. Referring to Modi’s slogan of “beti bachao, beti padhao”, Tarun Sagar lauded “daughters” Sakshi Malik and PV Sindhu for “saving India from disgrace” at the Rio.
Referring to poor sex ratio, the monk said there were not enough women to marry, even after subtracting Khattar and sports minister Anil Vij, who never got married. The House soon was reverberating with laugher.
The Jain ‘muni’ said to check the skewed sex ratio, he has invented a formula to be applied to politics, society and religion: politicians having daughters should be given preference, people should not marry their daughters in families not having daughters, and religious people should not take “b hi ks ha ”( donation) from families sans daughters. The message got an instant applaud from all MLAs.
Lambasting Pakistan for creating troubles for India, he said one who wrongs unintentionally is “agyaan” (ignorant), on the second time a “nadaan” (silly), more than twice a “shaitaan” (devil), and one who keeps doing it is “Pakistan”. He said one who keeps forgiving is “Hindustan”, inviting applause.
Also taking a dig at politicians, the Jain monk said happiness has deserted society because of degeneration all around, just like politicians disappear after they win the elections. He was quick to add that his simile did not apply to those present in the House. “But, I will say the same thing for every politician, but when I am elsewhere,” he made a parting shot, sending the House in splits.
The assembly officials had initially planned to hold the discourse in the Punjab lobby. The speaker even examined the proposed venue, but the neighbouring state, reportedly, did not accept Haryana’s request. Speaker Kanwar Pal said as such there is no rule for holding such events. He said a decision taken unanimously by the House could set a new precedent. On other religious leaders being invited for such discourses, he said not only religious persons but prominent personalities from other fields could be invited too.​
You must log in or register to reply here.
Share:
Facebook Twitter Pinterest WhatsApp Share Link
Top