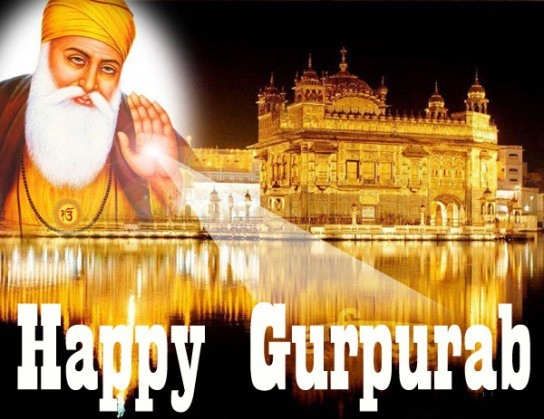 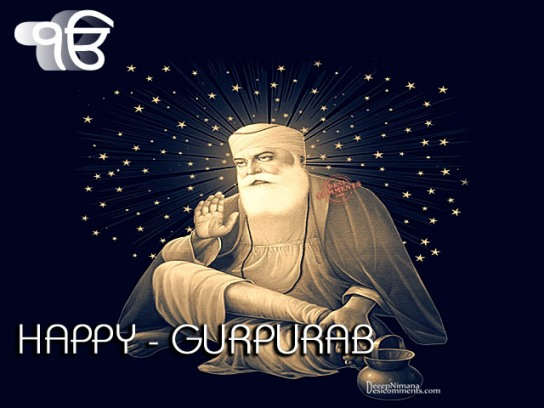 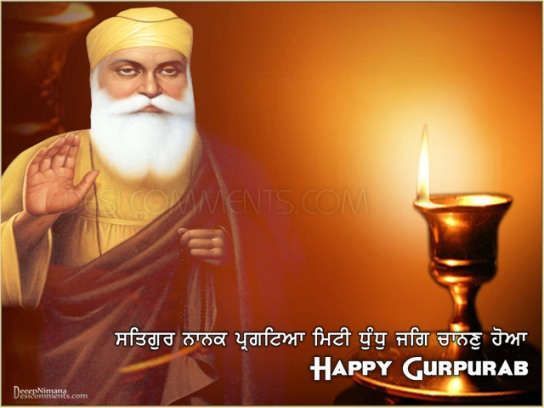 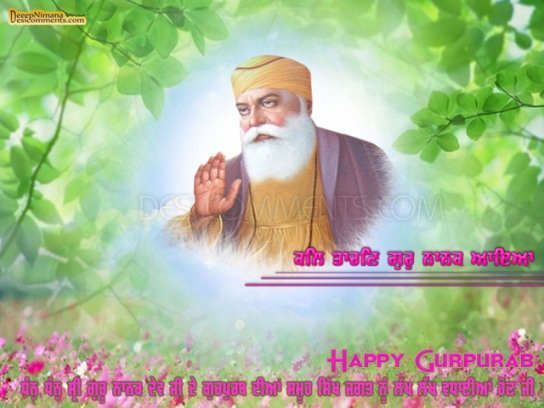 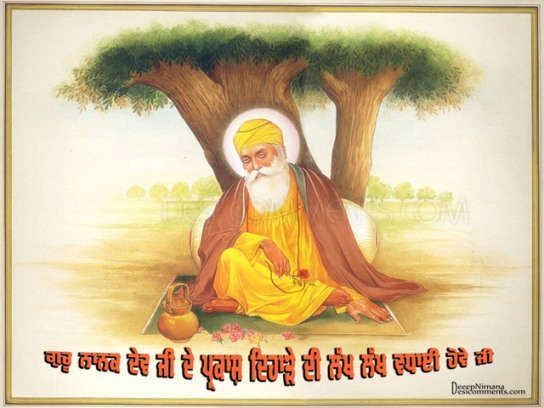 Guru Nanak was a reformer. He attacked the corruptions in society. He strongly protested against formalism and ritualism. He carried the message of peace and of love for everybody. He was very liberal in his views. He did not observe the rules of caste. He tried his level best to remove the superstitions of the people. He preached purity, justice, goodness and the love of God. He endeavored to remove the moral putrefaction that was prevalent amongst the people and to infuse real spirit in the worship of God and true faith in religion and God. He introduced the singing of God’s praise, along with music, as a means of linking the soul of man with God.


Nanak has given a beautiful summary of his teachings in one of his hymns as follows:—

Love the saints of every faith:
Put away thy pride.
Remember the essence of religion
Is meekness and sympathy,
Not fine clothes,
Not the Yogi’s garb and ashes,
Not the blowing of the horns,
Not the shaven head,
Not long prayers,
Not recitations and torturings,
Not the ascetic way,
But a life of goodness and purity,
Amid the world’s temptations.


"Vahe Guru" is the Guru Mantra for the followers of Guru Nanak. The other important Mantra for repetition is: "Ek Omkar Satnam Karta Purkh Nirbhav Nirvair, Akalmurat Ajuni Savai Bhang Gur Parsad—God is but one, His Name is true, He is the Creator, He pervades the whole universe, He is without fear, He is without enmity, He is immortal, He is birthless, He is self-born and self-existent, He is the remover of the darkness (of ignorance) and He is merciful". The Lord is eternal. He has no beginning and no end.


Guru Nanak invented the Gurumukhi characters by simplifying the Sanskrit characters. The holy Granth of the Sikhs is in Gurumukhi. It is worshipped by the Sikhs and the Sindhis. Every Gurudwara has a Granth Sahib. The holy Granth, popularly known as Adi Granth, contains the hymns of the first five Gurus. They were all collected, arranged and formed into one volume called Guru Granth Sahib by the fifth Guru. It contains a few selections from the hymns of Kabir and other contemporary Vaishnavite saints. Later on, the hymns of the ninth Guru were incorporated in the holy Granth by the tenth Guru. The compositions of Guru Nanak are very extensive.

The Granth Sahib begins with the following: "There is but one God whose name is true—the Creator". It contains a code of high morals. Purity of life, obedience to Guru, mercy, charity, temperance, justice, straightforwardness, truthfulness, sacrifice, service, love and abstinence from animal food are among the virtues on which great emphasis is laid; while lust, anger, pride, hatred, egoism, greed, selfishness, cruelty, backbiting and falsehood are vehemently condemned.

[FONT=Trebuchet MS, Arial, Helvetica]The word 'Gurdwara' means Guru's home. It is the Sikh place of worship. Gurdwaras, or Sikh Temples, were built at important Sikh historical places in memory of events that had occurred there. It is not easy to name each and everyone. However, like all religions, Sikhism has some Gurdwaras that have more historical significance than others. Harmandir Sahib is the most famous and world known Gurdwara. [/FONT]

The Harimandir, now called the Golden Temple, is a living symbol of spiritual and historical traditions of the Sikhs. The tank and the temple have been a source of inspiration to the Sikh community ever since their foundation. It is evident from the Sikh chronicles that the Sikh Gurus had evolved traditions of founding new Sikh centres which were popularised among their followers as places of pilgrimage The foundation of Sri Harimandir Sahib is the most significant achievement of the Sikh Gurus as a centre of inspiration and action for the Sikhs. Soon after its foundation the temple became an unparalleled establishment as a place of pilgrimage. 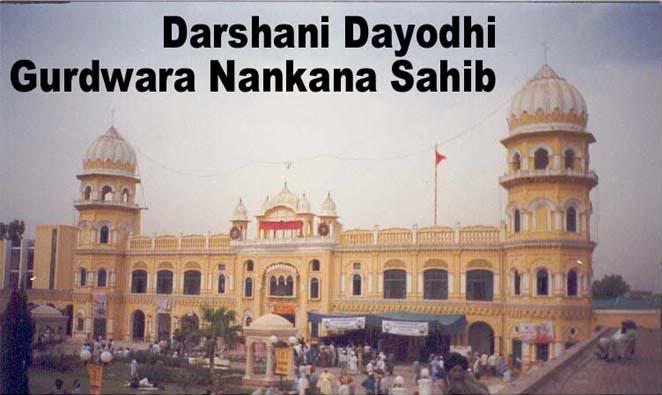 Nankana Sahib is a holy place where the founder of Sikh religion, the dispeller of darkness, the most enlightened global Guru, Guru Nanak Dev ji was born early in the morning to Mata Tripta Ji and Mehta Kalu Ji on 15th April, 1469 (Baisakh sudi 3, Samwat 1526).
Bhai Gurdas in his Var (Var 1/27) has equated this event with the sun that lights up the earth after a dark night :
Jeeu Kar suraj nikaleya, taare chhipe andher paloa. (Var 1/27)
According to Puratan Janam Sakhi, the trees starting dripping juice, many a pauper became rich, the diseased were blessed with health. The earth heaved a sigh of relief.
According to Janam Sakhis, when Daulta Dai, the maid nurse was offered money, she refused it on the plea that she had already been rewarded by the very glimpse of the holy baby. Guru Nanak gave his first message that he belong to God and would exert the people to worship His Name. Bhai Nand lal ji has well said that Guru Nanak was asked by the Almighty to turn the face of humanity towards Him.
The township of Nankana Sahib was earlier known as Raipur and later on as Rai-Bhoi-di-Talwandi but after the birth of Guru Nanak, it began to be known as Nankian Sahib/Nankana Sahib. It is situated at a distance 48 miles on the west from Lahore.
Guru Nanak dev ji passed his whole childhood and young age in Nankana Sahib.

The Gurdwara has tried to respect the building that they bought
Obviously the dome on top of the tower is new, but it still is very recognisably a church building. Inside there is wonderful wood panneling of which I try to show you the main features.

Looking to the back of the divan hall

The Guru on the Palki Sahib 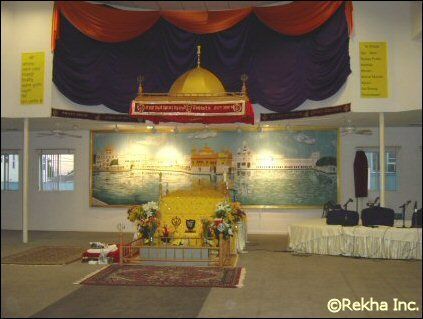 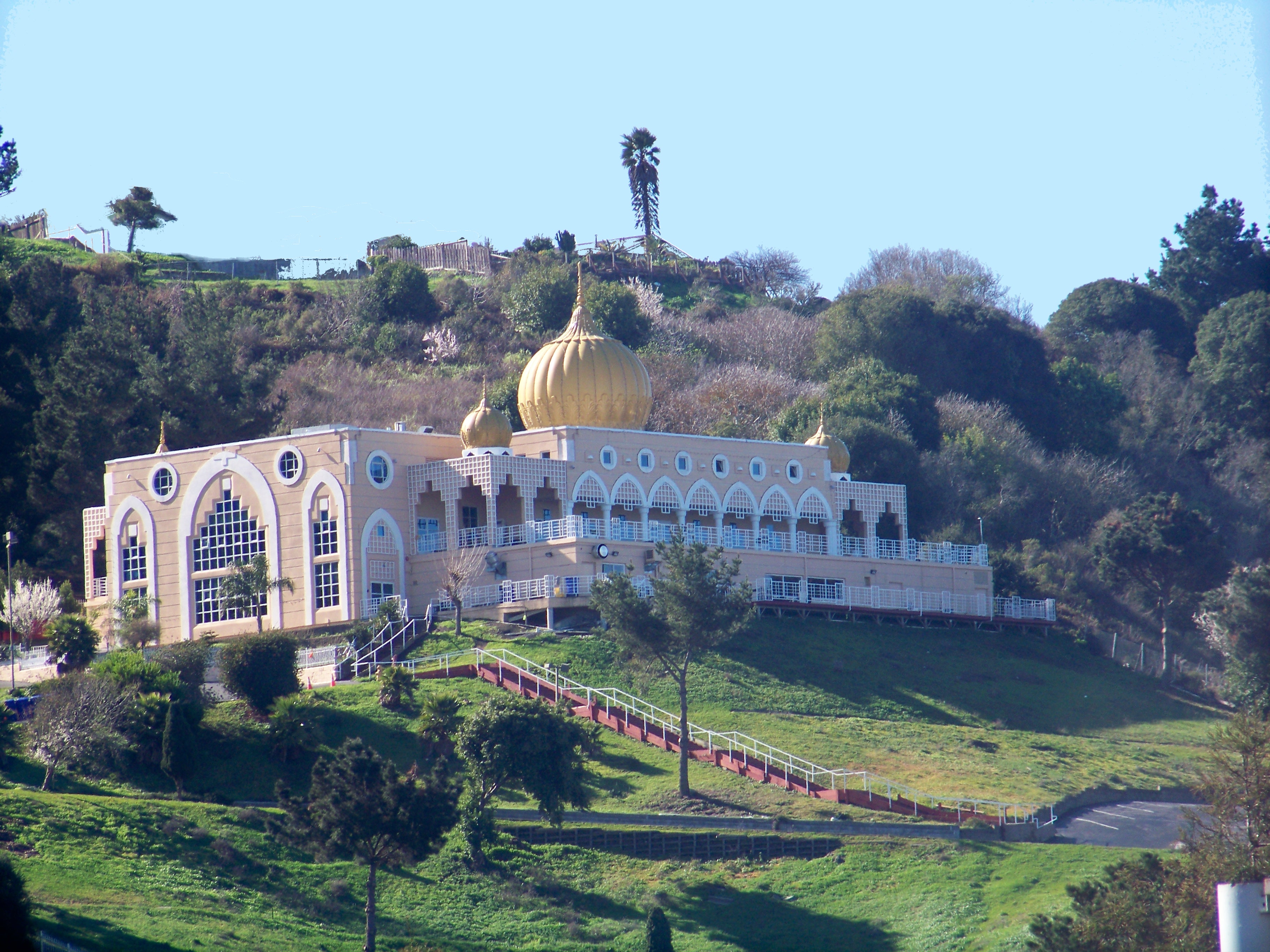 About twenty five miles north of San Francisco, El Sobrante Gurdwara Shaib is located at the hilltop of the El Sobrante Valley hills. It is serving the Sikh community in the Bay Area and given the name Sikh Center of San Francisco Bay Area. Gurdwara came into existence in late 1970s. Previously local Sikhs usually carried out the religious ceremonies in their homes; however, as more and more Sikhs immigrated to the Bay Area, Sikh community decided that a Sikh Temple was necessary to serve local Sikhs in terms of carrying out general ceremonies such as weddings and Akhand Path ceremonies, etc.
Situated at the hilltop, its architecture and uniqueness attracts many people to come and see the site. At the northeast wing of Second floor, a huge deck offers a breath taking view of the El Sobrante valley and San Pablo Bay.


Nanak settled down at Khartarpur towards the close of his life. His whole family lived there together for the first time. Houses for the dwelling of Nanak’s family and a Dharmashala were also built. Every day the ‘Japji’ and ‘Sohila’—the morning and the evening prayers composed by Guru Nanak—were recited in his presence. Guru Nanak died in the year 1538 A.D. at the age of sixty-nine.

HAPPY GURPURAB 2 all !!
You must log in or register to reply here.
Similar threads