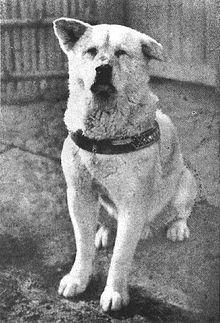 Hachikō ( November 10, 1923 – March 8, 1935), known in Japanese as chūken Hachikō ( "faithful dog Hachikō" ['hachi' meaning 'eight', a number referring to the dog's birth order in the litter, and 'kō', meaning prince or duke]), was an Akita dog born on a farm near the city of Ōdate, Akita Prefecture,[1] remembered for his remarkable loyalty to his owner, even many years after his owner's death.

In 1924, Hidesaburō Ueno, a professor in the agriculture department at the University of Tokyo, took in Hachikō, a golden brown Akita, as a pet. During his owner's life, Hachikō greeted him at the end of each day at the nearby Shibuya Station. The pair continued their daily routine until May 1925, when Professor Ueno did not return. The professor had suffered from a cerebral hemorrhage and died, never returning to the train station where Hachikō was waiting. Every day for the next nine years the dog waited at Shibuya station.
Hachikō attracted the attention of other commuters. Many of the people who frequented the Shibuya train station had seen Hachikō and Professor Ueno together each day. They brought Hachikō treats and food to nourish him during his wait. This continued for nine years with Hachikō appearing precisely when the train was due at the station.


Eventually, Hachiko’s popularity grew to the point that a bronze statue was carved in his honour. He was even present at the unveiling in April 1934. It was melted down to aid in the war effort during World War II. But even this couldn’t diminish his fame. After the war, people petitioned for–and were granted–a new statue in Hachiko’s honour.
Hachiko died in 1935. But even today, over 75 years later, it’s no surpise that people choose to meet by the statue of the dog who would always be waiting for his master. 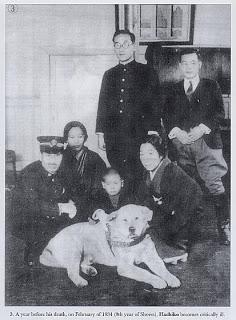 Hachiko with train station staff a year before he died
​
You must log in or register to reply here.
Similar threads
Real Life Facts
those are real tables with animals ’bathing’ inside of them
Real Talk
Real story of American Dollar v/s Indian Rupee
Your Real Name
Share:
Facebook Twitter Pinterest WhatsApp Link
Top