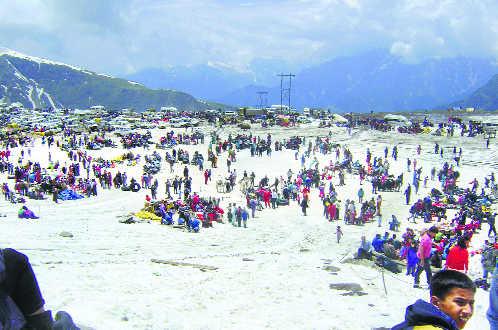 Maintaining its prohibitory orders on commercial activity at Rohtang Pass, the National Green Tribunal today refused to allow paragliding in the eco-sensitive area and warned that it would initiate penal action if pollution is caused in the area.
A bench headed by NGT chairperson Justice Swatanter Kumar directed the paragliding association to prepare a draft plan to carry out regulated and controlled sports activities in the area to ensure that no pollution in caused in the area.
“You (paragliding) are the most polluting one. You throw plastic, foil papers, water bottles and other waste, etc. and say you don’t pollute. We are not going to allow you like this. Show us the bona fide intent that you want to comply with our orders. Don’t think that by making a hue and cry you will get an order in your favour. We will impose a cost of Rs 1 lakh on you, if you will not ensure cleanliness.
“First, you prepare a draft plan with regard to your operation and go to secretary concerned and get it approved. Then, we will consider your submissions. Until, the state government (Himachal Pradesh) concurs with your plan, we will not say anything,” the bench said.
The observations came after the counsel appearing for paragliding association sought permission from the bench to operate the adventure sports activity on the ground that it does not cause any pollution.
The tribunal has imposed complete ban on commercial activities including para-gliding, snow scooters, horse riding, sledges and type-tube gaming at Rohtang Pass and its adjoining areas, including Solang Nullah.
During the proceedings, the counsel appearing for taxi association sought transparent allotment of permits to go to Rohtang Pass.
The NGT had earlier extended its stay on its order banning entry of all diesel and petrol tourist vehicles while limiting the number of vehicles entering the popular area to 1,000 per day.
It had directed each vehicle, permitted to Rohtang Pass, to pay environmental compensation at the rate of Rs 1000 for petrol vehicle and Rs 2500 for diesel vehicle.
The tribunal had also said that each vehicle which carries more than six passengers would be liable to pay compensation of Rs 5,000 as environmental compensation and these charges are payable for single entry.
You must log in or register to reply here.
Similar threads
Punjab News ਸਿੱਖਿਆ ਮੰਤਰੀ ਨੇ Green Diwali ਮਨਾਉਣ ਦਾ ਦਿੱਤਾ Message
Taxing times: Rs 200 green fee to enter Shimla
Renuka Dam: NGT sets up panel to study green aspects
Green tax a death warrant for Faridabad stone crusher zone
Green order: No new diesel vehicles in Delhi till Jan 6
Share:
Facebook Twitter Pinterest WhatsApp Link
Top