Gatka being popularized in rural Punjab

Gatka being popularized in rural Punjab 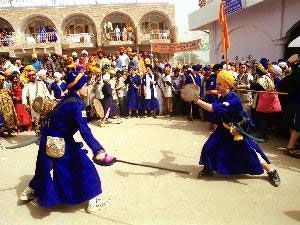 Narli (Amritsar) : Gatka, the Sikhs traditional martial art form, which is generally at public display usually during religious procession these days, is being popularized and revived in rural Punjab.

The endeavor to popularize the Punjab's old culture among students through Gatka is also meant to enable youth to stay fit n' fine and lead a disciplined life.

An encouraging number of teenagers and adolescents are getting drawn to this traditional martial art form to remain physically fit and lead a disciplined life.

About 50 children, belonging to about 30 villages including Khalra, Chhina Bidhi Chand and Mari Kamboke are learning the Gatka art here at this Narli Village near Bhikhiwind, which is described to be ancestral village of Shaheed Bhagat Singh.

It's an attempt to revive this traditional martial art, which was earlier used by Sikh armies and soldiers against the Mughals.

The responsibility to motivate and train all interested youngsters has been taken jointly by a non-governmental organisation Punarjot and Spring Dale Senior School.

The art form is not just a charm for youngsters belonging to the Sikh community but others as well.

Surindar Pal Singh Dhillon, Gatka teacher, said: "The motive is to awake people, otherwise, it might happen that the next generation will be totally unaware about the art of Gatka. It's a very good step to revive a dying art. Earlier, such efforts were limited to towns only. It's very heartening to see efforts to revive Gatka in border villages."

The Sixth Sikh Guru, Guru Hargobind propagated the theory of the warrior-saint, and emphasized the need for his followers to engage in self-defense martial practices.

In modern era, Gatka is rarely used in combat and has evolved into a sport.

The children practice various techniques daily for three - four hours. After a year of training they will be able to compete in regional and national level gatka competitions.

The training gives them confidence and a positive attitude.

Devinder Singh , another Gatka instructor, said: "The child should lead a disciplined life. And we also want them to become tough and strong. They have promised to work hard on this. After this, we will teach them the basic skills of Gatka like Chakri, Paintra stepping and different kinds of weapons like Maratti, which is essential to learn to handle other weapons. Then single Sotti, which we refer to as ek-tangi (one -legged) then double Maratti and then we teach them how to use shields and swords. We hold sword fights for students. We will train them to use all types of weapons."Suman Jutsi, one of the trainees, said: " It's a very nice sport that inspired me to learn it. It helps in maintaining physical fitness and teaches us discipline. It also imparts the feeling of cooperation among us."

It gives the practitioners complete control over body movements, the mind, and confidence in the self.