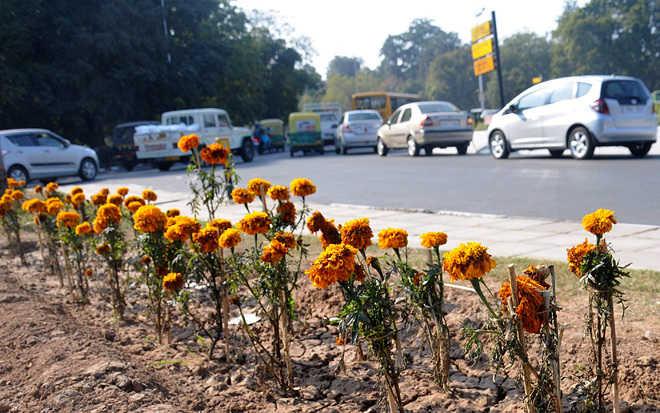 The cosmetic touch given by the UT Administration and the Municipal Corporation to the city for Prime Minister Narendra Modi and French President Francois Hollande’s visit has started fading now.
The horticulture wing of the UT Administration and the MC had prepared flowerbeds at various roundabouts, light points and along both sides of the dignitaries’ route to welcome them, but eight days later, most of these have started drying up.
The Administration had spent between Rs 1.5 lakh and Rs 2 lakh and had planted around 2,000 saplings of ornamental flowers.
These included the marigold, dahliya, salvia, dog flower, wall flower, calendula and dyanthus varieties. The Administration and the MC had purchased these varieties from nurseries in Chandigarh, Panchkula and Mohali. UT and MC workers are not watering these flowerbeds daily, due to which they have started drying up.
Sanitation takes a hit
Before the French President’s visit, the Administration and the MC were carrying out sanitation campaigns across the city, including colonies and villages, but now residents hardly see safai karamcharis cleaning roads, green belts and back lanes.
You must log in or register to reply here.
Similar threads
French woman who received first face transplant dies after ‘long illness’
In A First, French Soldiers Will March With Indian Soldiers On Republic Day
French Authorities Say Dozens Dead In Paris Attacks
Bihar deports 10 French nationals for 'Maoist' links
French Anti-P2P Outfit Leaked Users Data Online
Share:
Facebook Twitter Pinterest WhatsApp Link
Top