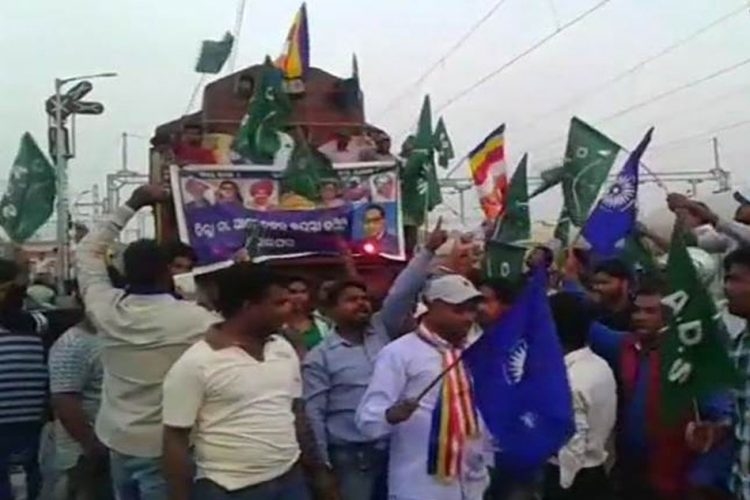 Several Dalit groups called for Bharat Bandh on April 2. Apart from schools and colleges remaining shut in Punjab, there are ongoing protests in many other states as well. It is reported that protests have turned violent in some places, resulting in the death of four in Madhya Pradesh and trains have also been blocked at several places.

The protest is against the Supreme Court’s March 20 ruling regarding the “dilution” of Scheduled Caste/ Scheduled Tribes (SC/ST) Atrocities Act.

Violent clashes, shutting down of schools and colleges amidst protests
Punjab government as a precautionary measure ordered schools and colleges to remain shut following the bandh called by various Dalit organisations. The state government has also asked the army and paramilitary forces to remain on standby, should matters get worse. All public and private transport would also remain off road.

The Supreme Court’s ruling has led to many violent clashes in various states.

Four persons have died in Morena and Gwalior, Madhya Pradesh. Curfew has been imposed in the areas like Morena, Gwalior, Sagar and other parts.

Dalits from Rajasthan and Uttar Pradesh have come out on the road to protest against the ruling. Many people including women have come down on the streets of Agra and Bharatpur to protest.

In Ahmedabad, Gujarat, men and women participated in large numbers in the protest and shouted slogans.


In Barmer, Rajasthan, the protests have taken an ugly turn as many vehicles were torched and various public properties were destroyed.

In Ranchi, Jharkhand, violent altercations were exchanged between the protesters and the police. It is being reported that few were injured in the scuffle, however, no casualties were reported.

Violent protests are being reported from areas like Morena in Madhya Pradesh, Jaipur and other areas.

Trains have been blocked in several areas. Different groups, including Communist Party of India (Marxist–Leninist) Liberation (CPI ML) activists blocked a train in Arrah, Bihar. Trains were blocked in other areas like Forbesganj junction railway station in Araria district and in Patiala, Punjab, among others.

Background
On March 20, the Supreme Court issued a directive saying that action against public servants accused of hostility towards SC/ST would be taken only with written permission from the appointing authorities. Also, the action against accused private citizens would be taken only if the concerned Senior Superintendent of police allows. Besides this, the bench of Justices AK Goel and UU Lalit also ruled that a preliminary inquiry should be conducted before the FIR is registered to check if the case falls under the parameters of the Atrocities Act or if it is frivolous or motivated.

Dalit groups across the country feel that the Supreme Court’s order, which bans automatic arrest and registration of cases for alleged harassment of SCs and STs, will dilute the Prevention of Atrocities Act, 1989 which aims to protect the marginalised.

The reported “dilution” of the law was done to curb “abuse of law”. The court judgement said, “Innocent citizens are termed accused, which is not intended by the legislature. The legislature never intended to use the Atrocities Act as an instrument to blackmail or to wreck personal vengeance.”

Congress President, Rahul Gandhi tweeted that the party “salutes” those protesting for their rights.