Food inflation rises to 16.9 per cent 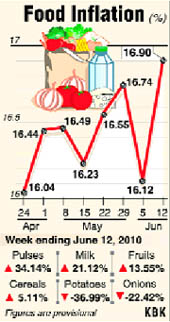 Annual food inflation rose to 16.90 per cent for the week ended June 12 on high prices of pulses, vegetables and milk. The annual rate of price rise of food items in the previous week was 16.12 per cent.

Prices of pulses for the week were higher by 34.14 per cent over the corresponding week last year, while that of milk rose by 21.12 per cent on an annual basis.

However, prices of potato and onion were down by 36.99 per cent and 22.42 per cent, respectively. On weekly basis, prices of vegetables rose by 8.06 per cent, that of condiments and spices by 3 per cent. Urad, moong and tea became expensive by 1 per cent each over the previous week.

However, mutton price was down 2 per cent, and sea fish and arhar was cheaper 1 per cent each over the week. High food inflation is primarily driving up the overall inflation, which was 10.16 per cent in May. — PTI
You must log in or register to reply here.
Share:
Facebook Twitter Pinterest WhatsApp Share Link
Top