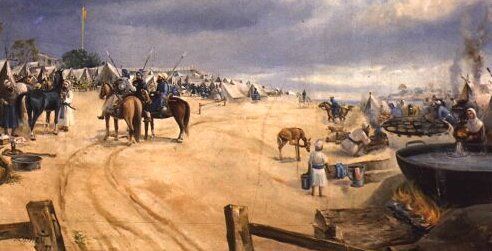 King Jahangir died on 8th November, 1627 A.D. His son Shah Jahan ascended the throne of India on the 6th February, 1628 A.D. (after battle with his brothers for throne). After becoming king he issued a proclamation, "preaching of any religion except Islam is banned. Temples constructed in the last few years be demolished and no new ones be constructed." In accordance with this proclamation, the step-well at Lahore was filled up and a mosque constructed at the site. This happening alerted the Sikhs to be prepared to defend Amritsar.

On the 15th May, 1628 A.D., when the Guru heard of the arrival of the royal army, he ordered his generals to take up positions. The marriage of Bibi Viro, the daughter of the Guru, had been fixed for the third day and the marriage party was coming to Amritsar. The guru sent the holy granth and the family to village Chabhal and sent a message to the bridal procession to reach there.

The Sikhs and the royal Army of Mughals clashed near Pipli Sahib. The braves from both sides began to show their skills. This was the first battle on Punjab's soil in which there was no involvement of wealth, land or worldly thing. The Sikhs had only come forward to fight the excesses of the rulers not caring for their lives for the sake of their freedom and honour. When the Guru reached Lohgarh fort, he ordered Sikhs to fire the stone-cannon. That cannon had been made by Mohri, a carpenter of Khemkaran, from a dried tree. When the army started to retreat due to the rain of stones from the fort., Mukhlis Khan challenged, "You are the sons of brave men and there is only a band of fakirs (ascetics) on the other side." Out of the shame, the royal family kept on fighting till dusk.

The next day, in the first attack, Painde Khan came out of the fort and made short work of Didar Ali, Mukhlis Khan's companion. The Guru after defending three blows from Mukhlis Khan's sword, inflicted such a blow on him with his double edged sword that pierced his shield and split him into two. Seeing the end of their leaders, the royal army fled. After the cremation of the Sikhs who attained martyrdom in the battle, the Guru took the Sikhs with him and reached Chabhal by the fall of night. ​
J

thanxxxxxxx for all that
You must log in or register to reply here.
Similar threads
Greatest battle of all time
Battle of Saragarhi "Lest We Forget"
The Battle of Muktsar
The battle of Bhangani.
world,s best war by sikhs
Share:
Facebook Twitter Pinterest WhatsApp Link
Top