Sikh dharma is the world’s first spiritual tradition to start the movement of gender equality 500 years ago. There have been many famous Sikh women throughout history up to the present day. This essay looks at some of the achievements of these brilliant women.

Mata Khivi was Guru Angad Dev's wife and she occupies a special place in Sikh history. She played a critical role in the second Guru's life. Her most important contribution is
that she made the concept of langar (community kitchen), a reality. She helped create a new social consciousness in Sikh women.

Mata Ajit Kaur was the wife of Guru Gobind Singh. She nurtured and guided the Khalsa for forty years after the Guru's death. She was deeply spiritual, as well as intellectual, and was responsible for making scholarship a central part of Sikh life. She helped provide leadership for the Sikhs in a very difficult and tumultuous time following the passing away of Guru Gobind Singh. She also helped to maintain the sanctity of the Guru Granth Sahib as the successor of Guru Gobind Singh and dealt strictly with pretenders and other aspirants of Guruship.

Mata Sahib Kaur The Spiritual Mother of the Khalsa. During the first Amrit ceremony of the Khalsa
on Vaisakhi 1699, She added sugar wafers(Patasae) in the preparation of the Holy nectar (Amrit) in order to infuse mercy and benevolence into the preexisting properties (courage and strength) of the Amrit. Sikh Women are vital to the foundation and the future of the Sikh way of life. On this auspicious occasion,let us be inspired by Mata Sahib Kaur’s courage and compassion and continue to stay involved in our communities.

Bibi Bhani has a unique position in Sikh history. She was the daughter of the third Guru (Guru Amar Das), wife of the fourth Guru (Guru Ram Das), and mother of the fifth Guru (Guru Arjan Dev). Bibi Bhani was an inspiration during the formative period of Sikh history and symbolizes responsibility, dedication, humility and fortitude.

Rani Desa of Nabha and Daya Kaur of Ambala were exceptional rulers of their kingdoms. Daya Kaur, wife of Gurbakhsh Singh, ruler of Ambala, succeeded to her husband after his death. In the words of Lepel Griffin, "She was an excellent ruler and her estate was one of the best managed in the protected territory. These ladies were well known for their administrative acumen, grasp of political situations, and dexterity in handling arms and organising defence.”

The Patiala Sikh Queens: From the Patiala house also many names like that of Rani Fato, wife of Baba Ala Singh, Rani Ranjinder Kaur, Rani Aus Kaur and Rani Sahib Kaur may be mentioned. In the words of Lepel Griffin. "Rani Rajinder (Kaur) was one of the most remarkable women of her age. she possessed all the virtues which men pretend are their own—courage perseverance and sagacity—without mixture of weakness which men attribute to women."'. Sahib Kaur was proclaimed as Prime Minister of Patiala at the age of 18. She managed the affairs, both in office and in the battle-field, wonderfully well.

Sikh Women in the Military

Sada Kaur is described as a first woman commander-in-chief and a leader of unprecedented qualities. She along with her son in law Ranjit Singh defeated Zaman Shah, son of Abdali near Amritsar and established the Khalsa Kingdom. She became a young widow when her husband
was killed in battle.

Rani Jind Kaur was married to Maharaja Ranjit Singh, mother of Maharaja Dalip Singh, first female freedom fighter in the struggle to drive out the British from India. She tried her best to stop British from annexing her kingdom.

Mai Bhago Fought side by side with Guru Gobind Singh and was the lone survivor of the battle in which the 40 liberated souls defeated the Mughals. She led and fought in many battles for Guru Gobind Singh, and also served as his bodyguard. She led a battalion of 40 men in the battle of Muktsar. Mai Bhago Kaur survived to remain a member of the Khalsa army.

Bibi Khem Kaur was a general of the Sikh forces that supported a revolt against British in 1849.

Bibi Sahib Kaur Phulkian was a Princess of Patiala. She led armies into many battles and was the only woman in the Indian subcontinent to win a battle over a British General. Bibi Rajinder Kaur was also a Princess of Patiala who displayed her chivalry in numerous battles.

1997 Dr Kalpana Chawla was the first Indian woman to go in Space. She had no interest in make-up, hairstyle or cooking like her contemporaries. When her elder sister got married,
she wore the same suit for three consecutive days saying " it did not matter at all." Her aunt, Amrit Kaur, is proud of her year-and-half rigorous training regime at NASA

Snatam Kaur Khalsa was a New Age Grammy Award Nominee for her Spiritual music and is a world renowned peace activist promoting harmony through music.

Gurmukh Kaur Khalsa is director of Golden Bridge in Los Angeles. She is the author of The Eight Human Talents; Bountiful, Beautiful, Blissful: A Spiritual Path to Pregnancy and Birthing; and three DVDs on Kundalini Yoga and pre- and postnatal yoga.

Siri Sikdar Sahiba Guru Amrit Kaur is the joint head of 3HO Healthy, Happy and Holy organisation which teaches shares Sikh spiritual technologies with people from all walks of life.

Conclusion
Sikh dharma has a rich history, both old and modern, of Sikh women who have shaped Sikh history, were presidents, rulers and were in the military.

thanks for the information bruv

Maneka Gandhi (née Anand; born 26 August 1956), born to a Sikh family and educated at
Lawrence School, Sanawar, and later at Lady Shriram College in New Delhi, is an Indian
politician, animal rights activist, environmentalist, former journalist and the widow of
influential Indian politician, Sanjay Gandhi. She has been a minister in four governments,
and has authored a number of books in the areas of etymology, law and animal welfare.

In 1978, Surya magazine editor Maneka Gandhi shocked the nation by publishing the
photos of Defence Minister Jagjivan Ram's son making love to a Delhi University student.
The nine self-timed photos, which Suresh Ram, 40, took as he copulated with Sushma Choudhry,
were snatched from his car and passed on among others, to journalists including Gandhi and
National Herald Editor Khushwant Singh.

Gandhi, however, felt that she could make a political killing for her mother-in-law, Indira Gandhi,
by publishing them. So, at the risk of running into obscenity and privacy laws, the photos were
put up for printing with orders to the staff to show all but the most objectionable parts.
"We had to use a lot of tape," Singh remembered.

As an environmentalist, Maneka Gandhi, brought to the mainstream the issue of animal rights in India.
She was appointed chairwoman of the Committee for the Purpose of Control and Supervision of
Experiments on Animals (CPCSEA) in 1995. Under her direction, unannounced inspections of
laboratories where animals are used for scientific research were conducted, and abominable
conditions and cruelty were documented and exposed. The CPCSEA imposed restrictions that
brought some of the abuse to a stop. She started the organisation People for Animals in 1992
and it is the largest organisation for animal rights/welfare in India. She is a vegan and has
advocated this lifestyle on ethical and health grounds. She also anchored a weekly Television
program named "Heads and Tails" highlighting sufferings meted out to animals due to their
commercial exploitation. She has also authored a book under the same title. Her other books
were about Indian people names.

She runs an NGO, People For Animals, which has its shelters across India. 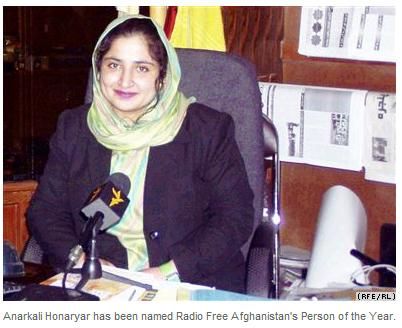 RFE/RL's Radio Free Afghanistan (RFA) has announced that it has selected 25-year-old human rights activist Anarkali Kaur Honaryar as its Person of the Year.

Honaryar works for the country's Independent Human Rights Commission and is a member of Afghanistan's small Sikh community.

She told RFA that she is proud of the honor, which she dedicates "to all those young people who fight for human rights, equality, and civil society."

Honaryar has been working to promote democracy, equal rights, and civil society issues in Afghanistan for the last seven years.

She was a member of the Afghan Constitution Committee, which drafted the country's current constitution, and of the Loya Jirga that selected Afghanistan's interim government after the Taliban was ousted.

"As a woman, I have faced so many challenges during this campaign,” she said. But she said she has never thought of giving up, despite Afghanistan's male-dominated culture.

When she was a child, Honaryar admits to once having wished she were a boy, as she dreamed of becoming a pilot. But because she was a girl living in Afghanistan's conservative society, the “dream never came true."

Instead, Honaryar is now a medical doctor.

"Now I believe that a woman is capable of doing anything that a man can do," she says, "only if they are given the opportunities that a man has.”

eh te bara nice hega thread thx sab da
You must log in or register to reply here.
Similar threads
Sant jarnail singh ji khalsa bhindranwale – famous quotes
Famous Couplets of Yogi Sahib part1
Sikh community may have to evolve and adapt
What is it like to have uncut hair for a Sikh?
So the next Sikh master will be chosen by the Mughals?
Share:
Facebook Twitter Pinterest WhatsApp Link
Top