When it comes to News Feed, bigger is not better with the social network's members, sources say. 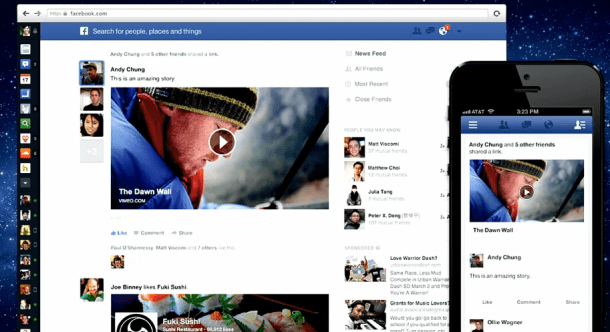 This version of News Feed, unveiled in early March, is one you'll likely never get.

Facebook's new News Feed, unveiled with pomp and circumstance back in March, isn't headed your way anytime soon, or even at all, according to a new report from AllThingsD.

The now reportedly tabled News Feed design is defined by its larger presentation of content. Updates, photos, and even ads, are so big they're impossible to miss. The 9-month-old refresh, still only available to a small percentage of people, also comes with a collection of filtered feed options for viewing content like most recent updates, music posts, or just photos.

But apparently bigger is not better with Facebook users. Unnamed sources told Mike Isaac at AllThingsD that engagement with the new design has fizzled, which means that a majority of users won't get the version we saw unveiled at the beginning of the year.

That Facebook has been taking a snail-speed approach to releasing its reworked News Feed is no secret, especially given that nine months later just a small fraction of the social network's 1.2 billion users have it. The company warned CNET in late March that it was going to "observe" and "iterate" before rolling out the no-longer-new design to the entire network. Perhaps they didn't like what they observed.

Officially, a Facebook spokesperson had only this say: "We're still testing the new design and taking feedback, and have nothing more to share at this point."​