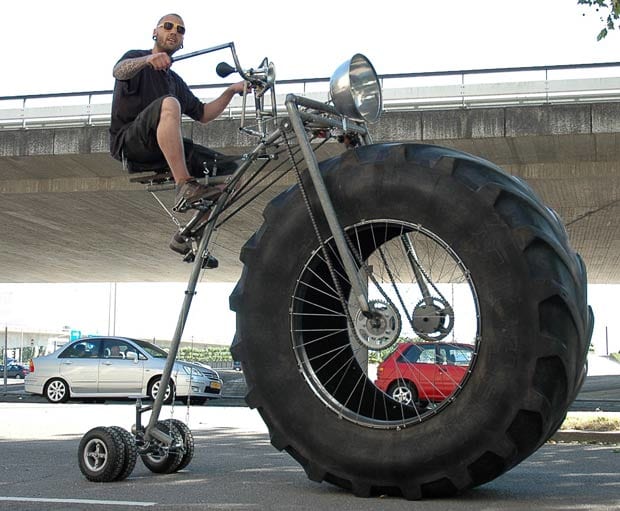 This monster bike took three months to build and is made from steel tubes, bicycle parts and a tractor tyre. It is the brainchild of Wouter van den Bosch, a Dutch art student and former mechanical engineer, who made the 450kg colossus from parts donated to him from friends and a tractor company 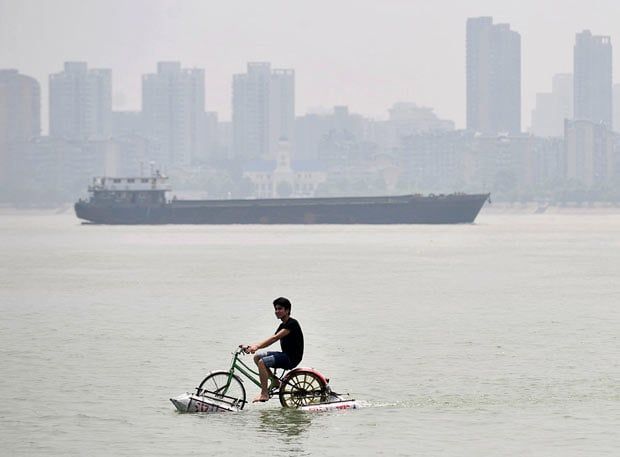 Lei Zhiqian rides a modified bicycle across the Hanjiang River, a tributary of the Yangtze River, in Wuhan, Hubei province, China. The bicycle, equipped with eight empty water containers, was modified by Lei's instructor Li Weiguo, who hopes to put his invention onto the market. 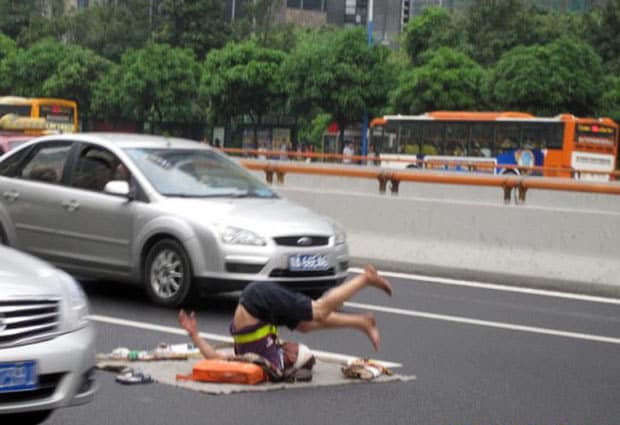 A man practises yoga in middle of a busy road in Guangdong province, China. 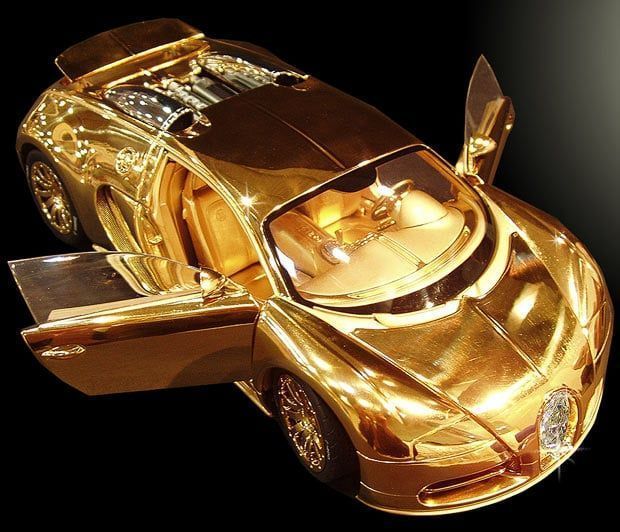 This is the world's most expensive model car. The Bugatti Veyron Diamond Ltd is on sale for two million pounds - twice as much as the real thing. Liverpool-based designer Stuart Hughes took two months to create the intricate 1:18 scale model in partnership with Swiss luxury model car maker Robert Gulpen. Weighing in at 7kg, it has been created with platinum, solid 24ct gold, and a 7.2ct single cut flawless diamond on its front grill. The 10 inch car also boats functional steering and a highly detailed engine. In a limited edition of three, owners also get a certification of authenticity, an aluminium case and photo documentation of the manufacturing process. 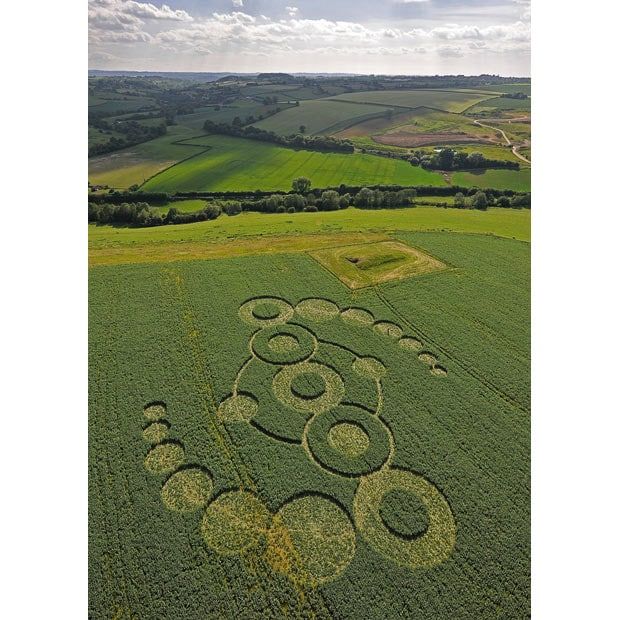 A 200-foot crop circle has appeared in a field of broad beans near the ancient Stoney Littleton Longbarrow near the village of Wellow in Somerset. 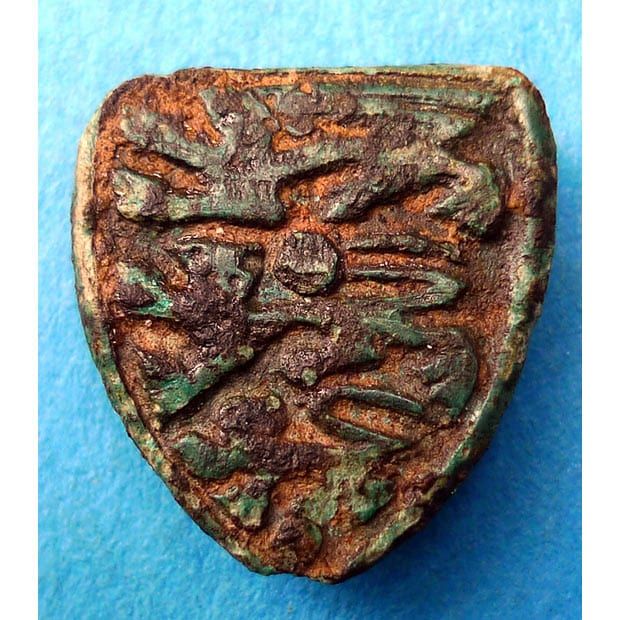 A photo issued by Warwickshire County Council of a medieval copper badge emblazoned with three lions found lodged in a stone wall in Parkside, Coventry, which is thought to date back to the 13th century but clearly shows the Coat of Arms of England. Caroline Rann, a member of Warwickshire County Council's archaeology projects group, found the emblem - believed to be part of a horse harness - ahead of a building project. The archaeologist hopes it will be a lucky omen for England's World Cup campaign. 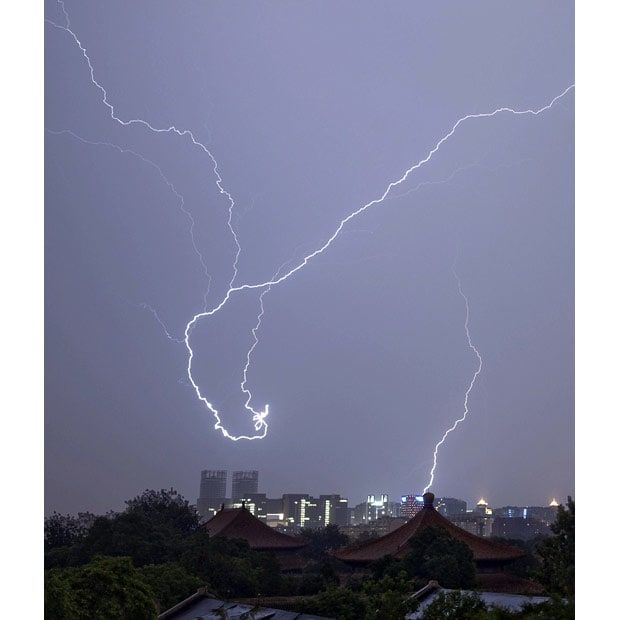 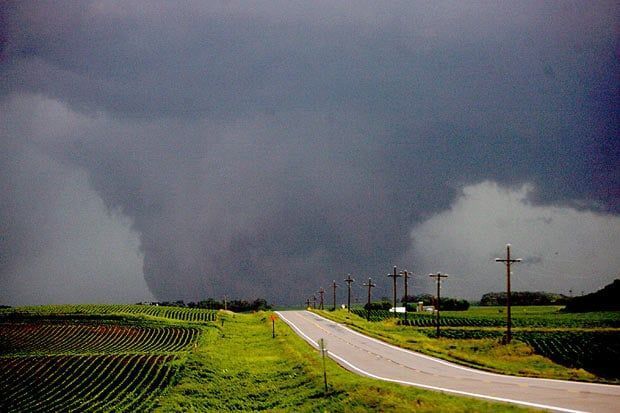 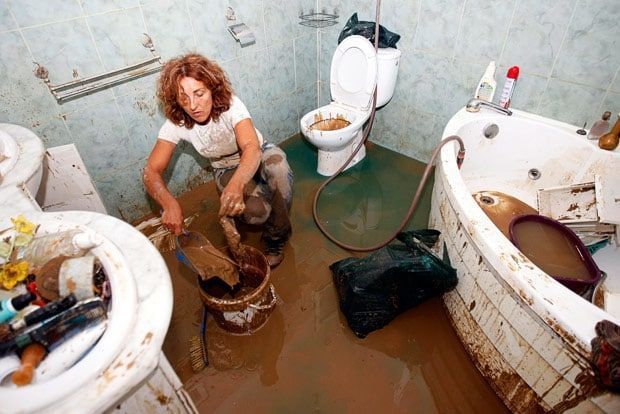 A resident scoops up mud inside her flooded house in Draguignan, south eastern France, a day after rising water from unusually heavy rains that hit the region caused a river to overflow. 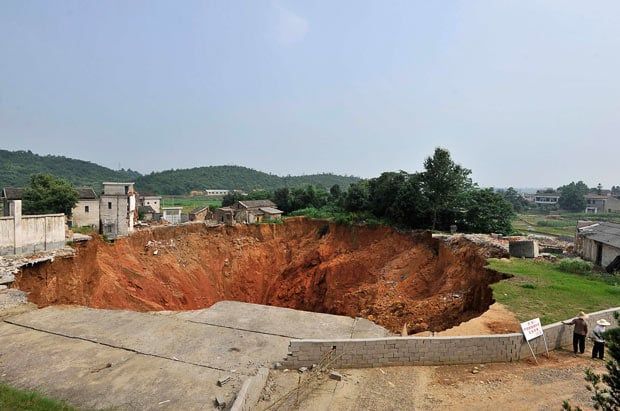 Local residents look at a sinkhole near Qingquan primary school in Dachegnqiao town, Ningxiang, Hunan province, China. The hole, 150 metres (492 feet) wide and 50 metres (164 feet) deep, has been growing since it first appeared in January and has destroyed 20 houses so far. 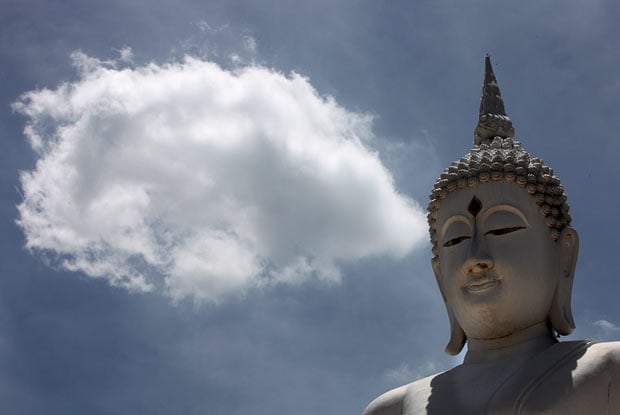 A giant Buddha statue is seen in front of a cloud, appearing to be deep in thought, at Thailand's biggest water reservoir, the Pasak Cholasit Dam in Lopburi province. The dam is only nine per cent full due to drought. Water resources in Thailand are at their lowest water levels in nearly two decades. 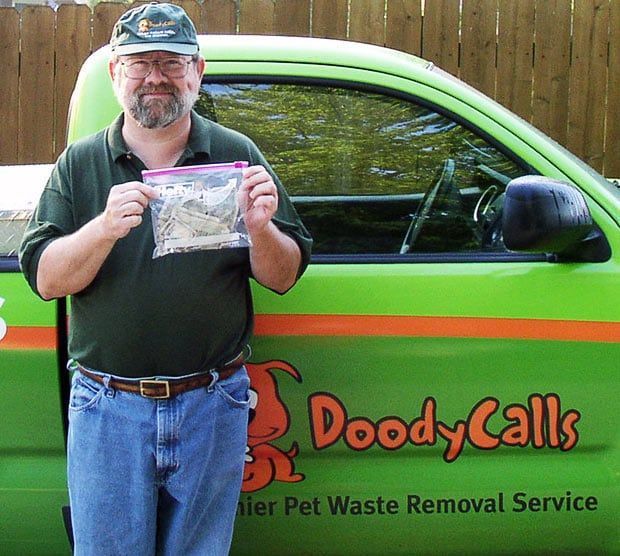 Doody calls: Steve Wilson, a worker with DoodyCalls Pet Waste Removal holds a plastic bag of money in St. Louis, USA. On a recent call, he noticed money sticking out from doggie doo and after cleaning the bills, placed them in a plastic zip-locked bag and returned what turned out to be $58 to the customer. The money was torn, but the serial numbers were identifiable, which means the bills could be returned to a bank and replaced with new money. 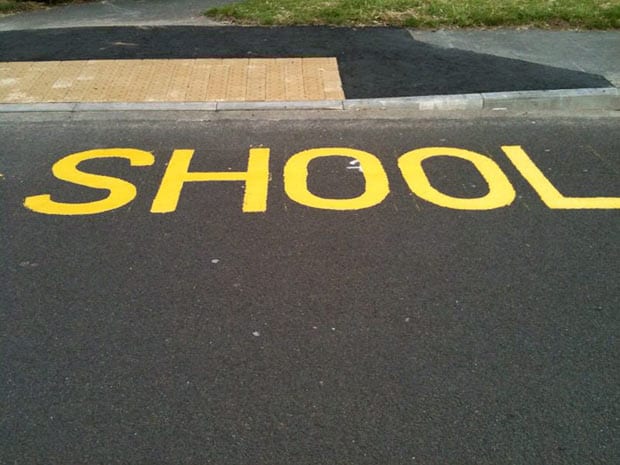 These council workmen could do with a spelling lesson - after painting the word 'SHOOL' on the road outside a primary school. Contractors omitted the 'C' outside the gates of Our Lady of the Rosary Catholic Primary School in Lawrence Weston, Bristol. 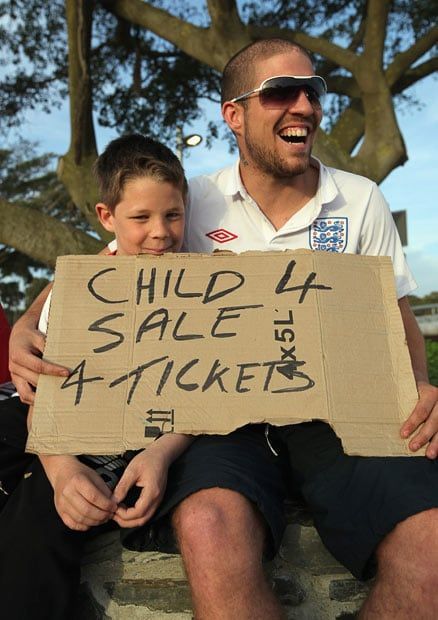 A family attempts to get tickets for the match between England and Algeria outside the Green Point Stadium in Cape Town, South Africa. 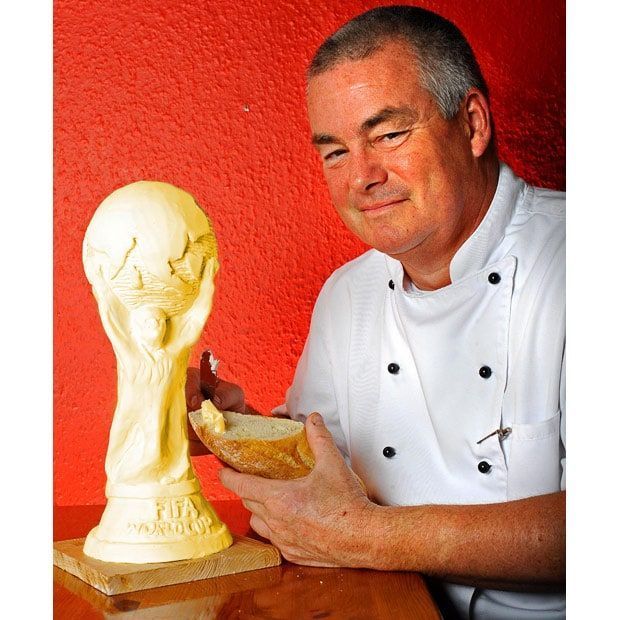 An England fan has come up with a tasty alternative to the World Cup, by carving this 15in replica of the trophy out of butter. Chef and sculptor Simon Smith spent 20 hours painstakingly creating this lifesize copy using just a Stanley knife and nine pounds of butter over a chicken wire and florists' oasis frame. 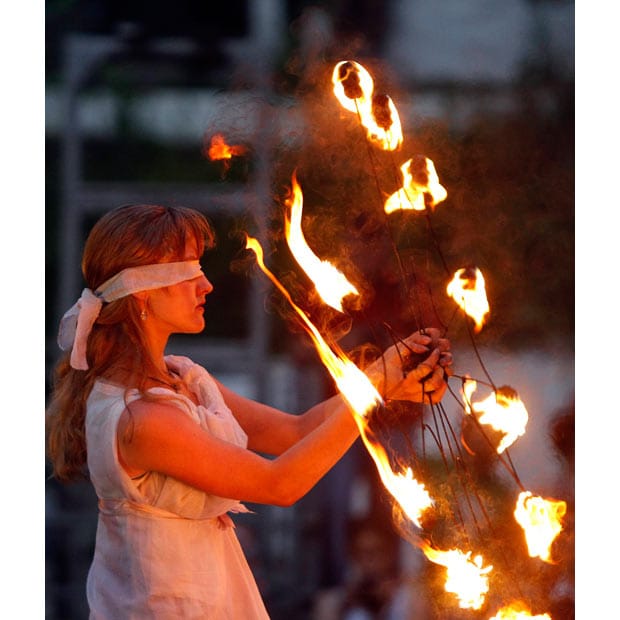 An artist performs during an annual fire festival in the Ukrainian capital Kiev. 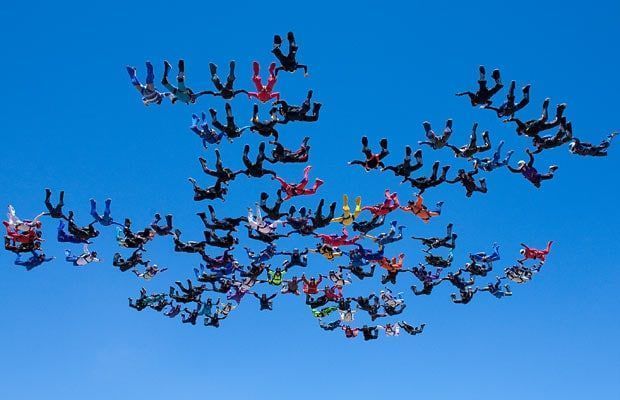 Some 112 Australian skydivers break their national record for the most number of freefallers in a formation, in Perris Valley, California. 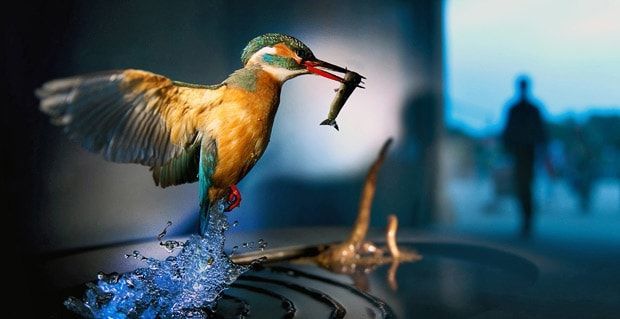 A kingfisher with a fish in it's bill is part of the exhibition 'Moments of Wilderness' at Moritzburg Castle in Moritzburg, Germany. The exhibition runs from 19 June to 15 October and visitors can view 40 mounted animals from all over the world by taxidermist Peter Morass from Innsbruck, Austria.​
You must log in or register to reply here.
Similar threads
White Sensation - World's Leading Dance Event.
Celebrities at Obama's Ball Event
Share:
Facebook Twitter Pinterest WhatsApp Link
Top