Erbazzone (also known as "Scarpazzone") is a savoury pie filled with a rich and extremely tasty spinach and Swiss chard greens mixture.
Erbazzone is a northern Italian speciality and is sold in most coffee bars, bakers as well as being part of your hotel breakfast buffet.
Erbazzone is a year-round savoury snack.

Clean, wash and boil spinach in a few spoons of water. Salt them and when ready strain, squeeze and mince coarsely.
In the meantime melt 80gr of lard in a pan with parsley and garlic and allow it to brown. Remove from the flame and add grated parmesan cheese.
Allow it to rest for a while then spread the dough with a rolling pin into a thin layer. Make 2 disks out of it, one bigger than the other.
Butter a cake tin and cover both the bottom and the edges with the bigger disk. Pour the spinach compound spreading well the filling and cover with the other disk. . Seal the edges of the 2 disks with the prongs of a fork. Bake in a preheated oven at 200°C for 45 minutes. 10 minutes before remove the erbazzone from the oven, spread some melted lard and minced garlic on the surface and bake again. 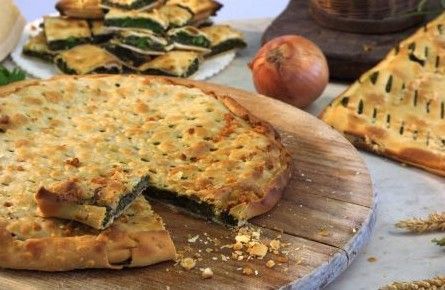