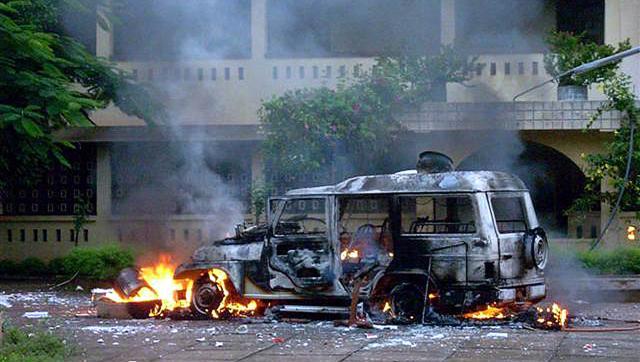 It is eight years since communal violence swept the second poorest, deeply-forested district of Odisha, Kandhamal. We must not allow the erasure of this hate violence from public memory, because the suffering and displacement of the tribal and Dalit Christians targeted by the communal violence are unabated even today, and justice is systematically denied.
The violence in 2008 was produced by a long hate campaign by Hindutva activists dating back to the 1960s, with periodic attacks on Christian places of worship, priests and nuns. The number of persons killed in 2008 was less than 100, but the looting and arson of properties and shrines was extensive, as was sexual violence. Six hundred villages of Christian converts were attacked and 5,600 houses ransacked and set aflame. Approximately 54,000 people were rendered homeless, and 295 churches and chapels destroyed. Thirteen schools, colleges and institutions for the sick were burned.

I was part of a fact-finding tribunal led by Justice AP Shah that had heard terrifying testimonies of survivors. Kanaka Nayak recalled that when her husband refused to reconvert to Hinduism, a mob spat on him and started to sing and dance around him; they paraded him, and dragged him. They told him “you sing your songs and let Jesus come and save you”. And they started attacking and cut his body into three pieces. Many attacks were on women. An orphanage was destroyed. The body of the warden was burnt, the lower part of her body was burnt so as to destroy all evidence of alleged gang-rape. Women who suffered sexual violence in both massacres continue to live with the agony of memory and silences of shame. One victim told us, “The attackers removed their mask before they raped me. Earlier, they would respect me.”
The National Campaign on Dalit Human Rights observed at that time: “The local government by and large not only stood by and silently watched, as the horrendous events were unfolding, but in several ways, according to the eye-witnesses, facilitated the gangs indulging destruction of human life and property”.

It is estimated that approximately 2,000 Christians were forced to abandon their faith in the carnage. VHP leader Pravin Tagodia enjoyed free passage across the state as he instigated violence, declaring “There is no place for Christians. If Christians don’t become Hindus, they have to go. We don’t care where they go. They must leave Orissa”.
Our tribunal noted that thousands of Christians were chased and herded in groups into temples and forced to undergo “reconversion” ceremonies with their heads tonsured. They were made to drink cow-dung water as a mark of “purification” and some of them forced to burn bibles or damage churches to prove that they had forsaken the Christian faith. The “reconverted” Christians were forced to sign “voluntary declarations” stating that they were becoming Hindus voluntarily — a condition required by the anti-conversion law.

People who were driven out of their villages were unable to return even long after the violence abated unless they agreed to “reconversion” (even though many were animists and were never of Hindu faith).
In the Centre for Equity Studies, we have studied several episodes of communal violence and found a common feature: The systematic and deliberate subversion of justice. Kandhamal adheres to this pattern. People reported that they were turned away and intimidated by the police when attempting to register complaints. They still succeeded in registering 3,300 complaints but only 820 first information reports (FIRs) were registered. Of these, 302 were closed claiming lack of evidence. Of the remaining taken to trial, only 247 have been disposed of so far.
Many witnesses were intimidated into not pursuing their cases, or rescinding on their evidence against the accused in court. Sometimes the VHP and Bajrang Dal activists were able to access FIRs, and they threatened (even abducted) witnesses, prompting some to change their statements in court. In some cases, the police aided the accused by registering false cases against the victim-survivors.

Still many bravely pursue legal justice against all odds. A nun who was gang-raped said: “I still go to court as a witness because there are many who are afraid to go to court as witnesses. Someone has to do it”.
“I want to move on with my life but find it difficult to break away and the past always haunts me because I am tied down to these cases for so many years now…The criminal system lingers and lingers and often justice is not served even after so much of hard work is put into these cases. I cannot go freely to Kandhamal. The perpetrators of these crimes are still out there.”

But despite her courageous and protracted battle, “the remaining 21 accused are yet to be brought to justice. On that day, my colleague Father (name withheld) and I were attacked by a mob of about 30. Nine men were charged with rape, however, only three were found guilty. The remaining six were acquitted.”
Because of the profound failures of justice, there is no possibility for the wounds of the hate violence to heal. As activist and senior journalist John Dayal observes sadly of the lives of the survivors of the carnage: “Fear is still a reality”.
You must log in or register to reply here.
Share:
Facebook Twitter Pinterest WhatsApp Share Link
Top