Staff member
The tall claims made by Uttarakhand Power Corporation Limited (UPCL) officials that no scheduled power cut would be imposed in any part of the state have been proved wrong as several colonies of Dehradun continue to face erratic power supply.
However, UPCL officials said the power cuts were imposed due to maintenance work lined up under different sub-stations of the city.
As per the roster prepared by the UPCL, re-conducting of 11KV Race Course, and 11 KV Bindal feeders will be done from September 22 to 26 in order to overcome the problem of overloading and low voltage in parts of the city.
The power cut would be implemented for nearly six hours, starting from 10 am in Race Course, Faltu Lines, Subhash Road, New road, MKP road, Gurudwara road, Madrassi Colony, Indira Colony, Tilak road, Khurbura and Chakrata road.
Speaking to The Tribune, Jagmohan Mehandiratta said the state power department should notify about scheduled and unscheduled power cuts in order to avoid inconvenience to residents.
Sharing the same feelings, Saket Ahuja, a resident of EC Road said businessmen often complaint about erratic power supply but officials concerned pay no heed to their grievances.
Expressing her views, Shallu Arora, a housewife, resident of Karanpur has said that it had become extremely difficult to bear hot and humid weather in the absence of electricity. She expressed her anguish stating that studies of children were also badly affected due to erratic power supply.
UPCL spokesperson Madhusudan said the department had procured electricity to bridge the gap between demand and supply in the state. He completely rules out that UPCL implements unnecessarily power cuts in any part of the state. 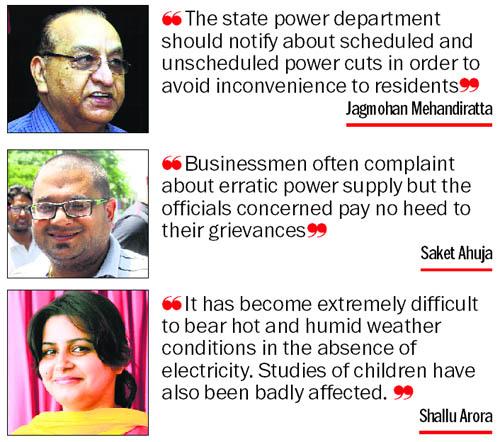