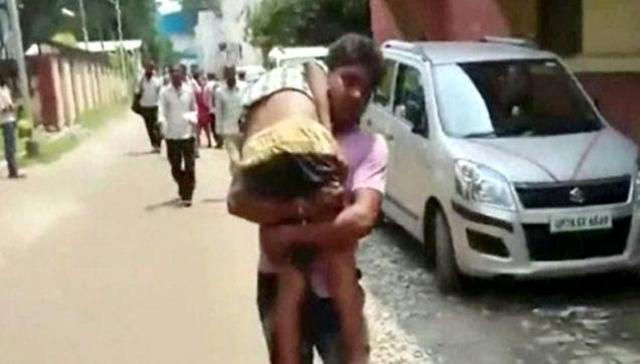 A father lost his ailing son on his shoulder after he was allegedly turned down at the government-run Lala Lajpat Rai Hospital in this Uttar Pradesh industrial city on Monday.
The hospital’s emergency section refused to admit Sunil Kumar’s 12-year-old son, Ansh, neither did the staff provide the father any assistance to carry the boy to a children’s medical centre where he was suggested to go.
The boy died on his father’s shoulder when he was dashing on foot to the children’s hospital, 250 metres away.
The principal of the LLR medical college and hospital, Navneet Kumar, was not available for comments.
Ansh was down with high fever since Sunday night. Kumar first went to neighbourhood doctors in Fazalgunj, but took his son to the city’s biggest hospital, LLR, as the fever increased gradually.
“I begged doctors at the emergency to examine my son and admit him. They took 30 minutes before telling me to take the kid to the children’s hospital,” he said.
Kumar asked for a stretcher to carry his son, but the request was turned down.
By the time he reached the children’s hospital, his son was dead. Doctors declared him dead on arrival.

Kumar again bundled his son’s body on his shoulder and walked home. No one helped.

The boy’s death underscores the state of healthcare in the country, the world’s third largest economy, where a single allopathic doctor serves a population of more than 11,000, according to the National Health Profile 2015 records.
The situation in the countryside is even more pathetic. In Odisha, a poor villager carried his dead wife for 10km last Tuesday after the Bhawanipatna district headquarters hospital, where she was admitted for tuberculosis and died, refused him an ambulance to carry the body home, 60km away.
Authorities woke up and launched a blame game after a video of Dana Majhi carrying his wife’s corpse went viral on social media.​
You must log in or register to reply here.
Share:
Facebook Twitter Pinterest WhatsApp Share Link
Top