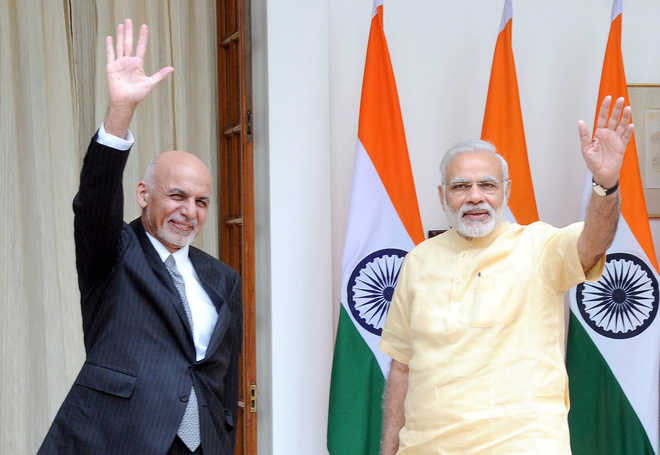 India and Afghanistan today jointly expressed their “grave concern at the continued use of terrorism and violence in the region for achieving political objectives”.
As India has been doing in the recent past in many of the joint statements, the mention of Pakistan was avoided but it was pretty evident that both countries were talking of the neighbouring state.
In a strongly worded message, both countries called upon all concerned to put an end to all “sponsorship, support, safe havens and sanctuaries” to terrorists aimed at India and Afghanistan. The joint messages of solidarity were stated at the end of delegation-level talks between visiting Afghan President Ashraf Ghani and PM Narendra Modi today. Both leaders said they looked forward to the resumption of India-US-Afghanistan consultations in New York later this month.
The growing co-operation, especially in the area of increased military assistance to Afghanistan from India, is likely to be a sore issue for Pakistan. While officially India stayed silent on the military assistance, it is widely understood that India will accede to the wish list presented by Ghani for more choppers and spare parts.
Later in the day, while delivering a lecture at a prominent think tank, Ghani, in an apparent reference to Pakistan, said that “in the absence of rules of the game”, and due to the willingness of some states to sponsor non-state actors, the phenomena (of terrorism) has evolved over the years with deepened and broadened techniques.
India also announced $1 billion for Afghanistan’s capacity and capability building in spheres such as education, health, agriculture, skill development, and empowerment of women, energy, and infrastructure and strengthening of democratic institutions.
You must log in or register to reply here.
Similar threads
Delhi, Kabul ink pact for visa-free travel of envoys
Punjab News ਮੰਗਾਂ ਨੂੰ ਲੈ ਕੇ ਕਿਸਾਨਾਂ ਨੇ Ludhiana Delhi Highway ਕੀਤਾ ਜਾਮ
Delhi 'ਚ Akali Dal ਦੀ ਇਕਾਈ ਭੰਗ
Punjab News Punjab ਤੋਂ ਬਾਅਦ Akali Dal ਨੂੰ Delhi ਤੋਂ ਮਿਲ ਰਹੇ ਝਟਕੇ
Punjab News ਅਸੀਂ Delhi ਦਾ ਕੋਈ ਫਰਮਾਨ ਨਹੀਂ ਸੁਣਦੇ – Bhagwant Mann
Share:
Facebook Twitter Pinterest WhatsApp Link
Top