Delhi Faces Worst Smog In 17 years; All You Need To Know About This Alarming Situation 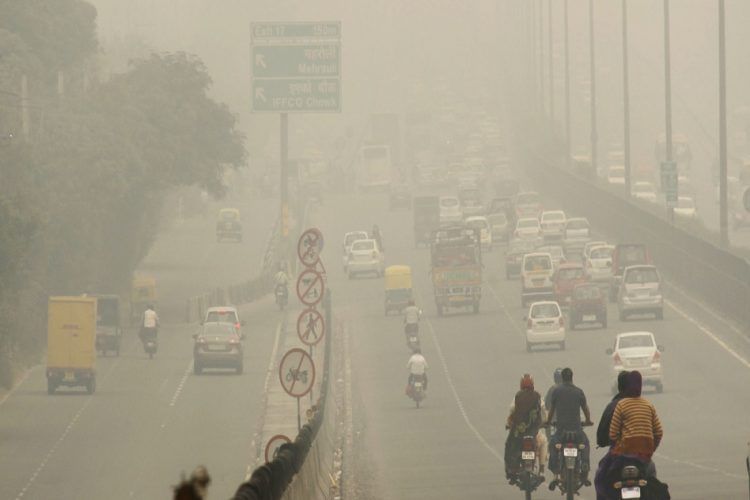 Delhi is slowly choking herself into a grave, risking the lives of 17 million people to several chronic diseases. On Wednesday, the capital witnessed the worst smog in 17 years with the pollution levels soaring to 62.7% higher than on Diwali night. This comes as a presage to what lies ahead during the winter that is on its way.

Visibility remained poor as a thick layer of haze blanketed the city, forcing severals schools to shut down. No measures have been taken so far to bring the present situation under control.

The international norm is that an alert is issued when the Air Quality Index (AQI) is more than 300 for two consecutive days. In Delhi, the AQI has been more than 300 micrograms per cubic meter of air for four days of this week. It crossed 1,500 at some locations, covered by haze on Wednesday night.

Smog is a mixture of air pollutants—nitrogen oxides and volatile organic compounds. Smog is a kind of air pollution, originally named for the mixture of smoke and fog in the air. It is a problem in a number of cities and continues to harm human health.

What can smog lead to?

Smog can cause or aggravate health problems such as asthma, emphysema, chronic bronchitis and other respiratory problems as well as eye irritation and reduced resistance to colds and lung infections. Children bear the highest risks from exposure to smog. They are more prone to respiratory ailments than adults.

Smog also inhibits plant growth and can cause widespread damage to crops and forests.

What have been cited as reasons for the Delhi smog?

Enough scientific proof has been cited that shows air pollution in Delhi has aggravated due to the increase in the number of vehicles plying on the roads. The number of vehicles has tripled in the last five years to 8.9 million, and this is one of the biggest contributors to toxicity in Delhi’s air. In 1975, vehicular air pollution was just at 2.35%, and in next 40 years, it rose to about 60%.

Burning of crackers during Diwali has however overtaken vehicular pollution. Not only Delhi, but the entire country’s pollution level was alarmingly high during the Diwali weekend. This is certainly because of a combination of adverse factors like slow wind speed and moisture in the air, a major hindrance in the dispersion of suspended pollutants.

However, a recent image by NASA has revealed that more than vehicular pollution and Diwali celebration, burning of crop stubble is considerably impacting the pollution levels. Farmers in neighbouring Punjab and Haryana have been setting fire to paddy stubble in their fields after cultivating the crop as part of the slash and burn process. As per The New York Times report, farmers are burning around 32 million tons of leftover straw.

Smoke from the crop fires blowing across the northern plains into New Delhi accounts for about one-quarter of the most dangerous air pollution levels in the winter months. 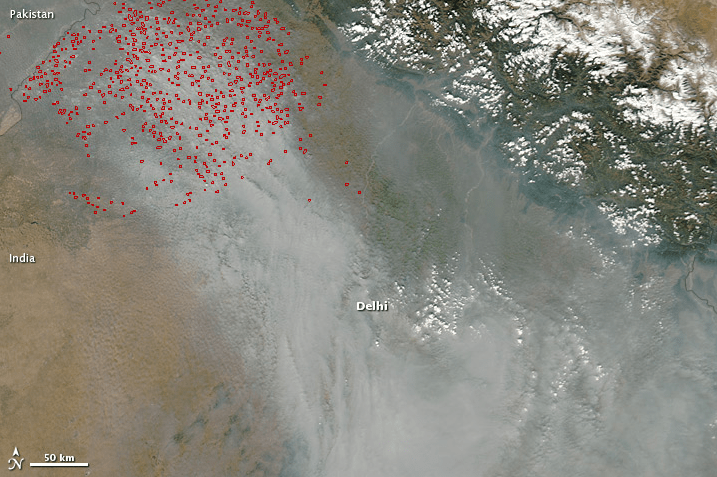 The suggestion by the government

Instead of implementing severe measures, including declaring a “red alert” in the region, Delhi government, the Centre and the pollution control agencies are busy blaming each other.

Delhi deputy chief minister Manish Sisodia on Wednesday announced measures such as sprinkling of water on roads, opening air purification centres at five locations, and adding a mist fountain as pollution abatement measures. However, the environmental experts have termed these measures as tokenism.

“The Government had proposed a dedicated bus lane which is still awaiting the L-G’s nod. For crop burning, environment minister Imran Hussain wrote to the Centre in September, seeking its intervention,” Sisodia said in a press conference.

Centre to also hold an emergency meeting with Delhi and its neighbouring states over the problem of air pollution.

The first and obvious measure can be declaring “red alert” in the state and shutting down schools, construction activities and non-essential businesses for the time being. In most cities around the world, including Beijing, pollution levels as high as Delhi’s would have meant a red alert. Last year, Beijing had ordered 2,100 factories to suspend or reduce production as part of its “red alert” measures to deal with smog, as the city remained shrouded under a toxic haze.

Since the growing vehicular woe is a major concern in the capital, the government should try to bring a cap on registration of new vehicles along with completely banning vehicles that are more than 15 years old. The government should encourage people and provide them with a reliable public transport system to bring about an impactful alternative to personal vehicles to reduce road congestion.

To curb the burning of crop stubble the government is promoting a seeder that can be mounted on a tractor and used to plant wheat without the need to dispose of the straw left after the rice harvest. But due to the heavy pricing of the seeder, most of the farmers are not able to afford this even after the government is providing half the money to purchase it. Another solution to this grievous problem could be to create a market for the excess straw. So far, seven power plants that generate electricity from straw have been built in Punjab, and six more are on the drawing board. But together, all 13 would consume only 1.5 million of the 20 million tons of straw produced in Punjab every year. The National Green Tribunal had demanded the government to put a check on the burning of crops and penalise the families espousing such practice. Yet no concrete solution has been provided in this regard.

There has been a lot of hue and cry on the social media over the talks of banning fireworks during Diwali. People have raised eyebrows, debated, and argued for and against this issue. If we delve into the matter seriously, we can see quite clearly what is happening to the environment post Diwali celebrations. Celebrating that one particular day with excessive crackers and noise can be a heavy cost to the lives of our near and dear ones, particularly to the little members of our family. In 2014, residents of Sikkim took the initiative of reducing the pollution levels in their state and by 2016, they celebrated a noise-free and pollution-free Diwali. Other states should draw inspiration from Sikkim.

It is time to put aside our differences and come together, this includes the citizens and the Government, as one unit to save the environment for our health and future.
You must log in or register to reply here.
Similar threads
In Delhi, faces of ‘terrorist nation’ Pakistan to be set burned on Dussehra
Delhi civic by-polls: AAP wins 5 seats, Congress 4; BJP faces big loss
NDB approves loans for Mumbai metro, Delhi-Meerut RRTS
Punjab News ਮੰਗਾਂ ਨੂੰ ਲੈ ਕੇ ਕਿਸਾਨਾਂ ਨੇ Ludhiana Delhi Highway ਕੀਤਾ ਜਾਮ
Delhi 'ਚ Akali Dal ਦੀ ਇਕਾਈ ਭੰਗ
Share:
Facebook Twitter Pinterest WhatsApp Link
Top