A corporate blog post which was hurriedly removed from the Microsoft's Office Blog shows why sometimes, official blogs and social accounts can be a really bad idea.

While the original post has been removed, you can still read it in its annotated entirety online here.

In the post, Tim Carroll, a "senior product manager on the Office 365 team" decides to take a tongue-in-cheek look at the experience of using Google Apps, but ends up sounding clueless as he describes Google as sign language.

The first thing that Carroll needs to realise though, is that when you describe your offspring as Knucklehead Son throughout the post, then you need to start by talking about some of the really stupid things your kid has done. Otherwise you just end up sounding like a crotchety old man who is chewing tobacco and muttering dagnabbit.

Here's the original text, as shown on TechCrunch: 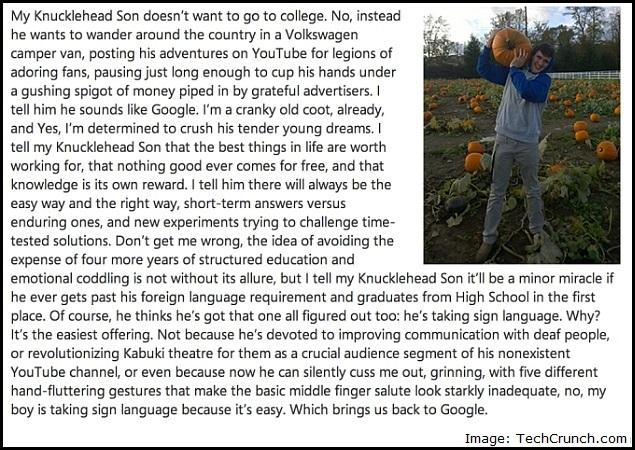 It's also pretty funny that he disparages his son for wanting to be like Google (in Carroll's words), one of the richest and most successful organisations in the world.

He also quickly swings around to his main thesis - that Google Apps is "mediocrity". But that doesn't mean that he has anything against Google! No, Google is pretty great in a lot of ways, Carroll concedes. It's just Google Apps that is a plastic hammer, he says. Because "Google Apps has file fidelity issues when you want to work on Office documents." This is starting to sound like a government PSA ad, complete with a condescending - "they are getting better" thrown in.

As the post continues, it's clear that Carroll is trying hard to balance trying to make a point about software, and also trying to stick with the original concept of a father patiently curing his "Knucklehead Son" of a stupid notion - Google Apps, in this case. That's why you've got the son talking about Volkswagens while Carroll talks about Google's plastic hammer - he can't get the two scripts to sync.

He even takes a dig at Free versus Freemium, which is particularly funny considering that the free versions of Office's apps have premium features which require an Office 365 subscription to use.

Somewhere along the way, Carroll clearly decided that he's run out of things to say about Office 365, which brings us to the funniest part of the blog post - after hundreds of words of bad analogies, the Knucklehead Son is clearly bored of listening to Carroll praise Office 365 instead of having an actual conversation, and he just says, "Yeah, maybe I should've stuck with Spanish."

The post is really funny to read, but the fact that it was taken down quickly means that the team at Microsoft clearly don't agree, and it's easy to see why.

While the post was made with the best intentions, in it, the Microsoft employee comes across as a clueless bore who has already decided what is best for you, and isn't interested in listening to your needs at all.

A company blog can often be a space for more informal communications, but it still ends up reflecting on the organisation, and therefore needs to be treated as carefully as any other official channel. These kind of mistakes look bad for the company, and taking it down doesn't really change anything, because it will be circulated through the Internet for a long time now.​
You must log in or register to reply here.
Similar threads
Retrieve Deleted Facebook Messages,Photos and Videos
Restore Deleted Windows 8 Fonts
Microsoft Teams News
Excel Tutorial 10 Hours Full Tutorial | Microsoft Excel Tutorial | Excel Training |
Microsoft Edge Chromium features and changes walkthrough
Share:
Facebook Twitter Pinterest WhatsApp Link
Top