How blessed is mother India who gave birth to so many great saints, sages, seekers and great philosophers ! The world had always been in need of such great souls and they have been taking birth here from the times immemorial. They awakened the common people, gave them wisdom, enlightened them, preached and thought about their well being, peace, morality and right conduct in life. From time to time people witnessed their miracles. Such great souls generated undaunted courage and patience in the people who were made to suffer by cruel aggressors and gave them strength to face the invaders bravely. As a result, the lamp of Indian culture and religion continues to spread its radiance till now. Shri Guru Ram Rai Ji Maharaj occupies a special place in the chain of great souls. His story dates back to 360 years. Shri Guru Ram Rai Ji was the eldest son of the seventh Patshahi (seventh Guru of the Sikhs), Shri Guru Har Rai Ji. He was born on Chaitrawadi Panchami, Tuesday, (the fifth day of Holi) in Samvat 1703, Vikrami (1646 A.D.) at Kiratpur, Kot Har Rai, district Hoshiarpur (now Ropar) in Punjab. His mother's name was Kot Kalyani who was also known as Sulakhni due to her ideal qualities. She was the daughter of Shri Maya Ram Ji belonging to a Kshatriya family of Anoop Shahar. Perceiving the influence and greatness of Shri Har Rai Ji, Shri Maya Ram Ji's younger brother, Shri Daya Ram Ji, married off his daughter, Krishna Kaur, to Shri Guru Har Rai Ji. Mata Kot Kalyani was very simple and generous by nature. She served the saints whole-heartedly and was also a great devotee of Lord Shiva. 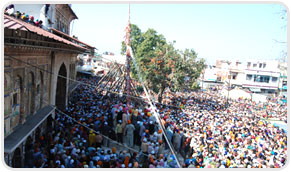 India is a land of fairs, festivals, feasts and festivities. These fairs and festivities are religious, cultural, national, commercial and educational etc. They are of many kinds. Most of the fairs are based on religion. On special festivals, people get together in thousands and lakhs and sometimes in crores, of their own sweet will without any invitation. There is no corner of our country which is devoid of annual fairs. One of the famous fairs of the Northern India is the Jhanda Fair of Dehradun. This fair begins on the fifth day of Chaitra (fifth day from the Holi), the birthday of Shri Guru Ram Rai Ji. Besides being the birthday of Guru Maharaj, it is also considered as the day of his arrival at Doon. In Samvat 1733(1676 AD) on that very day, the great occasion was celebrated in his honour and since then the Jhanda Ji is hoisted on that day every year to commemorate his sacred memory. 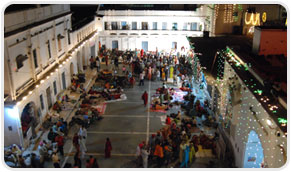 Large groups of devotees of Shri Guru Ram Rai Ji Maharaj come from the Punjab, UP, Haryana, Delhi and other states of india and also from abroad-some on foot-to Dehradun a few days before the raising of the Jhanda Ji. These crowds consist of men, women and children of all age groups and are called the Sangat. On Ekadashi, the Shri Mahant of Shri Guru Ram Rai Darbar Sahib goes to the banks of river Yamuna at Raianwala (Haryana) which is 45 kilometres away from Dehradun to invite and welcome the Sangat. The flag mast is also sent from the Darbar Sahib. The Sangat is brought to Dehradun with great love and regards and the arrangement for their boarding and lodging is done by the Darbar Sahib. Devotees arrive in groups of thousands and lakhs from various states. They do not come only from the Punjab but also from other districts of various states. Besides Dehradun, the followers of traditional Hinduism (Sanatan Dharm) also come from Saharanpur, Roorkee, Muzaffarnagar, Meerut, Bijnore, Moradabad, Bareilly etc. and from various places of Uttaranchal. In the year when the 'Kumbh' or the 'Ardh Kumbh' is held in Haridwar, the crowd in the fair swells and the number of hermits and saints also increases. Saints are also served with food by the Darbar Sahib. The Sadhus who sit near the lighted fire (Dhuni), are provided with firewood too. The arrangement for their stay is done at Laxman Park.

The head of Darbar Sahib, called Sajjada Nashin Shri Mahant leads a life of celibacy and dedicate his life for the noble cause of the society.

Rishi-munis, sages-saints, hermits-ascetics and great souls do not need introduction. Their personality and performance leave a permanent impression on the society by itself and people are drawn towards them through their magnetic attraction.

Most probably, this might have been the reason why our hermits and saints never said or wrote anything about themselves. Self-praise is not a quality of saints. It is not a virtue at all. They remained so busy in seeking the subtle truth and benevolence that they were not even conscious of their own importance. The contact of the common people with them was limited to get their blessings and have "darshan". People remained busy in earning their livelihood and as such, the dates of birth and death anniversaries of most of those great souls were forgotten. But the saying, "By their fruits ye shall know them," applies to them and cherishes such great persons. For want of any record of their dates of birth, education etc., the statements of the aged, their preachings, popular acceptances and assumptions can only be considered its basis. It is enough for the curious to know the history of their life and work. We remember those great souls by turning the pages of that history based on inferences.

Shri Guru Ram Rai Ji Maharaj left for his heavenly abode in 1687 and the work of the Darbar Sahib was then managed by Mata Punjab Kaur. In those days women were forbidden to occupy the seat (Gaddi) of a religious sect or a Mahant, hence she carried on the work with the help of an experienced assistant and devotee of the Darbar Sahib, Shri Aud Dass Ji, and the chief employee, Shri Har Prasad Ji. Shri Aud Dass Ji was declared as the first Shri Mahant. He had worked under the guidance of Shri Guru Ram Rai Ji and he had gained a lot of experience. 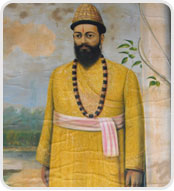 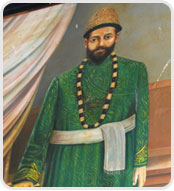 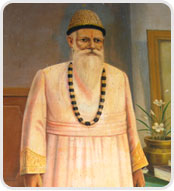 The Tenth
Shri Mahant Devendra Dass Ji
You must log in or register to reply here.
Similar threads