Chromebooks Can Now Run Linux in a Window via Crouton Exten. 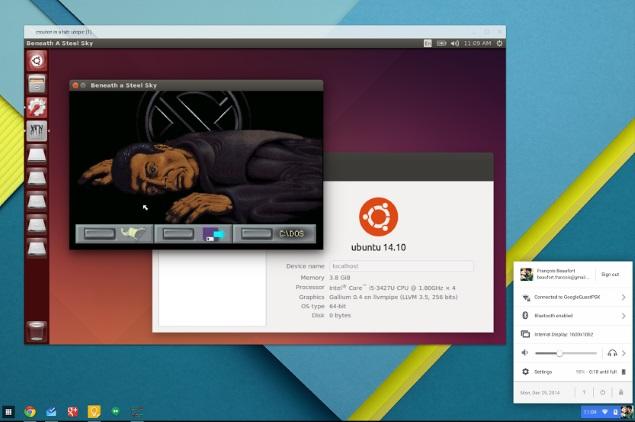 Chrome OS users can now run Linux in a window via an extension. The news comes as respite for users who earlier had to jump between virtual terminals to run Linux distributions on their Chromebooks and Chrome OS desktops.
Announcing the news, Google's Happiness Evangelist Francois Beaufort said in a Google+ post, "Google Intern has added support to run Crouton in a Chrome OS Window."

Users will have to set their device in developer mode to download Crouton Chrome extension, which will allow them to run Linux "without being forced to switch back and forth between the two operating systems", notes Gigaom.

The publication also pointed out that running Linux on a Chromebook is not a particularly new ability, as Chrome OS is based on the Linux kernel offering plenty, albeit complicated, of ways to run both operating systems.

Beaufort also detailed the steps to run Linux in a window on a Chrome OS machine.

In an attempt to woo potential customers, Google last month announced 1TB of storage free of cost for new Chromebook buyers. Google said the 1TB subscription, which would be valid for two years, was worth $240.

This year saw a number of OEMs launching Chromebooks with the last device coming from HP. The company, after launching its 11-inch and 14-inch Chromebooks during the IFA event in September, earlier this month revealed a new high-end version of the same 14-inch model with new features including a touchscreen and a higher price tag.​
You must log in or register to reply here.
Similar threads
This Is The Biggest Chromebook I've Seen
Samsung Chromebook Pro Review
Samsung Chromebook Pro & Plus hands on
HP Chromebook 11 G5 with 12.5 hours of battery life announced, starts at $189
HP Launches 14-Inch Chromebook With Full-HD Touchscreen
Share:
Facebook Twitter Pinterest WhatsApp Link
Top