Chikungunya and Dengue: What you must know about symptoms, diagnosis, treatment 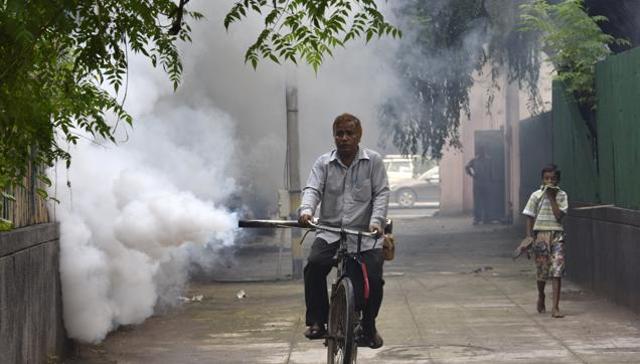 As the death toll from chikungunya mounts to 7 in the national capital, the Delhi government and the centre have been trading blame. More than 1,057 cases of chikungunya and 1,158 cases of dengue were reported in the national capital till September 10, the month when vector-borne diseases start to peak.
Here’s a guide to the two diseases, their symptoms and treatments:

It is a viral infection spread by the bite of the aedes aegypti mosquito. The last chikungunya outbreak in India was in 2006, when more than 1,500,000 cases were reported resulting in several deaths.

The word "chikungunya" means "to become contorted" in Kimakonde, a language spoken in parts of Tanzania and Mozambique, which refers to the contorted walk of infected persons who develop severe joint pain.

Symptoms appear between 4 and 7 days after being bitten by the infected mosquito.

The fever lasts for two to three days but the virus remains in the human body for up to a week. Mosquitoes biting a sick person during this period can spread disease to others around them.

Chikungunya rarely kills, and most deaths occur in older people with existing diseases.

Chikungunya can be detected using serological tests which will look for antibodies in your blood.

Unlike chikungunya, recovery from an infection will give life-long immunity.

The price of the confirmatory RT-PCR (Reverse Transcryptase–Polymerase Chain Reaction) test is capped at R 1,500 at public and private labs by Delhi government.

You need emergency hospital admission if :

You are over 60 years old with uncontrolled diabetes, hypertension, kidney problems, etc

Chikungunya has no cure, people are treated for pain and fever.

The symptoms start within five to six days after you’re bitten by an infected mosquito.
Fever lasts for seven to 10 days.

Symptoms include high fever (<103 degrees Fahrenheit), severe headache, pain behind the eyes, joint and muscle pain, nausea and vomiting, abdominal cramps, bleeding from the gums, nose or ears, and rash.

Most people recover in a week to 10 days by taking paracetamol for fever and pain and drinking lots of fluids to prevent dehydration.

If you suspect you have dengue, you need to get two tests done.

Confirmatory test: Get the NS1 Elisa-based antigen test done after three days of developing fever with symptoms of body ache, headache or nausea. The price is capped at R 650 by Delhi government.

Platelets count: Platelets help the blood clot and stop bleeding. Very low levels – the normal range is between 150,000 and 450,000 platelets per microlitre of blood – lead to internal bleeding and shock, which results in death from multi-organ failure. The cost is capped at R 50.

Less than 30,000 or if you’re bleeding: It’s a medical emergency, you need hospital admission.

Less than 10,000: Blood transfusion may be needed.

You need emergency hospital admission if you have:

Bleeding from the gums, nose, ears or blood in the stool or urine.

Dengue has no cure, the fever and pain is treated with paracetamol. Don’t use aspirin as it may aggravate bleeding.

Platelet transfusion may be needed if platelets fall below 10,000 platelets per microlitre of blood.

Protecting yourself from dengue and chikungunya

Wear clothes that cover your arms and legs.

Use mosquito repellent sprays, creams, coils, mats or liquids to drive away mosquitoes and use screens on doors and windows.

Wear loose clothes that cover your arms and legs.