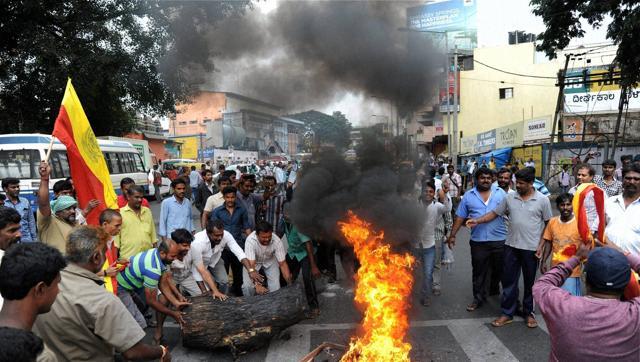 After 25 years, the Cauvery water dispute has managed to once again open the faultlines between Karnataka and Tamil Nadu: two states that are otherwise closely integrated with each other socially, culturally and economically.
For those who felt that the 1991 anti-Tamil riots in Karnataka was history and would not repeat in today’s globally-metamorphosed Bengaluru, the targeting of Tamil Nadu-related businesses and transport in the city and other parts of the state is cathartic. Kannadiga-centric violence in parts of Tamil Nadu and Chennai too has added to the sense of apprehension among the linguistic minorities in both states.
The 124-year-old Cauvery water dispute is among the rare water disputes that have never been satisfactorily resolved. The principal reason for this is that there is no dispute in distribution during adequate rain. The irony is that during a bountiful monsoon, a sizeable quantum of the river water ends up in the Bay of Bengal as the two states do not have the capacity to hold the river water.
The dispute only crops up when the monsoon fails, as it has happened this year. So the resolution of the Cauvery water disputes tribunal takes the form of distress-sharing. And, by definition any form of distress-sharing is always contentious at best and violent at worst. Because one wants to hold on to what is available while the other wants to extract the maximum. This is the nub of the Cauvery dispute.
What this essentially means is that the dispute can only be resolved by a high level of political statesmanship which includes generosity, understanding and a spirit of give-and-take on both sides. Sadly, if there is one element lacking in both states it is this urgently needed ability to defuse the crisis arising out of a shortage.
Until 1991, the dispute hardly touched the streets. The chief ministers of the two states would talk to each other and decide on the quantum of release and that would be that. Everything changed in 1991 during the chief ministership of S Bangarappa when the dispute turned into a Kannada-Tamil issue. Chauvinistic politicians on both sides used the opportunity to spread discord. Mainstream parties were unable to rein in the fringe elements while some even argued that they may have used these disturbances to further their political ends.
But 1991 managed to leave a lasting legacy: turning the Cauvery into a time bomb waiting to explode whenever the river runs short of water.
That the Cauvery dispute has the ability to turn an otherwise closely-integrated and historical Kannada-Tamil relationship into one of rivalry clearly indicates that the faultlines between the two remain. On one level, large sections of both live in each other’s state, work, marry and are enmeshed culturally. It is not uncommon for families to have both Tamil and Kannadiga-origin members. Movie stars from one state have made their mark in the other. In fact, Tamil Nadu Chief Minister J Jayalalithaa is from Mysore while superstar Rajinikanth, originally Marathi-speaking, is technically a Kannadiga having studied and worked in Bengaluru during his formative years. The examples are limitless.
On the other hand, there is also a section in Karnataka which resents what it sees as Tamil domination. In pre-independent India, the British brought in scores of Tamils from the Madras presidency and also housed Tamil soldiers in its cantonment in Bengaluru. So, historically Bengaluru is home to a large population of Tamils and, as it happens between communities, between the Kannadigas and Tamils there was rivalry, cooperation, prejudice, admiration, friendship and enmity all mixed in one complicated cocktail. Interestingly, physically, sartorially and behaviourally and in every other way including food habits it is next to impossible to differentiate between a Tamil and Kannadiga until either speaks their mother tongue.
Thousands of Tamil workers too over the years have settled in Bengaluru and in other parts of Karnataka engaged in construction labour and in varied industries. In 1991, following the riots, many fled to Tamil Nadu. It took months for the construction sector and other industries to return to normal as the workers trickled back once the violence had ended.
If what one is seeing is the dark side of that relationship, last year during the Chennai floods the very same relationship made Bengalureans including scores of Kannadigas the first ones to set up helplines, rush to the flood-hit city to help their brethren in distress--displaying a heart-warming positive side for the whole world to see.
The issue then is whether the street-level violence is going to make any difference to the Cauvery dispute resolution as laid out by the tribunal or the Supreme Court. The answer is a simple no. For, the interstate water disputes act of 1956 is one of the most potent in Indian law. None can prevent its implementation. If a state government prevents an order from being carried out, it can be dismissed without much ado. If people surround the reservoirs and physically try to prevent the water from being released, under the act, the military can be called in to implement the release.
In such a scenario, it is necessary for senior mainstream politicians and farmers from both sides to come together and figure out ways and means of resolving the dispute and permanently keeping it out of reach of fringe elements in both states.
You must log in or register to reply here.

Cauvery dispute: Section 144 in Mandya ahead of SC order

Despite Cauvery Water Dispute, Bengaluru Wastes Nearly 50% Of The Water It Receives From T