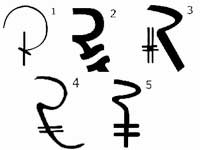 New Delhi, Jun 24: Indian rupee is poised to get a whole new identity as the union cabinet will be deciding on a unique identification symbol for the country's currency on Thursday, Jun 24.


This move to give the Indian rupee an iconic identity in the line of currencies such as Dollars, Pounds and Euros was inspired by the growing influence of the Indian rupee in global markets.


"In the ensuing year, we intend to formalise a symbol for the Indian rupee, which reflects and captures the Indian ethos and culture," Finance Minister Pranab Mukherjee said while tabling the Union Budget 2010-11 in the Parliament, after the decision was taken in 2009.

The finance ministry, which wanted the sign to reflect historical and cultural ethos of the country, sought designs from the public. The ministry has short listed five symbols, which are simple, easy to write and appeal to the Indian as well as international community.

The rupee has been signified by the abbreviations such as 'Rs' or 'Re'. But the same abbreviations were used to represent the currencies of countries like Pakistan, Nepal and Sri Lanka. The Indian Rupee is also represented as INR.
You must log in or register to reply here.
Similar threads