Staff member
BULLETT RAJA narrates the story of Raja Mishra [Saif Ali Khan], a commoner, who gets transformed into a notorious, care-a-damn attitude gangster. A faithful friend and a loyal lover, living life on his own terms, setting his own rules, commanding respect and fearing no one, Raja, in his true inimitable style, takes on the system that creates people like him.

BULLETT RAJA takes you back to the cinema of yore. A commoner revolts against the system and sets his own rules, shaking the law makers and entrepreneurs in the process. As he gets more and more 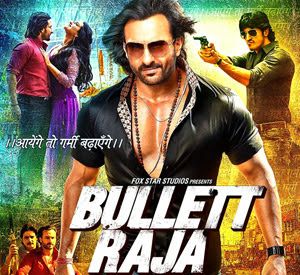 commanding and authoritative, the powers that be decide on clipping his wings... and eliminate him. Like several films made in 1980s and 1990s, BULLETT RAJA talks of a commoner who revolts against the very system he once devotedly followed. This is Tigmanshu's take on camaraderie, matters of the heart and sacrifice.

Tigmanshu's cinema has often existed in the pragmatic zone, besides being entrenched in the heartland/interiors, and BULLETT RAJA is no exception. It's raw, unrefined and harsh, much like Tigmanshu's earlier endeavors. Sure, the protagonist may bring back memories of the characters we've watched over and over again on the big screen, but the fact remains that everything happens for a legitimate, justifiable reason here. Notwithstanding the oft-repeated premise, the screenplay has ample twists and turns and leaves you wondering, what's gonna happen next? In fact, the games people play -- not just the politicians -- only envelopes you into the proceedings. The icing on the cake is the twist towards the penultimate moments.

BULLETT RAJA also works thanks to the dialogue [brilliant; also penned by Tigmanshu] and of course, the casting. Saif has often stolen the thunder from his contemporaries in varied films [recall OMKARA] and the actor, known for stylish, metro-centric characters, is sure to surprise you yet again. More on that later!

Hiccups? The film stagnates after a brilliant start. The portions in Mumbai and the song that ensues ['Tamanche Pe Disco'] is a put-off. Also, while the songs match the tone of the film, the soundtrack is plain ordinary.

Technically, this is amongst Tigmanshu's polished and genteel efforts. The background score is effectual, enhancing the drama at key points. Action sequences are realistic. Thankfully, there are no South-style stunts here!

Saif slips into the unconventional zone without a glitch. The actor delivers an unblemished performance, dominating every scene he appears in. He seems to have worked hard on getting the diction right, while the body language is impeccable as well. It's a seamless leap to look the character. Jimmy Sheirgill is admirable, essaying his part with absolute understanding. The bonding between Saif and Jimmy is simply splendid. Sonakshi Sinha is charismatic and does very well in the required space.

BULLETT RAJA is embellished with an exceptional supporting cast and each of them adjoin immense credibility to their respective characters. Vidyut Jammwal is luminous in a cameo. He adds solid muscle to the post-interval portions. Raj Babbar plays the scheming politician with incredible ease. Gulshan Grover is first-rate. Ravi Kissen is in terrific form, enacting the negative part with gusto. Chunkey Pandey leaves an impression in a brief role. Vipin Sharma is super. Deepraj Rana, Vishwajeet Pradhan and Sharat Saxena are perfect. Mahie Gill sizzles in the song and sequence.

On the whole, BULLETT RAJA is Tigmanshu Dhulia's most 'commercial', mass appealing film thus far. One more superior endeavor after the immeasurably acknowledged PAAN SINGH TOMAR and the vastly admired SAHEB BIWI AUR GANGSTER franchise, all of which belong to completely diverse genres of cinema. Enjoyable, engaging and extremely distinctive, BULLETT RAJA is not to be missed![/img]
You must log in or register to reply here.

Raja Chaudhari gets into a huge brawl with co-star!