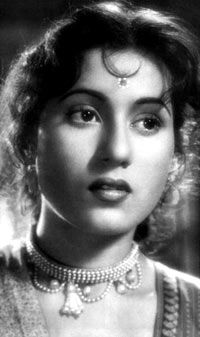 The word Madhubala means a damsel of honey. Their could not be any more appropriate summing up of the place of Madhubala in Indian imagination. Madhubala was without doubt the most beautiful Hindi Film heroine ever. And also perhaps the most underrated actress ever with her beauty attracting more attention than her performances.
Born in abject poverty, the 5th of 11 children, Madhubala began life in the film world as a child star, Baby Mumtaz, in films like Bombay Talkies Basant (1942). It was Kidar Sharma who gave her a break as heroine opposite Raj Kapoor in Neel Kamal (1947).
With her luminous beauty, she was snapped up by top filmmakers of the time and acted opposite all the major stars. In the initial days she was not considered much of an actress, it was rival Meena Kumari who won the acting honours.
However it was with the Bombay Talkies suspense thriller Mahal (1949) that Madhubala became a star. Aaega aanewala from the film remains her signature song till today! A spate of films followed opposite the top leading men of the day - Ashok Kumar, Rehman, Dilip Kumar, Dev Anand but by the mid 1950s when some of her major films like Mehboob Khan`sAmar flopped, Madhubala, the most beautiful actress in the country was declared `box office poison!` Further, she had gotten involved with Dilip Kumar and this took its toll on her as she could not face her father`s opposition of him and ultimately had to bow out of Naya Daur (1957) opposite him following a scandalous court case.
She bounced back career wise, looking as glamorous and sparkling as ever. She had a string of hits in Mr and Mrs 55, Phagun (the hit number Ek Pardesi Mera Dil Le Gaya), Howrah Bridge (Aaiye Meherban number), Kala Pani, Chalti Ka Naam Gaadi (Haal Kaisa Hai Janaab Ka), Kala Pani and the all time classic Mughal-E-Azam.

As the club dancer in Howrah Bridge Madhubala never looked more beautiful or alluring as she swayed to the seductive notes of Aaiye Mehrbaan. And she matched Kishore Kumar step by step in his madcap antics in Chalti Ka Naam Gaadi. However it was Mughal-e-Azam that saw perhaps her greatest performance as the doomed courtesan Anarkali. The film showed off the finely modulated depth she could bring to her performances if given the opportunity. It is an outstanding performance in an outstanding film.
Tragically by now she was diagnosed as having a hole in her heart and her illness forced her to abbreviate her career. She also plunged into a loveless marriage with Kishore Kumar and lingered on for nine years till her death in 1969.
She did have the odd release in this period like Passport (1961), Half Ticket (1962) and Sharabi (1964) but they were mostly old films that managed to limp towards release. In fact Jwala released almost two years after her death in 1971! She did try making a comeback oppositeRaj Kapoor in Chaalaak (1964) but collapsed on the sets on the very first day of shooting and the film was shelved.
After her death, she became a legend, and even today those who see her old films can”t but be charmed by those dancing eyes, the dazzling smile and sheer joie de vivre. Seeing some of her films now also reveals that she was underrated as an actress.