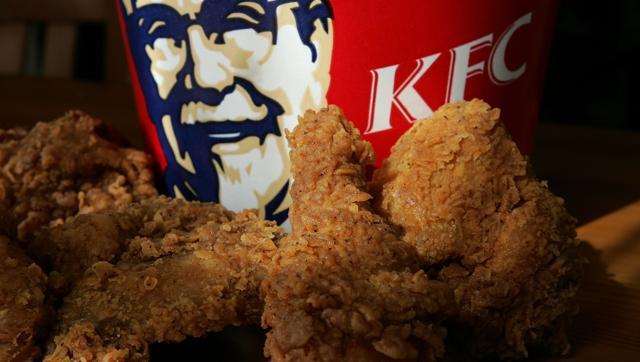 A section of Muslims and Hindus in Bhopal have come together to protest against global fast food chain KFC accusing it of hurting their religious sentiments.
While Muslims accused the multinational giant of serving ‘Jhatka’ chicken or meat in the name of ‘halal chicken’, Hindus have joined the protests to save cows, considered sacred animal by the community.
However, no scientific tests of the KFC food items were done by any of the groups.
KFC spokesperson denied the charges vehemently, saying, “KFC holds the highest respect for the law of the land and complies with all government rules and regulations. These accusations are baseless and seem to be driven with malicious intent to harm our brand.”
“We serve chicken sourced from reputed Indian suppliers like Venky’s and Godrej. We are always willing to provide consumers any clarifications they may require on the food served in our restaurants. We will be approaching the authorities to investigate this false propaganda and take appropriate action against those spreading misinformation,” the spokesperson said.

In Islam, meat obtained by severing the head of an animal instantly i.e. jhatka is considered diseased and not fit for eating. They have halal chicken or meat which is obtained by making a deep cut on the neck of a bird or animal from which blood is drained out completely.
On Friday, a joint group of protesters assembled at Iqbal Maidan and launched a signature campaign demanding a ‘KFC-free India’, with Shahar Qazi Syed Mushtaq Ali Nadvi and superintendent, Masajid Committee, Yasir Arafat appealing to people to take part in the campaign.
Anam Ibrahim who is leading the campaign claimed they had signatures of 50,112 persons and warned that if action was not taken against KFC, they would protest at the shopping mall in MP Nagar which has a KFC outlet next Friday.
Ibrahim and others had lodged a complaint at MP Nagar police station against the KFC outlet on August 6. However, KFC employees lodged a counter complaint against Ibrahim and others for their creating ruckus at the outlet.
In his complaint, Ibrahim said during Ramzan, when he sought a halal certificate from the KFC outlet, the staff showed him a certificate issued by a mufti in Mumbai Anwar Khan to a company named Venky’s, for only 1,000 halal chicken whereas, KFC outlets in the country sold 2,000 to 2,500 chickens per day on an average. It did not have any mention of KFC on it.

Hence, the company did not have any certificate for halal chicken and was cheating customers who might be eating the meat of any animal in the name of chicken, which the company bought from slaughter houses in various states, he said.
Talking to HT, Arun Chawariya of Balmiki Samaj, who joined the signature campaign, said his protest was to save cows.
“We will continue our campaign till KFC closes its chain in the country,” he said.
Nadvi told HT that KFC must declare if it was selling halal or jhatka meat, where it procured the meat, what meat it was, and also if it had any certificate in this regard.
“If they are transparent, we don’t have any problem. Then the option will lie with the consumers if they wish to have the kind of meat offered by KFC with a declaration,” he said.
SP Anshuman Singh said police were looking into the complaints from both sides.
He said as far as Ibrahim’s complaint is concerned he had also written to the Bhopal collector to see if it was a case of adulteration and violated provisions of Food Safety and Standard Act.​
You must log in or register to reply here.
Similar threads
12-Hour Hostage Situation In Bhopal Ends With Model Agreeing To Marriage
Arunoday Singh marries long time girlfriend Lee Elton in Bhopal
Bhopal: SC hearing on harsher charges
Bhopal victims to get Rs. 71.28 cr. more
Bhopal tragedy: Keshub Mahindra gets bail
Share:
Facebook Twitter Pinterest WhatsApp Link
Top