NOTE:- this thread is only for Bhagat Singh's Pics , wallpapers so avoid discussions or replies.... 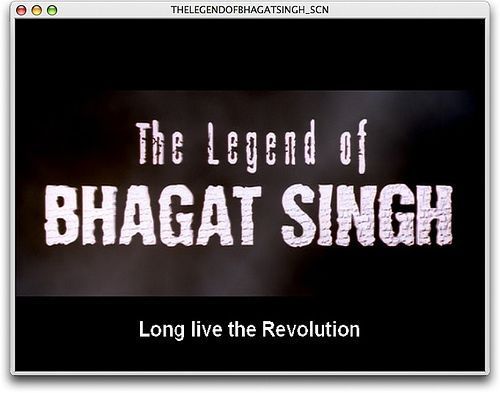 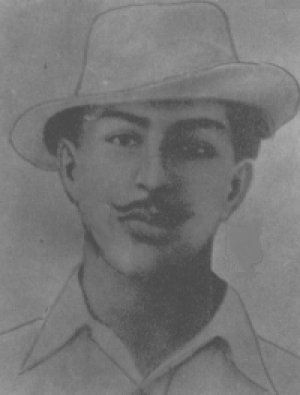 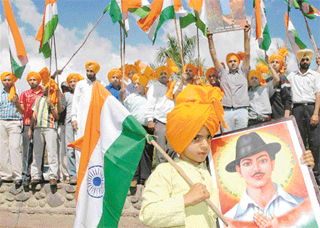 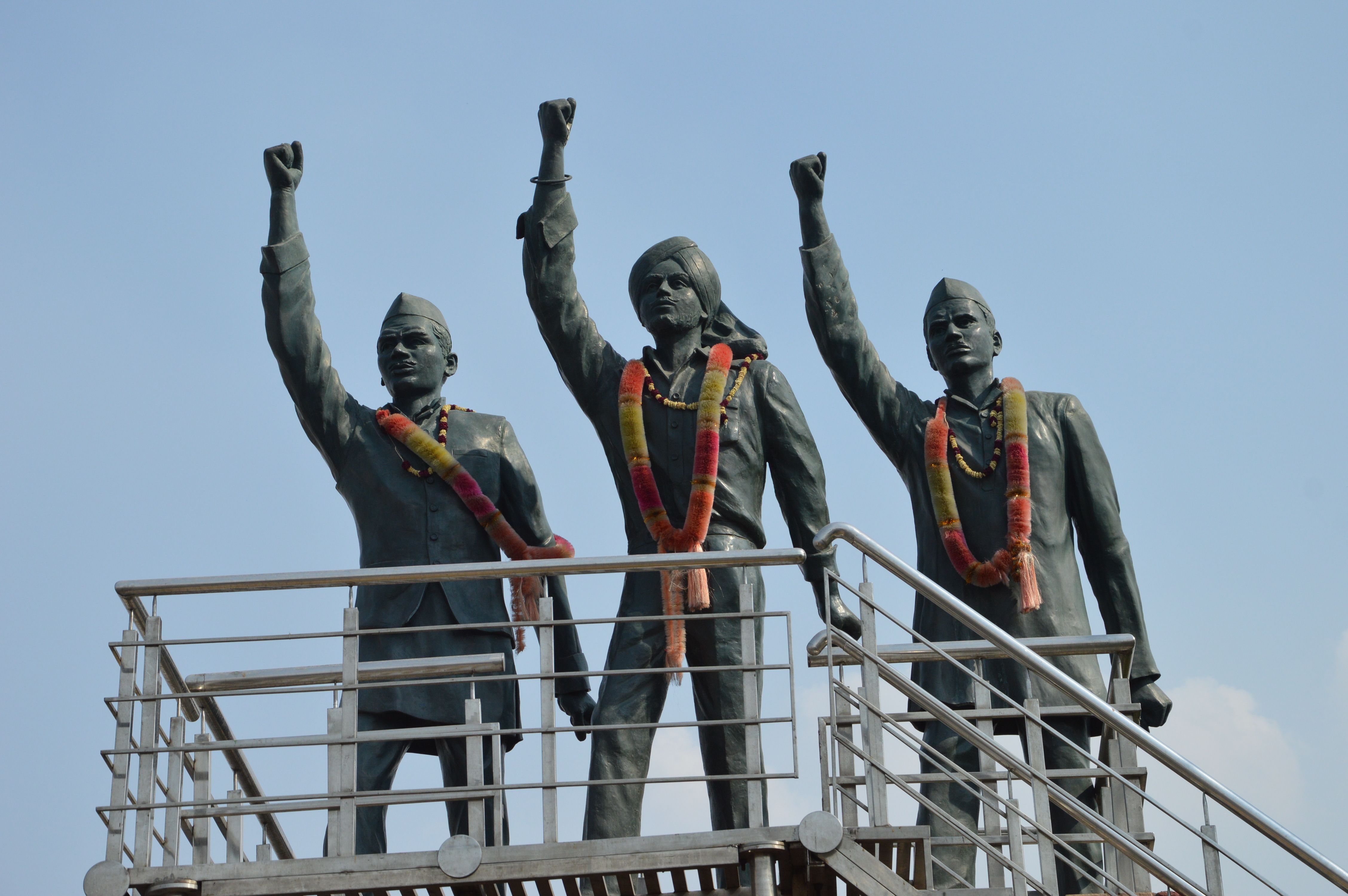 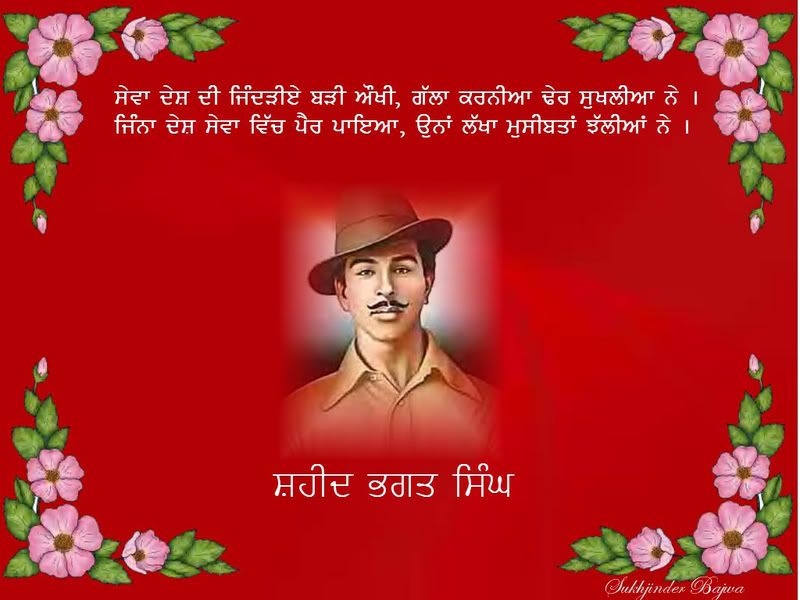 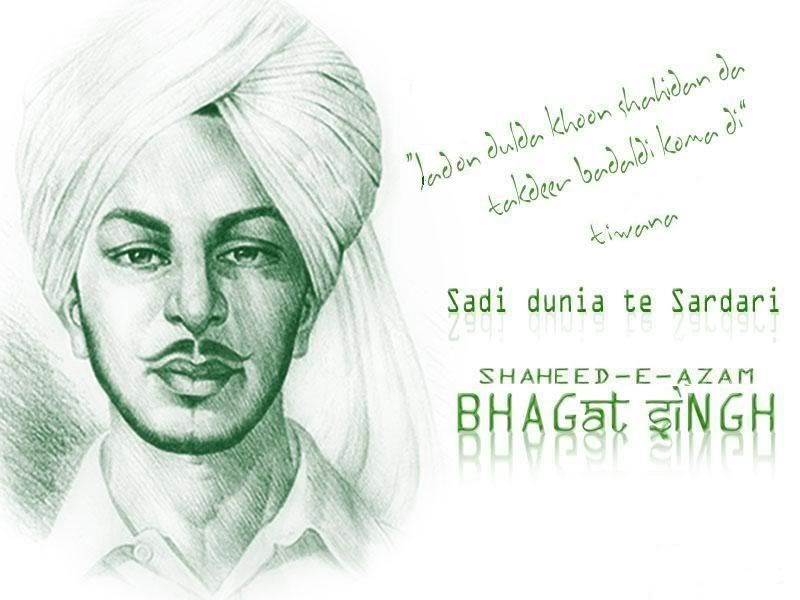 NOTE:- this thread is only for Bhagat Singh's Pics , wallpapers so avoid discussions or replies....

Can I Add Some Info About Bhagat Singh...??? 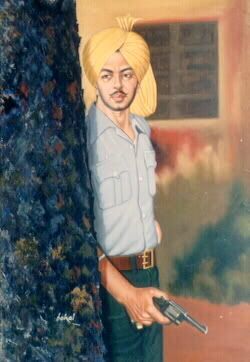 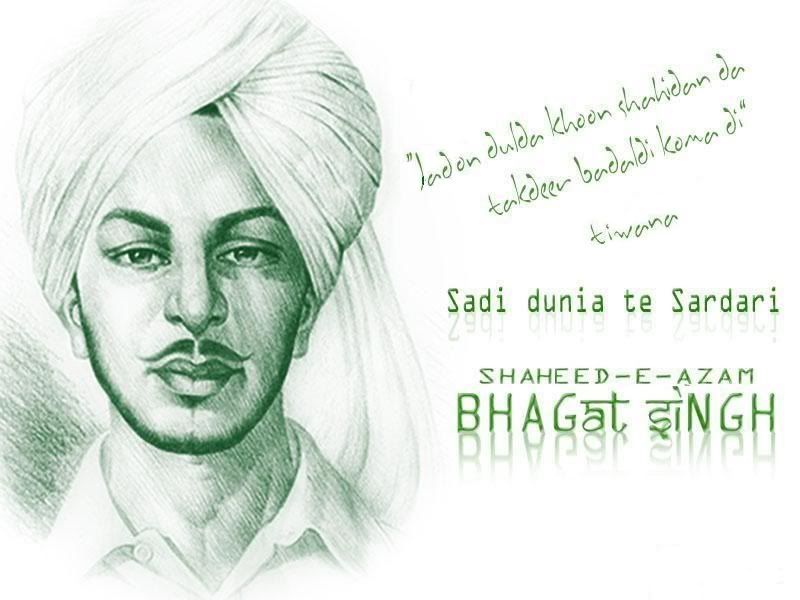 He is the symbol of the heroism of the youth of India. A revolutionary He threw a bomb when the Legislature was in session to warn the British Government. He was put to death but lives in the hearts of his countrymen.

One evening a boy of three was out for a walk with his father. There was also an elderly man with the father. Chatting they walked on and went beyond the village. Green crop delighted the eyes. The elders were walking along the edge of a field. Not hearing the footsteps of the boy, the father looked back. The boy was sitting on the ground and seemed to be planting some thing. The father became curious.

"What are you doing?" said he.

"Look, father, I shall grow guns all over the field" was the innocent reply of the boy. His eyes shone with the strong faith that guns would grow in the field. Both the elders were struck with wonder at the little boy's words.

The boy was Bhagat Singh who later fought like a hero for India's freedom and sacrificed his life.

Banga was a village in Layalpura district of Punjab province. A brave man, Sardar Kishan Singh by name, lived there. Vidya vati was his wife. Kishan Singh's family was noted for bravery and love of adventure. Many heroes of his family had fought to free India from the British. Such fighters are called revolutionaries. Kishan Singh too was a revolutionary. His younger brothers, Ajit Singh and Swaran Singh, too, had fought to drive the British out of India. Kishan Singh, Ajit Singh and Swaran Singh had all been sent to prison by the Government.

In those days such a revolution hadspread all over the country. People were full of determination to win freedom. It was at such a time that Bhagat Singh was born (on September 28, 1907). He was the third son of Sardar Kishan Singh and Vidyavati. At the same time, Kishan Singh and the Uncle Swaran Singh were freed from the jail. It was learnt that another uncle of his, Ajit Singh, too, would be freed. As he thus brought good fortune to his family the child was named Bhagat Singh. 'Bhagat Singh' means 'the fortunate'.

A Friend to All

Bhagat was a lovely child. His smile was charming. People used to say that he would become very famous.

His mother Vidyavati's life had been full of sorrow right from the beginning. The revolutionary husband would always be away. Always lurking in Vidyavati's mind was the fear that he might at any time be sent to jail. It was a family of fighters for freedom and one or the other would always be in jail. Vidyavati herself had to look after the affairs of the family. At such anxious times, her children were her only comfort. They were intelligent and brave and this made her forget her misery. Bhagat Singh was her favorite.

Bhagat Singh was admitted to the primary school. From his childhood he was highly interested in studies. He was ahead of the others in his class. He used to write a beautiful hand. He was the favorite pupil of his teachers. Very much liked by his class- mates, he was their leader. Big boys used to carry Bhagat Singh on their shoulders to the school and back home. His childhood itself indicated that later he would become a leader of revolutionaries.

Bhagat Singh easily made friends with one and all. His companions were naturally his friends. But cartmen and coolies, and the very men who swept the streets were his friends.

Once clothes had to be stitched Bhagat Singh. The old tailors who stitched clothes delivered them at the house and went away. "Who is that who brought the clothes?" asked mother, Vidyavati.

"What! Is the tailor, too, your friend?"

"Yes, every one in the village is my friend" was Bhagat Singh's reply.

Thus the ability to win the hearts of men grew in Bhagat Singh right from his childhood.

Bhagat Singh had two uncles. Of them, Swaran Singh had again been sent to prison by the British. Life in prison was wretched and he fell ill. His health did not improve even after his release and he died. When Ajit Singh came out of the jail, he left the country. Bhagat Singh's aunts would often recall their husbands' misery, and lament over it. Seeing this, Bhagat

Singh would bravely say, "Don't weep, aunt. When I grow up, I will drive out the British and bring back my uncle. I will take revenge upon the British who are the cause for my uncle's illness." On hearing the heroic words of the little boy, the weeping women would burst into laughter. At least for the moment they would forget their sorrow.

When he was in the fourth class, Bhagat Singh asked his classmates, "What do you wish to become when you grow up?"

Each boy gave a different answer. "I intend becoming a doctor," said one. Another said, "I will be a government officer." Still another would become a merchant; while another 'would marry'. Bhagat Singh remarked, "is marriage a big achievement? Anybody can marry. On the other hand, I will drive the British out of India."

Thus patriotism flowed in his veins from the days of his childhood.

By the time he completed his secondary education, Bhagat Singh knew everything about the revolutionaries of his family. He had read all the records about them at home. And the desire to fight for the country's freedom grew strong in him.

Bhagat Singh finished his primary education at Banga. Next he went to Lahore to join a secondary school. The patriot Kishan Singh did not want to admit his son to a school run by the followers of the British. So Bhagat Singh continued his studies in a private school.

Bhagat Singh was a village boy. His father was afraid he would lag behind in his studies. So he engaged a teacher to teach him at home. But within two days the teacher saw how intelligent the boy was. "What can I teach this boy?He has already learnt everything," said the teacher to Kishan Singh.

Bhagat Singh took to his studies with great zeal. His teachers wondered at his intelligence. He scored good marks in subjects like history, geography and arithmetic. But he had a bad score in English - 68 out of 150! It must have been because he had always hated the British! His words in his letter to his grandfather are really interesting: "My score in English is 68 out of 150.

A score of 50 is enough for a pass.Thus I have passed with credit." That was how the clever boy stated his low score in a round about manner.


A Spark of Revolution

It was the year 1919. A very tragic event happened in India that year.British soldiers opened fire on a gathering in Jallianwala Bagh, and kept up the fire for quite some time. There was no way of escape for the
people. Countless persons -grown-up men, women and little children -fell down dead. Blood flowed like a stream. The event caused terror and anger in the minds of people all over the country. The tragedy drew the attention of the entire world.

Bhagat Singh was then twelve years old; his mind was deeply disturbed by this event. The next day he did not return home after the school hours. His people at home waited and waited and grew anxious.

Instead of going to school, Bhagat Singh went straight to the place of the tragedy. Somehow managing to push through the police on guard, he went in. He collected a bottle of mud wet with the blood of Indians and returned home. Seeing that he was late, his younger sister said, "Where were you all this time? Mother has been waiting to give you something to eat." But Bhagat Singh was not at all thinking of food. Showing the bottle in his hand, he said, "Look here. This is the blood of ourpeople killed by the British. Salute this."

Then he put the bottle in a niche a worshipped it with flowers.

The people who had assembled in Jallianwala Bagh carried no weapons. Nor was there a way to escape from the place. And these people were killed by the British bullets! Such were the thoughts working in the mind of Bhagat Singh. The feeling that somehow the British must be driven out of India became firmer.

" That was the time when the Indian National Congress was fighting for the country's freedom. It awakened the people's love for their country and was uniting the people. Even before entering the ninth class, Bhagat Singh decided to take up this work. He was only thirteen.

Bhagat Singh told his father of his decision and asked for his permission. Himself a revolutionary, Kishan Singh willingly gave his consent. Bhagat Singh left the school and joined the movement.

At that time, there was a powerful anti- foreign cloth movement in the country. If foreign cloth is bought, other countries are benefited. In order to end this, we have to wear cloth made in our country. Foreign cloth must be burnt - so the leaders taught. Bhagat Singh took part in this movement with zeal. Right from his early days, he used to wear only Khadi. With what zeal he helped the cause of homemade cloth and burnt foreign cloth! Every week he would collect foreign clothes, heap them up and burn them.

In 1922, the Congress organized a procession in the town of Chauri chaura in Gorakhpur District. Then some rogues locked up twenty-two policemen together in a house, set fire to the house and burnt them. Before this, similar acts of violence had occurred even in Bombay andMadras. Mahatma Gandhi felt very sad at all this. He asked the people to end the non- cooperation movement which was then going on in the country.

That was a great disappointment to young Bhagat Singh, a lad of fifteen. Should an important movement be given up, just because 22 persons died? Before that, a nineteen-year-old revolutionary by name Kartar Singh had been hanged by the British Govemment. Then none of these supporters of nonviolence raised any objection. How could nonviolence become so important now? Such thoughts weakened Bhagat Singh's faith in non - violence and non-cooperation movements. He went on firmly believing that armed revolution was the only practical way of winning freedom.

He made a deep study of the lives of the revolutionaries of Ireland, Italy and Russia. The more he read, the deeper grew his belief that war alone could bring freedom. The youth of the land should be inspired to turn to revolution. The very thought of fighting for freedom should thrill the young men. So thinking, Bhagat Singh began to organize the youth.

To continue his studies, Bhagat Singh joined the National College. This college had been started by great patriots like Lala Lajpat Ray. Though he had not been to school for some years, Bhagat Singh had a good knowledge of history and politics. The Principal was astonished and permitted him to join the college straight away.

During the day he would listen to the lessons in the class. In the evening he would collect several friends and discuss the coming revolution. This became his daily routine.