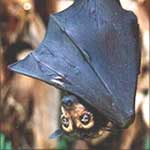 Missing: Dr Shilton says it is important the bats are found because they are vulnerable. (ABC)

By Melanie Christiansen for The World Today
Scientists in north Queensland cannot figure out what has happened to all the bats that usually populate the region.
CSIRO bat researcher Louise Shilton says up to 50,000 spectacled flying foxes have not been seen since a week after cyclone Larry tore through north Queensland.
"Typically we'd be seeing animals at a number of sites throughout the wet tropics at this time of year and we're not seeing them in anywhere near the numbers we'd be expecting," she said.
Dr Shilton says the scientists have evidence that the bats have not been killed.
She says it seems the bats are simply missing.
"It may sound quite funny and I can understand why people would think that was quite amusing and it is, it's a conundrum really," she said.
"I mean how do you lose that many animals and as you know, when they're congregated in large numbers during the day time they're very visible, vocal animals.
"So it's really anyone's guess at the moment whether they've gone perhaps into continuous tracts of rainforest where people just aren't seeing them, if they could've gone further inland into drier country and they could be co-roosting with other species, such as the little red flying fox and the black flying foxes."
Dr Shilton says it is an important mystery to solve because the spectacled flying fox is listed as vulnerable to decline.
"In terms of the conservation and also the management of these animals we really need to know where they are," she said.
"If we don't know where the animals are then we can't provide any form of reasonable population estimates.
"So it's important that we do keep track of them so that we can obtain and provide the best information on how many animals there are but also what type of habitat they're using and what is needed for them."
Growers pleased


But the news that the bats are missing comes a relief to some fruit and vegetable growers in north Queensland.
Shane O'Connor, a lychee grower who lost his crop in the cyclone, is pleased the flying foxes are not around at the moment.
But he is convinced they will be back.
"These animals have been around for thousands of years and this is not the first cyclone that they've come across," he said.
"We have huge areas of rainforest north of here all the way up Cape York Peninsula and I think it's fairly reasonable to assume that this has all happened before and that the flying foxes will be fairly safe somewhere."
You must log in or register to reply here.
Similar threads
It was obvious i had to bat longer, says Sehwag
Tendulkar to use new bat for semi-final
Nehra, Harbhajan back as India bat
Fit-again Gambhir keen to contribute with bat
Punjab News Chowkidar Special : ਅਸਲ ਚੌਕੀਦਾਰਾਂ ਦੀ ਸਿਆਸੀ ਆਗੂਆਂ ਨੂੰ ਝਾੜ
Share:
Facebook Twitter Pinterest WhatsApp Link
Top