Bamboo pierced through chest, docs save man in 3-hour surgery 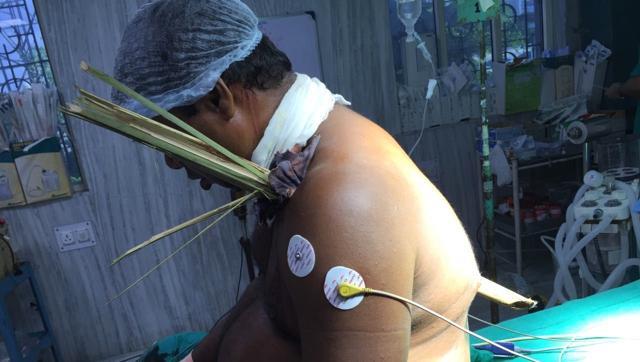 A team of doctors at the state-run SSKM Hospital gave a new life to a 50-year-old man on Thursday by removing a 3-feet long bamboo that had pierced the left side of his neck and come out from his back in a three-hour-long complex surgery. The patient is now undergoing treatment and has been kept at the hospital’s intensive care unit on ventilator.
The incident has brought back focus on goods vehicles carrying construction material like iron rods and bamboos that usually protrude from the vehicles, posing grave threat to the lives of other drivers.

In a similar incident in 2008, a team of doctors from the Calcutta Medical College led by surgeon Dr Mrityunjoy Mukherjee had saved the life of another driver by removing a 5-feet long iron rod that pierced his chest.
Lakshmikanta Ghosh, the driver of a private bus, was brought to the SSKM Hospital emergency around 11.30 pm on Wednesday. The bus had met with an accident at Heria in West Midnapore district after the driver hit a bamboo-laden truck from the rear. One of the protruding bamboos pierced Ghosh’s body. He was driven around 100 km to SSKM Hospital.
As soon as the injured Ghosh was brought to SSKM, hospital authorities formed a team of doctors led by cardiothoracic surgeon Prof Prakash Sanki, who operated on Ghosh and successfully removed the bamboo stick protruding from his body.

“He is stable but will be kept under observation for 48 hours. It was a critical surgery because the patient could not lie down on the operating table,” Sanki said, adding.
“There was no way to administer general anaesthesia drugs because the surgery had to be done with the patient sitting. He was under severe pain and was bleeding profusely,” said Dr Arnab Maiti, another surgeon in the team, adding, “After much discussion, we managed to create an opening through the neck into the patient’s windpipe. Then he was given general anaesthesia drugs for the operation. But the entire procedure was very critical because there was a huge lacerated injury on his neck.”Maiti.
“Thankfully, the bamboo caused no harm to the patient’s heart and lungs,” Dr Sanki said.
You must log in or register to reply here.
Share:
Facebook Twitter Pinterest WhatsApp Share Link
Top