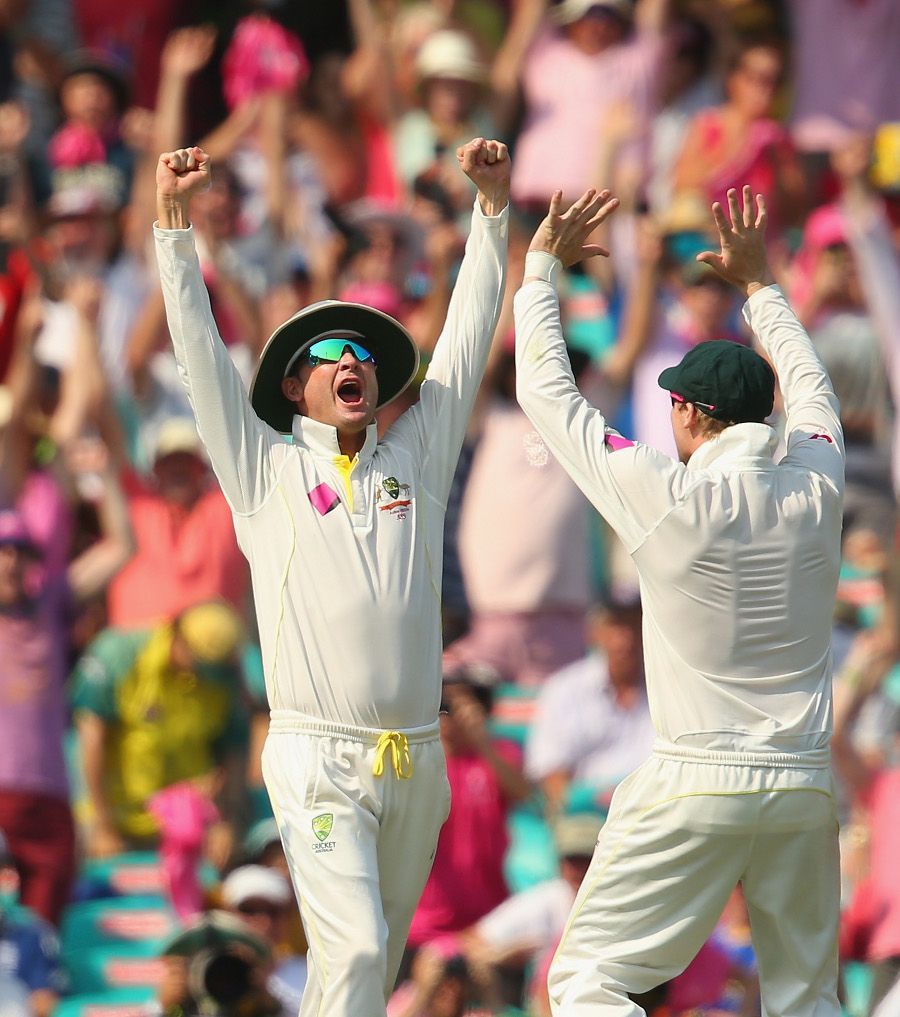 The Australian team go on a lap of honour waving to the crowd.
Gee! England have lost all 100 wickets this series. Take that! Such has been the dominance of the Aussies. Three down at the Tea break, England would have hoped to delay the inevitable by one day but Mitchell Johnson was right on the money in the very first over after the break. He removed Michael Carberry and Gary Ballance in the same over before Nathan Lyon reduced the visitors to 95/7 with the wickets of Jonathan Bairstow and Scott Borthwick in the very next over. Ben Stokes and Stuart Broad batted aggressively for a while but Ryan Harris came back to remove both in quick succession. The SCG was on its feet anticipating a wicket any time to complete the whitewash and Boyd Rankin didn't make them wait too long. He nicked one off Harris to skipper Michael Clarke at second slip, who fittingly hung on to a good grab, threw the ball as high as he could to lead the celebrations.
Great scenes out there. The entire Australian team get into a huddle right on the pitch. Nathan Lyon leads them into the team song standing in the centre and they jump in joy. Mitchell Johnson grabs a stump. David Warner jumps onto the back of Brad Haddin and shouts, 'you beauty, you beauty!'. The players go around the ground alongside the boundary ropes. Clarke, Haddin acknowledge the cheer from the crowd. The entire team management get down to the ground and congratulate each other. Now the England team climb down the stairs and shake hands with the Australians.

Michael Clarke was asked at the toss if he knew which two captains had led Australia to 5-0 Ashes clean sweeps. Yes, Warwick Armstrong and Ricky Ponting, he replied. Now there are three. Fittingly, it all ended in Clarke's hands. England's No.11, Boyd Rankin, edged Ryan Harris to second slip, where Clarke thrust his arms and clung on to a catch above his head. With it, he sealed a 282-run victory and a 5-0 result.

The celebrations were intense and immediate; Nathan Lyon led the team in their victory song on the pitch barely minutes after the win was complete.

Tea England 155 and 3 for 87 (Carberry 43*, Ballance 7*) need another 361 runs to beat Australia 326 and 276 (Rogers 119, Borthwick 3-33)
England's top order again offered little resistance as Ryan Harris and Mitchell Johnson bowled Australia to within seven wickets of a 5-0 clean sweep in Sydney. Chris Rogers scored his third Test hundred before lunch and the Australians were bowled out soon after the break, leaving England in need of 448 for victory, which would be the highest successful chase in Test history. By tea, it looked like there was a chance they might not even push the match into a fourth day.

At least Michael Carberry was showing some fight and went to the break on 43, alongside Gary Ballance on 7. But with the total at 3 for 87, the Australians knew that a couple more wickets and it could all end with a rush. Johnson picked up the first wicket when Alastair Cook (7) prodded outside off and edged behind off a quick ball that moved away, and it rounded out a disappointing series for the England captain.

Ian Bell made 16 before he steered a late cut off Harris straight to David Warner at gully and Kevin Pietersen managed only 6 before he too was a victim of Harris. Pietersen drove at a straight delivery and the ball flew off his inside edge on to his leg and lobbed over the head of short leg, but George Bailey was cool enough to backpedal and thrust his hand up in the air to take a one-handed catch that was celebrated by his team-mates.

Carberry played some nice, crisp strokes and had eight boundaries by tea, and was scoring at a brisk rate compared to his grinding innings in Melbourne. However, the most memorable moment of his innings came when his bat snapped in half when he played a regulation forward defence to a delivery from Harris, and while everyone on the ground saw the funny side, the image of a broken bat somehow seemed to encapsulate England's whole campaign.

Earlier, the Australians cruised to 276 in their second innings. The last three wickets fell within 20 minutes of the resumption of play after lunch as the tail-enders went for their shots, and England's two debutants, Scott Borthwick and Boyd Rankin, finished the innings off with wickets to their names.

In just over a session of lead-building the Australians added 136 to their overnight total, with Rogers and Bailey both ticking the scoreboard over during their 109-run partnership. Rogers reached his century from the last ball before drinks with a late cut for four off the part-time spin of Pietersen, who was given four overs by Cook, and it was the second century in consecutive Tests for Rogers.

However, it was Bailey who really needed a big score in order to retain his place for the upcoming tour of South Africa, and he was at times still vulnerable outside off but it was the short ball that brought his downfall on 46. Bailey went for a hook off Stuart Broad and was caught by Borthwick running around to deep square leg, and it left Bailey with an average of 26.14 from his five Tests and an uncertain future.

The crowd then enjoyed a little cameo from Brad Haddin, who was in his usual aggressive frame of mind and struck three boundaries on his way to 28. His innings ended when he played on trying to sweep a Borthwick full toss but he had scored enough runs to break the record for the most runs in a Test series by an Australian wicketkeeper, surpassing the 473 that Adam Gilchrist made in South Africa in 2001-02.

Johnson was bowled in the following over, walking across his stumps and trying to whack Ben Stokes from around the wicket through the leg side. After lunch, the Australians added a further 28 runs for the loss of their last three wickets. Borthwick took a return catch when Rogers, on 119, got a leading edge trying to flick the ball through the leg side.

Harris made his intentions clear when he slog-swept Borthwick to deep midwicket, where Carberry made good ground running around to his left and caught the ball, but just over the boundary. However, next ball Harris made slightly weaker contact and Carberry took the catch inside the boundary.

Rankin then finished things off with his maiden Test wicket, Peter Siddle caught behind off a short ball. It left England needing the highest successful run chase in Test history - or two days of rain - to avoid a 5-0 clean sweep. 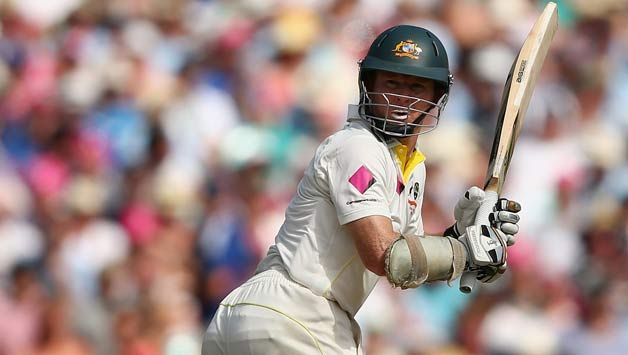 Ryan Harris is the Man of the Match