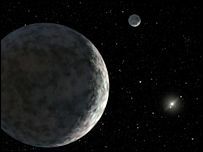 Eris gave rise to discord within the astronomical community

The distant world whose discovery prompted leading astronomers to demote Pluto from the rank of "planet" has now been given its own official name.
Having caused so much consternation in the International Astronomical Union (IAU), the object has been called Eris, after the Greek goddess of discord.
Eris is larger than Pluto, which put scientists in the fix of having to call them both planets - or neither.
Both bodies have now been put in the new classification of "dwarf planets".
Eris' discoverer, Michael Brown of the California Institute of Technology, told the Associated Press that the name was an obvious choice, calling it "too perfect to resist".
In mythology, Eris caused a quarrel among goddesses that sparked the Trojan War. In real life, Eris also caused strife, forcing scientists to produce a strict definition of the term planet - and that eventually led to Pluto losing the status it had held since its discovery in 1930.
The need for a strict definition was deemed necessary after new telescope technologies began to reveal far-off objects that rivalled Pluto in size. 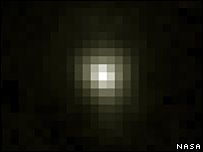 First seen in 2003 but finally recognised in 2005
Given the designation 2003 UB313 until formal naming
Highly elongated orbit around Sun lasting 560 years
Currently positioned some 14.5 billion km from Earth
Has extremely frigid surface temperature of -250C
May have thin atmosphere when closest to Sun
Is accompanied by a satellite now given the name Dysnomia

Without a new nomenclature, these discoveries raised the prospect that textbooks could soon be talking about 50 or more planets in the Solar System.
That prospect proved too much for IAU members who took the historic decision last month to redefine the Solar System.
Eris - initially given the codename "Xena" after a TV character - was discovered on 8 January, 2005, at the Palomar Observatory in California.
Its exact size is difficult to measure, being small and faint; Brown's team, using the Hubble telescope, found the object's diameter to be just 70km bigger than Pluto's. Another team, using a radio telescope in Spain, has measured Eris to be some 700km larger than Pluto.
Eris has a moon, and this too now has an official name: Dysnomia, the daughter of Eris known as the spirit of lawlessness.
The "new" Solar System agreed at the IAU's General Assembly has eight planets - Mercury to Neptune - and at least three dwarf planets: Pluto, Eris and the largest asteroid in the Solar System, Ceres.
Astronomers opposed to Pluto's demotion have launched a petition to try to get it reinstated. 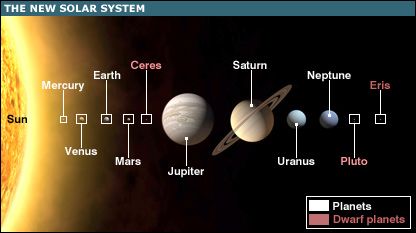 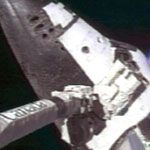 The 11-day Atlantis mission has been billed as the most complex station assembly work to date. (AFP)

Two space walking astronauts have freed a stubborn bolt that could have kept the International Space Station's (ISS) newly installed solar arrays from turning properly.
The space walk was the second of three planned during space shuttle Atlantis' week-long stay at the station which is slowly being assembled.
It is NASA's first assembly mission since the 2003 Columbia disaster.
"Whoo-hoo!" sang out one of the astronauts as the stuck bolt finally gave way.
Freeing the bolt broke a socket tool and required the combined muscle power of astronauts Dan Burbank and Steve MacLean, oversight from crewmate Heidemarie Stefanyshyn-Piper and advice from flight controllers at NASA's Mission Control at the Johnson Space Centre in the US.
Removing the bolt was essential for the station's new power-producing solar arrays to track the sun.
"We appreciate your answering that age-old question 'How many astronauts does it take to unscrew a bolt?'" astronaut Pam Melroy from Mission Control joked.
"Apparently it takes three, two outside and one inside. We're very pleased. You guys did an awesome job and that was great teamwork."
You must log in or register to reply here.
Similar threads