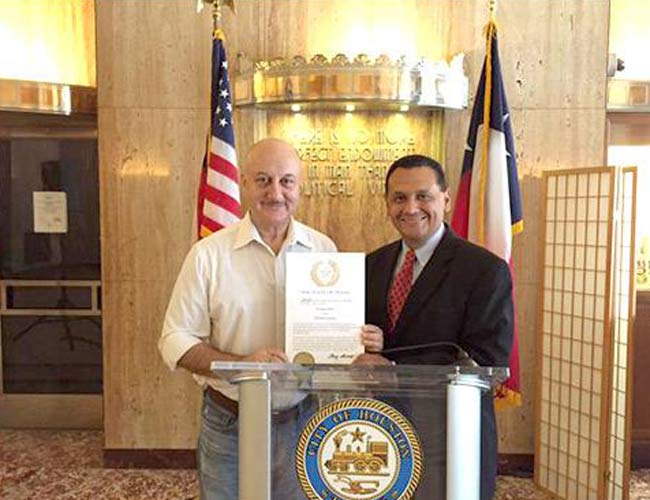 Veteran actor Anupam Kher has been presented with the "Honored Guest" award by the US state of Texas for his contribution to cinema and art.

The 60-year-old actor was honoured yesterday by Deputy Mayor of Houston Ed Gonzalez on behalf of Texas Governor Greg Abbot. This honour comes just days after he was conferred with a "Senate Proclamation" by The Texas State Senate.

The document read, "Anupam Kher is an Honored Guest of the Lone Star State. On the occasion of your visit, I extend a warm welcome to this land of great diversity."

Kher has been honoured with various awards and recognition for his contribution to cinema and art following a resounding success of the repeat show of his play "Mera Matlab Woh Nahin Tha" here and back-to-back shows in 15 other US cities and in Canada.

"God is kind. I feel honoured and proud as an Indian actor. America has been more than generous to me and my body of work. Getting honoured here is a wonderful reminder that my country has given me amazing opportunities to reach where I am today," Kher told PTI.

He ended with his famous catch word, "Jai ho".

Kher is off to west coast for a week-long performance there before ending his US Tour and flying back to India. Stellar performances by Kher and Neena Gupta in the play have earned them continuous accolades in US cities and Toronto and Vancouver in Canada since its first sold out event here on August 7. 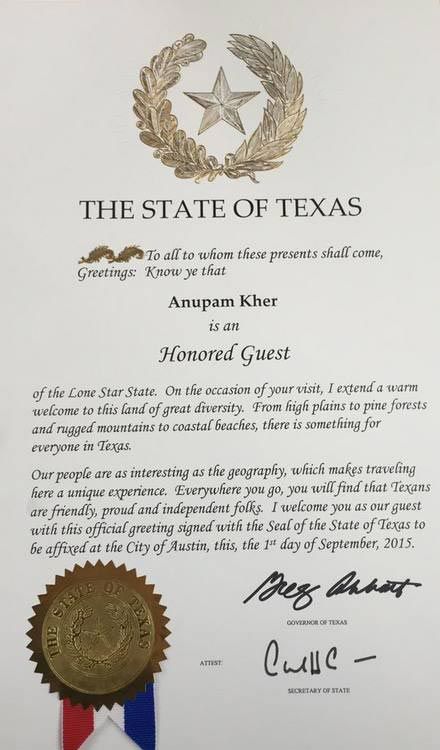 Due to the public demand, yet another sold out show of the production was played for the second time in Houston.

The "HeforShe" campaign has been initiated by UN Women.

Its goal is to engage men and boys as agents of change for the achievement of gender equality and women's rights, by encouraging them to take action against inequalities faced by women and girls.

The actor, a known Bollywood export in the US, has appeared in Hollywood films like "Mistress of Spices", "Bend It Like Beckham", "Lust, Caution", and "Silver Linings Playbook".
You must log in or register to reply here.
Similar threads